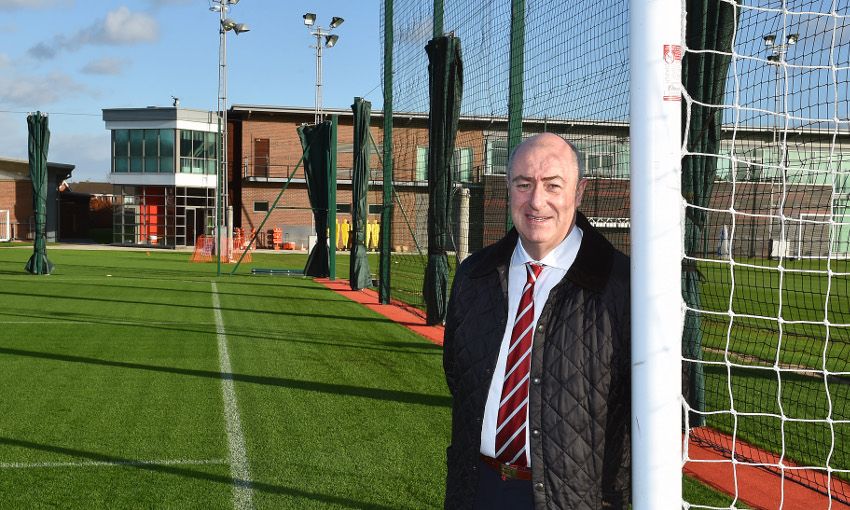 The man in charge of maintaining the hallowed Anfield turf is today leaving the club after 43 years of service.

Grounds manager Terry Forsyth, who oversees the playing surfaces at Anfield, Melwood and down at the Academy, began as an apprentice groundsman when he was just 17 before progressing through the ranks.

But now, at the age of 59, he has decided to call time on a lengthy spell of service to the club that has provided many fond memories.

“It’s been fantastic,” he told Liverpoolfc.com. “I’ve always enjoyed coming to work and embraced the changes of my job. I started here when Bill Shankly was manager and people here have always been friends.

“I can remember pretty much every day [of work]. It really seems like last year when I started. You have two ends to a year with this job. You have the calendar year-end and then the football year concludes, so it just comes round so quickly.”

Throughout his time with the Reds, Forsyth has been tasked with planting the seeds to produce a playing surface that will suit the style of the team under a number of different managers.

“Sometimes it amazes me where it’ll be raining for three days before a match and the managers want the pitch watered before kick off and at half time!

“And it can be minus four degrees and they want the pitch watered at half-time. That totally amazes me but we just have to fulfill whatever the manager asks for.

“The techniques have altered but the principles have remained the same, it’s just football. Different managers bring their own personality but there’s always the same basics of football.”

Since starting under the legendary Shankly as a teenager, Liverpool-born Forsyth has dealt with eleven different managers, though his time with new boss Jürgen Klopp has been brief.

“Bill Shankly was like your dad, he was a lovely man. All the managers were lovely.” he says.

“When Jürgen came on site, with me knowing that I was leaving, I kept in the background. Normally I would have been right in there saying who I was and introducing my staff. But I kept back and allowed Warren Scott - the head groundsman at Melwood - to build up a rapport with him.

“I went into Melwood a few days ago and saw Klopp, he didn’t know who I was and his first impressions from me were that you could tell that he’s a proper man with big stature.”

Although he has attended countless Anfield fixtures down the years, Terry's experience of matchday has been vastly different to that of the 45,000 supporters who have turned up to cheer their team on.

“I don’t watch the football, I watch how the pitch is playing.” he laughs.

“If I’m looking at a football match or there’s a game on TV, I look at the pitch and how it’s presented first because you can have a bad pitch that’s presented well, then I look at the bobble on the ball. I can tell everything from how it’s mowed and the colouring of the grass. I’m not going to change because it’s in your eyes! It’s that inbuilt ability.

“The supporters wouldn’t realise how much work goes into preparing a pitch for a game. You have to spike a pitch if you’re expecting rain or put the undersoil heating on. Growing lights have to achieve a certain amount of hours, the fertilizer has to go on to make the lights work and then you might get a fungal disease. It’s all forward planning and we’re looking at the correct window to get things done.

“It’s like a play, you do many things before if a game is on the Saturday. It slowly comes together throughout the week. It’s clockwork as you do things systematically. We all know what to do and the team works together.”

Forsyth believes that the playing surfaces remain in safe hands as he passes the reins onto his staff, who have been brought up on the same principles as he has.

“My staff are excellent,” he says. “I couldn’t have wished for three better heads of departments underneath me. My men like to achieve the correct standard. They will prepare a pitch as it’s required and they would get it done.

“I’m extremely proud [of what I do] but like all the qualifications that come to the club it’s not just one man. It’s like the footballers, it’s a team. I just gather all the loose ends together of all the different men and just present a team. It’s a team effort.

“They’ve been taught ‘The Liverpool Way’ like I was, so maybe that’s the correct way. The standard is perfect.

“‘The Liverpool Way’ is the compassion in your heart to work to the highest ability and achievement that you can and always perform and do your best.”