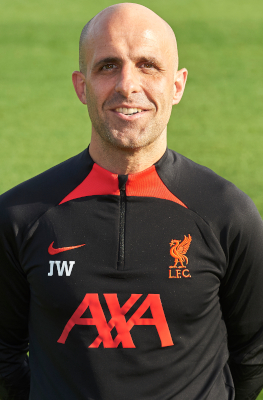 James Williams is the lead coach for pre-academy U5 to U8 age groups, and is also a regular coach with the U9 to U11 groups.

James was a professional footballer having spent four years at Swindon Town from 1998 to 2002 before an injury-plagued final season forced him to take a year out from football.

He was back in action in the summer of 2003 with Southport and also enjoyed spells playing non-league for Droylsden and Kendal Town before hanging up his boots following a failure to recover fully from an ACL tear in his left knee.

Williams said: "My playing highlights would be making my debut as a 16 year old in the Championship for Swindon and winning Conference North titles with Southport and Droylsden.

"Once I had finished playing I turned my attention to coaching and spent several years accruing coaching badges and gaining experience coaching at various age ranges, before being given an opportunity to join the Academy as a pre-academy coach in the summer of 2015.

"Besides my role as the lead coach for our pre-academy U5 to U8s, I also help identify and recruit the best five to eight year-olds from across Merseyside and the North West by organising school and mini-soccer events at the Academy.

"I feel blessed to call the academy my place of work and to have been given the chance to work with so many fantastic people."