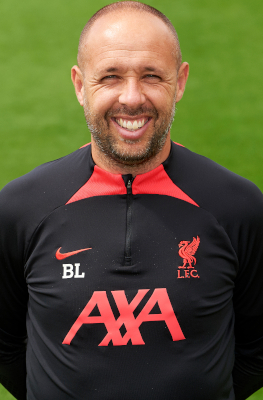 Barry Lewtas took over as U23s head coach in May 2020, a role which had been vacated by Neil Critchley's departure to Blackpool.

He arrived at Wigan Athletic in 2003 to work in their Centre of Excellence where he worked with players aged 10-13. He then moved to Bolton Wanderers in 2007 to work at their Academy, coaching boys aged 11-14 for six seasons.

During his time at both clubs he gained valuable experience working across various age groups.

In 2013 Barry moved to Kirkby to take the U12 group at the Academy. Since then he has been lead coach for the U10-U12 age group before heading up the U16 group.

Lewtas was promoted from coaching the U16s to becoming U18s manager in July 2018, filling the role vacated by Steven Gerrard.

In his first season with the U18s, Lewtas led the team to FA Youth Cup glory after they defeated Manchester City in the final on penalties.

Click here to read more about Barry's role at the Academy.

Click here to read more about Barry in our Behind the Badge feature.