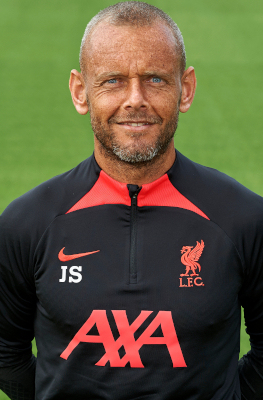 Jay Spearing made an emotional return to Liverpool FC in June 2022 when he returned to the Academy as U18s coach.

The former FA Youth Cup-winning captain, who first came to the club at the age of seven having been spotted playing for Wallasey based junior side Greenleas FC, will work alongside manager Marc Bridge-Wilkinson and Tim Jenkins.

Spearing graduated from Kirkby and made 55 appearances for the first team, including a start in the 2012 FA Cup final under his boyhood hero Sir Kenny Dalglish.

He made his senior debut against PSV Eindhoven in the Champions League in December 2008 and also featured in the 4-0 win against Real Madrid at Anfield.

After leaving the Reds in 2013, he went on to play for Bolton Wanderers, Blackburn Rovers, Blackpool and then joined Tranmere Rovers in 2020.

The 33-year-old was captain at the Wirral-based club before he announced his departure at the end of the 2021-22 season.

Speaking about Spearing's return, Academy manager Alex Inglethorpe told Liverpoolfc.com: "It's fantastic to welcome Jay back to the Academy and he will work with the U18s as a full-time coach.

"Jay will work with Bridgey and Tim and he will be actively involved on the training field with our young players.

"He will also be eligible to play for the U21s to provide experience for the young players when we need him.

"Jay is still quite young and the impact he can have around the U18s is invaluable because he is someone who lives and breathes this club.

"More important, Jay has played across all four divisions, so I think he will be a really good addition for us."