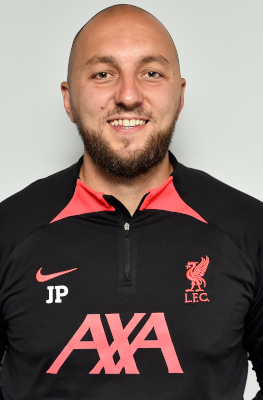 Joe Potts returned to the role of goalkeeping coach for Liverpool FC Women in the summer of 2021.

He had previously worked under manager Matt Beard during a six-year spell with the Reds that included back-to-back Women’s Super League titles in 2013 and 2014.

Potts departed to pursue opportunities in the men’s game and build his knowledge base, and jumped at the chance to work with Beard on Merseyside again.

“I’ve got 10 years’ experience in the women’s and men’s game now, as well as good relationships with the other goalkeeping staff at LFC with John [Achterberg] at the first team and Mark [Morris] at the Academy,” he said.

“They’ve kept tabs on my coaching career since I left Liverpool, including when I took a year out to travel round clubs, build relationships and speak with other people in my role to gain as much knowledge as possible.

“It was a very easy decision to come back to work with Beardy, he’s done a lot for me both professionally and personally.”