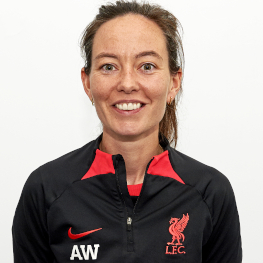 Whiteley stepped up to the position midway through the 2020-21 season, from her previous role as head coach of the U21s and technical director at the LFC Women Regional Talent Club.

She then served as the Reds' interim manager for the second half of the campaign following the departure of Vicky Jepson.

A UEFA A licence coach, she obtained her sports science degree at Northumbria University, where she later became head of women's football while also acting as head coach at Sunderland Ladies U21s.

A promotion to assistant first-team coach at Sunderland followed from 2017 to 2019, where Whiteley gained valuable experience in the Spring Series and later the Women's Super League.

Prior to joining the Reds in January 2020, Whiteley worked as part of the Football Association's Elite Coaching Menteeships Programme, working in a technical role with England U18s alongside Mo Marley.