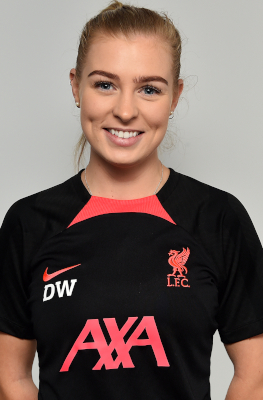 Danielle Williams took up the role of physical performance coach at Liverpool FC Women in July 2022.

She had previously linked up with the club the previous June as an intern, while completing a master’s degree in strength and conditioning.

Following her internship, Danielle continued to work with the Reds as a strength and conditioning coach on a casual basis, supporting the physical performance department as Matt Beard’s team lifted the FA Women’s Championship title.

Williams achieved her undergraduate degree – in sport and exercise science – and master’s degree at Liverpool John Moores University and has lived in the city ever since.

Her previous experience also includes aiding the preparation of a swimmer for the British Swimming Championships and Olympic trials, as well as delivering strength and conditioning programmes in women’s hockey.