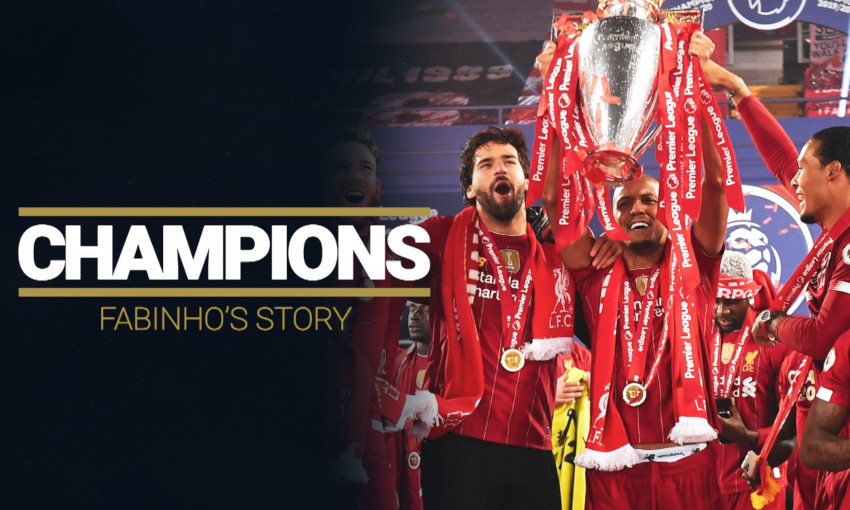 Being part of the first Liverpool side to deliver the Premier League to Anfield is an honour that makes Fabinho extremely proud.

Jürgen Klopp's team wrote another chapter in the club's illustrious history books this past season when they ended a 30-year wait for the top-flight crown.

Having also secured European Cup No.6 and the FIFA Club World Cup, Fabinho is excited at the thought of the class of 2019-20 being idolised in decades to come.

Watch our exclusive Champions interview with Fabinho in full on LFCTV GO now. You can start a free one-month trial of LFCTV GO now and this can be cancelled at any time.

"It's very important to us," the Brazilian told Liverpoolfc.com in an exclusive interview. "We may not have realised this importance yet but I think we will always be remembered because we were the first Liverpool squad to win the championship since it became the Premier League.

"This club has a lot of history and has won many trophies as well, but this one is perhaps a little bit more special due to the long period we've spent without a league title.

"Liverpool supporters have been waiting for this title for a long time and unfortunately they could not be inside the stadium with us, but certainly everyone in their houses celebrated a lot.

"We absolutely have to celebrate because the way we conquered, with the huge points difference between us and second place, is really something to celebrate."

Indeed, Liverpool secured the title with a record-breaking seven games remaining in the season and amassed the club's best-ever points total.

Fabinho puts the achievement down to the squad's strength in depth and win-at-all-costs mentality.

The No.3 continued: "Our consistency was crucial. The squad is very good as well. If any player left due to cards or injuries, the substitute always came on and did very well. Everyone was prepared.

"When you win a lot of games, your confidence increases. And our mindset, as I said, was so important because there were a few moments that we were not having our best day – maybe we were not performing better than the opponents – but we managed to find a goal to win games in the final minutes.

"I think all these things are crucial to create a champion-winning team."

The Premier League represents Fabinho's latest major honour collected as a Red since arriving from AS Monaco in the summer of 2018.

He's now on the hunt for more medals and trophies, while also further enhancing his special relationship with the club and its supporters.

"Liverpool is very important to me," he admitted. "When I decided to leave Monaco, I wanted to go to an important football club, that fought for huge goals, and here at Liverpool I managed to do all these things.

"I've also arrived at a football club where the atmosphere and the squad are great. I've learnt a lot from the technical staff as well.

"I've really managed to learn more at this club and understand the supporters' love closely.

"So I am very grateful for all these experiences I've had living here and I hope to achieve more."