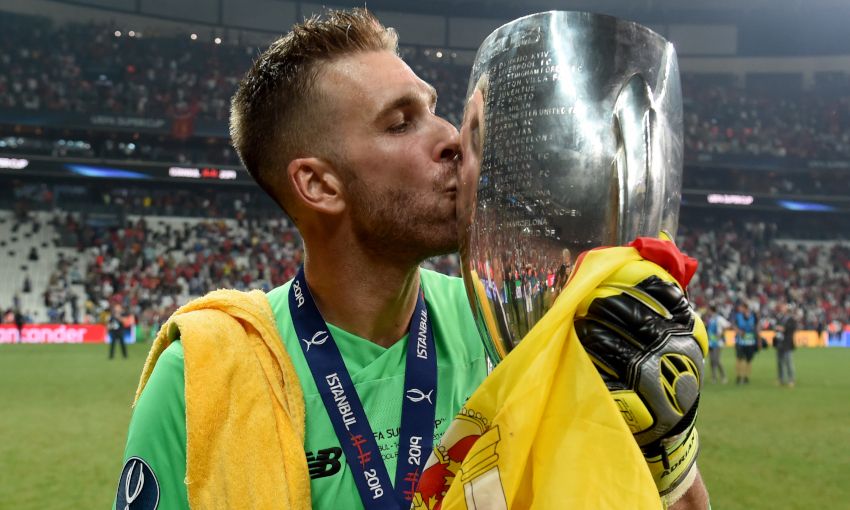 It's a story that prompted Rocky Balboa references from Jürgen Klopp.

“Adrian!” bellowed the Liverpool manager during a post-match interview after his side clinched the UEFA Super Cup by beating Chelsea on penalties in Istanbul on Wednesday night.

Minutes earlier, Adrian – on just his 10th day as a Reds goalkeeper – had blocked the 10th spot-kick of the shootout to assure the club’s second trophy of 2019.

Rocky himself would have been proud of such a turnaround.

A fortnight ago, Adrian did not have a team. He had spent the summer training individually in his home city of Seville having left West Ham United at the end of last season.

There were several options to join a new club but nothing had yet materialised into a move. Until, on the weekend of the Community Shield, a call came from the European champions.

What has happened since is, he admits, a dream.

“One month ago I was training by myself in Spain with my goalkeeper coach and friends helping me with the training,” Adrian told Liverpoolfc.com amid the celebrations at Besiktas Park.

“Two weeks ago I really didn’t know who I was going to sign for, whether in Spain or another league. But Liverpool came to me and asked me. It’s the best decision I’ve taken in my life now.

“I knew the moment was going to come but obviously not as quick as it has. I’m really happy to be here and really proud for the players to help me from the beginning. They opened their arms to make me feel like a great friend.

“It was a magnificent night.”

The 32-year-old had been somewhat harshly judged to have fouled Tammy Abraham in the area with Liverpool leading 2-1 in extra-time after a Sadio Mane double.

Jorginho stepped up to roll the spot-kick in and force a shootout to settle the 44th edition of the UEFA Super Cup, which the Reds had won three times previously.

Nine successive penalties were converted before Abraham faced Adrian from 12 yards – and the latter held out a leg to block the effort and secure the trophy for his new club.

“To be fair, the penalty is a bit of luck for the ‘keeper as well because you need to go for the right side and then do your best,” reflected the No.13.

“At that moment I went to my left but I waited until the end with my feet. I saved with my right one, an unbelievable save. All saves are great but this one at the end, the last one, is great.”

Within seconds of Adrian’s decisive stop, he was mobbed by his teammates. Klopp sprinted to his goalkeeper, too. And then there were joyous scenes with the travelling fans.

It was an outpouring of emotion that the manager later explained felt so natural. “I didn’t know before the game how good it would be when you win it,” he said. “But it’s brilliant, it’s really big.”

On the celebrations that followed his penalty save, he recalled: “I was down on my knees and just waiting for the boys to come to me, the manager also, all jumping.

“I need to see it on video because I saw so many people that jumped onto me but it was a magnificent moment to remember all of my life.”

Adrian’s instant Liverpool opportunity has of course come about due to the misfortune of a colleague, with Alisson Becker sidelined for the next few weeks with a calf injury.

By nature, the relationship between goalkeepers must involve a mix of competition and mutual respect to inspire the best form from each.

And the fledgling bond shared by the two was evidenced in a thoughtful pre-match message from Alisson to Adrian.

“A goalkeeper’s life is like this,” the latter said of the situation. “We need to be ready for everything and I knew Alisson did great last season and with the national team.

“But I came here to fight with him [for a place] and to push him. It’s a healthy competition which is great for us both and also the club and makes us much better.

“Ali just texted me this afternoon before the game and said, ‘Good luck amigo’ and I responded, ‘Thank you very much.’ It was very kind and I feel very comfortable working with him and I hope he recovers from the injury as soon as possible.”