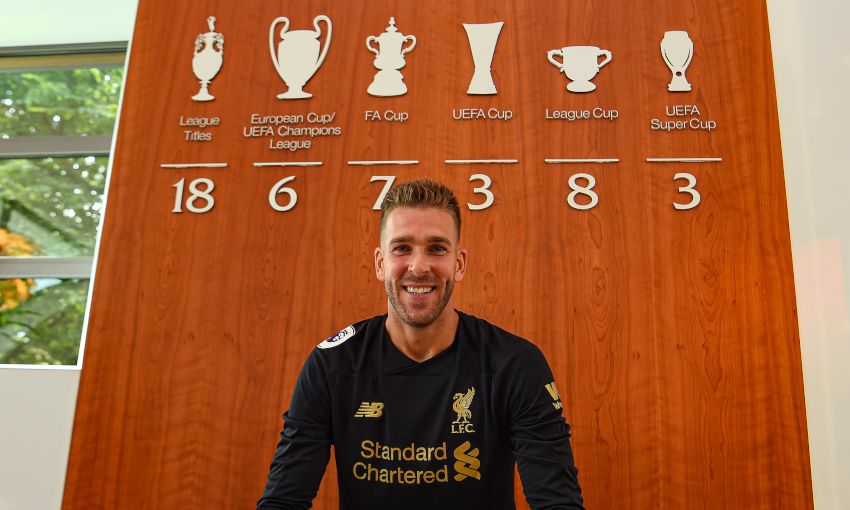 Adrian is determined to provide healthy competition for the benefit of Liverpool after sealing a free transfer switch to the club on Monday.

With six seasons’ experience in the Premier League at West Ham United under his belt, the Spaniard arrives on Merseyside eager to bolster the goalkeeping ranks following the departure of Simon Mignolet.

Shortly after putting pen to paper at Melwood, he spoke to Liverpoolfc.com about why the Reds represented the right next step in his career, his anticipation for working with Alisson Becker and why he’ll be sharing the big news with one of his Anfield predecessors.

Adrian, welcome and congratulations on your move to Liverpool. Tell us your feelings at the moment…

Hello and thank you very much. I’m feeling really happy; really happy to be here and to work in this great club and start doing my stuff on the pitch as soon as possible.

When did you get the call about potentially joining Liverpool?

To be fair, there was interest years ago, but the real interest was in the last few days. We spoke every day with my agent and we had other options to move, because I finished with West Ham as a free agent last season. Finally, the last call was yesterday was to go to London to do all the stuff. Obviously I’m really happy to be here.

Why is this the right move for you?

It’s a great step in my career right now, after six good seasons at West Ham. I got experience in the Premier League and I’m coming to a big club to fight for everything. It’s a good challenge, a big challenge for me to face, challenging with big players here.

You’re close to Pepe Reina, a very popular former Liverpool goalkeeper – have you told him about this transfer yet?

I didn’t speak to him because everything was a bit secret. When I signed with West Ham, I asked him to give me his opinion about the Premier League and he told me, ‘Go and show your level there because it’s a great league.’ Now I will speak with him, I’ll tell him the news as soon as possible. Obviously he was in love with Liverpool, all the fans love him. I hope I have a great career like him here at Liverpool and show that the Spanish level is on top.

Jürgen Klopp has said he likes to have two No.1s in the squad. Is that part of the appeal of coming here as well?

Yeah, I like a big challenge. It’s a big challenge for me to work with Alisson – he is in great form in the last few seasons, he’s showing he’s at a great level, one of the best in the world I would say. I’m happy to work; competition is great and makes us much better. I come here to fight, to give a push to him as well like a teammate, and also push for the No.1.

You had six years with West Ham in the Premier League. How did you evolve over that time?

It was a great experience, a good club with a massive fanbase. To live in London was great, the atmosphere in the club was very good. I played mostly all the seasons as No.1 until the last one. I can just say good words for the fans, for the club, for all my teammates and managers in my time there. I was really happy to take a step forward from Real Betis to West Ham in 2013 and now it’s a new chapter, we start writing the book at Liverpool and I hope I have a great career here.

How would you describe your goalkeeping style?

Spanish style! The Spanish style is in good form because we have very good ‘keepers. We mentioned Pepe Reina; David de Gea is in great form and we can see many good ‘keepers doing well around the world in all the leagues. I like to help the team from the back. Obviously we need to save goals but now the modern ‘keeper has to be very complete. I am still learning at my age, still learning and improving, but I think I have a great level to show and keep showing in the Premier League.

How much are you looking forward to working with Alisson Becker?

He’s a great ‘keeper, he’s doing very well. His first season with Liverpool was magnificent. I come here to have a competition with him, a positive competition that helps us to improve. The competition makes us better and I’m looking forward to working with him and the goalkeeping staff.

How important is it to have a strong relationship among the goalkeepers?

The goalkeeper relationship is special, it’s different because we train apart from the [other] players as goalkeepers. We spend a long time together so we need to have a good relationship. It’s the manager’s decision if he’s going to put you or the other in the No.1 spot, but both of us are fighting for the club and to make the club big. To fight and have that healthy competition with Alisson is going to be much better for the club.

Are you going straight into training and looking to be in the squad on Friday night?

I hope so. I’m ready, I was training for myself in the summer. This summer was a bit different as I finished my contract with West Ham, but I was training with my goalkeeping coach in Seville, doing a very good job with him and I’m more than ready to start training.

How much potential do you see for Liverpool this season?

You’ve played at Anfield a couple of times with West Ham. What are your memories of playing there and what the atmosphere is like?

Probably the memories are not the best because we didn’t win a game I think when I was playing! Obviously the atmosphere is magnificent. It’s one of the best stadiums not just in the Premier League, I would say in the world. The fans are great. Every time you play in Anfield, it’s a different thing. You feel that crowd pushing from there, not just when the team are doing well, also when the team is in a bad moment and they push hard. I’m looking forward to playing the first game there to say hello to the fans from the stadium. 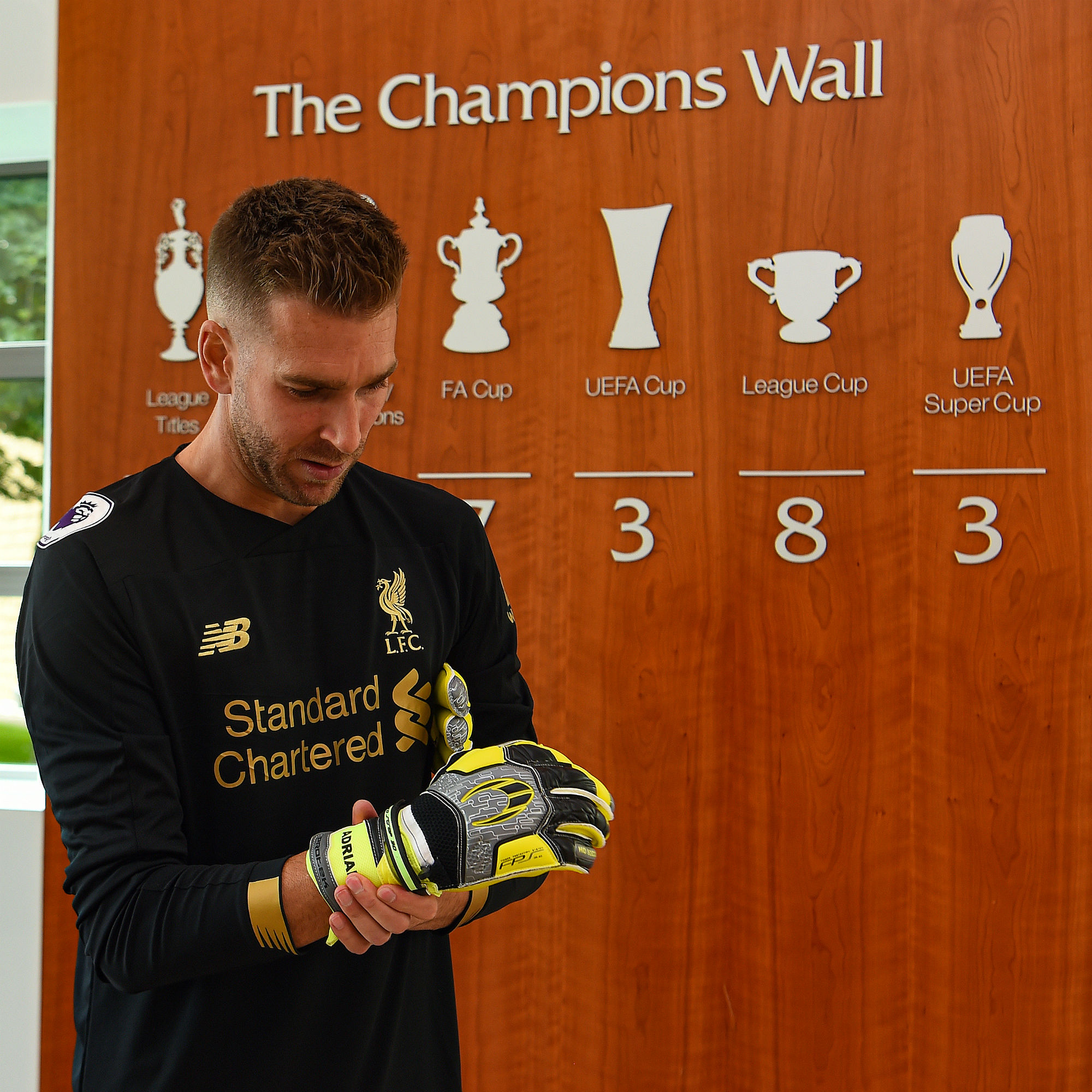 There’s a special relationship with Liverpool fans and goalkeepers. Have you allowed yourself to think what it will be like when you get that first chance at Anfield?

What are you looking to achieve over your time at Liverpool?

As I say, I’m very ambitious. I come here to try to win everything, to try to push Ali from the first minute and to make us better. Obviously I want to win titles, so I come here to fight for all the competitions. Yesterday was very unlucky at the end [with] the penalties in the Community Shield. But we have many competitions ahead, so we’re going to fight for it and try to get them.

Just finally, what would your message be to Liverpool fans watching this and greeting your arrival?

Just to tell them I’m really happy to be here with you. I’m just looking forward to playing the first game in Anfield and to win all the stuff and all the games that we can win.