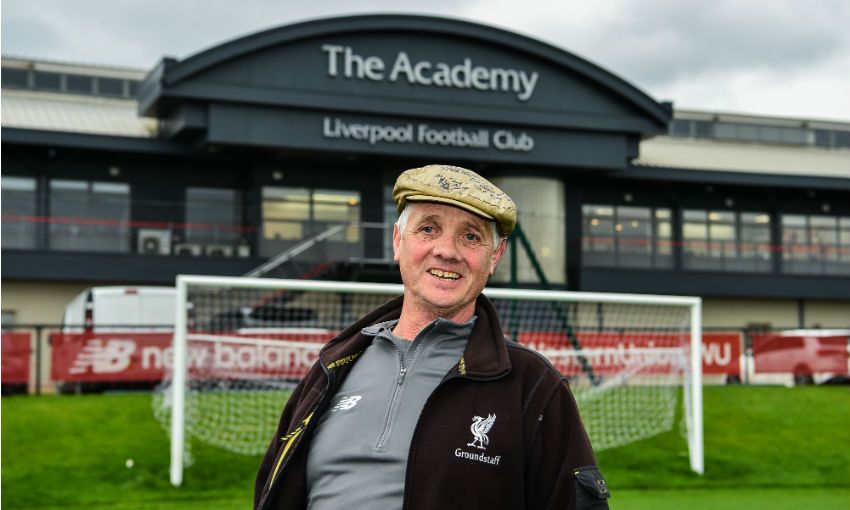 Watch: Gomez and Robbo prank Brewster on his birthday

A queue for tickets at the Anfield ticket office has been the start of many a great adventure for Liverpool supporters.

For Allan Webster, it was one that lasted almost 46 years and which only came to an end last week.

For the first 28 of those, he would be a groundsman at Anfield, looking after the sacred turf as Liverpool dominated both at home and in Europe.

So many of the finest moments in the club’s history have unfolded on a surface lovingly prepared by Allan and his colleagues.

He would go on to tend the pitches at the Reds’ training base at Melwood, where many a win was plotted, and the many surfaces and gardens at the club’s Academy in Kirkby.

He finally put away his lawnmower for the last time on Friday amid a flood of well wishes from friends and colleagues. 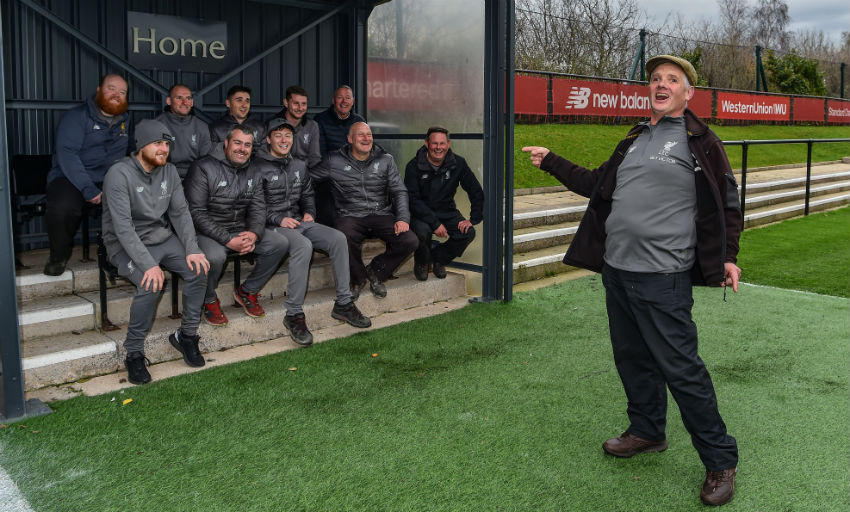 But it all started with a slice of luck in that Anfield ticket queue back in 1973.

“A job was advertised in the Liverpool Echo as a trainee groundsman at Anfield," the 64-year-old recalls to Liverpoolfc.com.

“I didn’t get it at first but the lad who got it never turned up. I was at Anfield in the queue for tickets for a big cup game and the foreman Bert Johnson picked me out and said I could have it on a month’s trial. I started the next day.

“Luckily I was still able to go to the game!”

Perhaps Allan, raised as one of eight kids in Norris Green, was always destined to work with the Reds, though. His father, Tommy, had also secured a part-time role with the club.

“He worked for the club as a steward on matchdays and at Melwood on the gate when they were training," Allan says. "I used to go to Melwood with him and watch them training.

“I remember seeing Ian St John, Roger Hunt, Ron Yeats, I spoke to a few of them. In the summer holidays we used to go up and play football in the dinner hour.”

A fan who graduated from the Boys’ Pen, for most of the next three decades, Anfield was Allan’s professional home.

“We had games on a Saturday and then Tuesday or Wednesday as the reserves were playing at Anfield too, so you’d be there seven days a week," he says.

“We had petrol lawnmowers which you followed behind. Every time you cut the pitch you’d walk six miles. We cut Anfield three times a week, but coming up to the start of the season we’d cut it every day for the last two weeks to get it to the right level and keep it that way.” 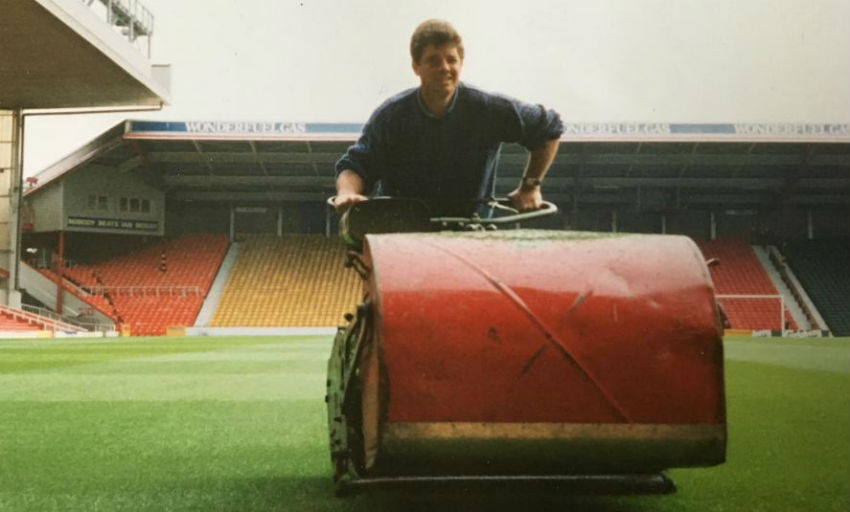 “Arthur Riley did it first and he stayed on for a few years and then I was assistant to Reg," he says. "There were only three of us and then some pensioners helping to sweep the terraces."

Anfield developed a reputation as one of the finest playing surfaces in the land, but that was not always the case.

“The pitch was pretty bad in those early days," Allan admits. "On the touchline it had a bow in it and went up and down. They’d think the ball was going out but it would stay in because of the crown in the pitch.

“There were times when you couldn’t cut it as it was too wet so we’d just use a wooden roller to put the shades on. You’d be up and down seven or eight times to get two shades.”

Allan was present for the arrival of big innovations in pitch management at Anfield - including the installation of undersoil heating and arrival of a sprinkler system.

Allan recounts: “The first time they put undersoil heating in they used a tractor and just pulled it through. The next time they took a metre off the top of the pitch and built it up from there.

“It made a big difference, especially in winter. If it’s frosted over you can’t do your job as a groundsman. With the heating on you can get to work on it and get the games on. We didn’t lose a lot of games before but we did have to call a few off.

“We used to use fire hoses to water the pitch, we never had sprinklers like they do now, we’d take it off the fire hydrants. We had six or seven pipes and you’d pull them all round the pitch.”

So, after all that work preparing the pitch, did he get to enjoy those Liverpool teams in their pomp?

“There were two seats missing in the old Main Stand. So, Reg and I had two stools and we’d watch the games from there," he says. "Then we’d be straight on the pitch at half-time to repair the divots.

“It was brilliant to watch the games, I used to love it. Before the season even kicked off we used to think, ‘Who are we going to be playing at Wembley?’ We were always down there.

“When the old standing Kop was singing during a night game it was absolutely brilliant - ‘You’ll Never Walk Alone’ moved you.

“We went to loads of finals with the club down at Wembley. I’d go with my dad and my brother-in-law. I didn’t go to the European Cup finals, though, as only the head groundsman went.”

In terms of favourite players, Allan shows a definite preference for full-backs - “Stevie Nicol was brilliant, and Phil Neal” - but one player gave him plenty of work.

“I could recognise the divots that were Steve Heighway divots," Allan chuckles. "He did so many turns on the wing, back and forward!”

Allan was there for many famous Anfield occasions, although one performance stands out for him. 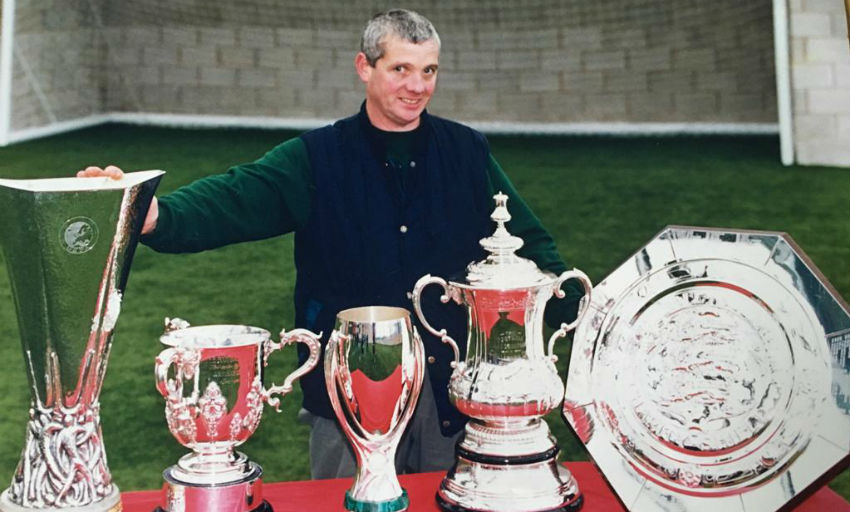 Allan witnessed 11 different managers hold the permanent job at Anfield during his time at the club.

“I was there for Shankly’s last year," he boasts. "He’d talk to anyone. ‘All right, son?’ he’d say. I remember everyone’s shock when he stepped down.

“Bob Paisley took over. Bob didn’t know my name, he didn’t know some of the players’ names! He’d just say, ‘Here’s Dougie Doins’, that was his saying [and became his own nickname].

“Paisley asked for us to get out and replace the divots at half-time. We only used to do the end Liverpool were going to kick into. That didn’t change until we got more staff.

“Joe Fagan was a very nice man and won three trophies in one season, Kenny Dalglish was always messing, a bit of a joker, you saw a different side to what was sometimes on the telly.

“Roy Evans and Ronnie Moran, both of them were brilliant. They’d always have time for you. Ronnie was strict with the players but he was always all right with us.

“Among the players, Phil Thompson and Sammy Lee were great. Sammy would stay off a pitch if you told him you’d be better staying off it. I remember Phil forking a pitch himself [when reserve-team manager] when we were trying to get a game on for Jim Beglin, who was coming back from injury. I didn’t let him stay on the pitch for long but we got the game on.”

One of the most important tasks Allan had - back when it was permitted - was for those whose last resting place was to be at Anfield.

“I buried my dad’s ashes at Anfield. I dug down and backfilled. I’ve done loads of people’s ashes," he says.

“There was an Irishman who died and they brought his ashes over. There were 10 or 11 of them. They poured a whisky out for every one of them and one for me - we all drank them and then they threw one down the hole with the ashes!

“Others wanted to spread the ashes on the exact spot where they stood on the Kop, even though I told them they’d end up getting swept up.”

In the early 2000s, Allan moved to Melwood, but he was as busy as ever.

“At Melwood there was more to do. There were three pitches compared to one," he explains. "There was a match every day, so you had to get it done for training the next day.

“If they had trained at night you’d be there late to get it knocked back and rolled and ready for training the next day.”

Allan came up to the Academy at Kirkby in 2005 and started looking after the pitches on the site. He then took over as gardener for the grounds seven years ago, with the additional perk of finally getting weekends off.

“The pitches here are good considering the amount they’re used," he notes. "I’ve enjoyed doing the gardens. There’s a good bunch of lads here and I still help out on the pitches now and again.”

In retirement he will be spending more time with his wife, Maureen, daughters, Kelly and Michelle, and four grandchildren at his home in West Derby.

But his gardening days aren’t behind him. In fact, the first thing he bought with some of his retirement presents from the club was a new lawnmower.

“I’ll be looking after my daughters’ gardens," he insists. "And I like being out in my own garden during the summer."

So how does he look back on his Liverpool FC odyssey?

Allan concludes: "I enjoyed it. We took pride in the pitch - we were made up the players did what they did and what we were doing.”

Video: TigerWit and Milner give St John a tour of Melwood