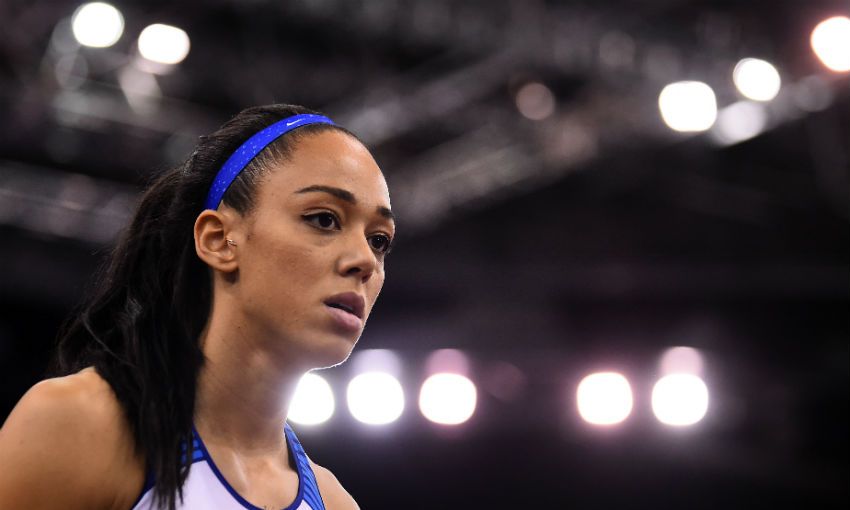 Having spent the last decade pushing herself to the limit in front of crowds of thousands with Olympic, World and European medals on the line, Katarina Johnson-Thompson already has quite enough pressure in her life.

But for the last seven months or so, there’s been another source of stress to deal with - and she freely admits that she’s struggling to cope.

“I’m just on edge,” the 26-year-old tells Liverpoolfc.com with a nervous smile. “My heart can’t take it!”

You’ve probably already guessed that we’re not talking about pentathlon or heptathlon here.

Given that the multi-talented Scouse athlete has added three golds to her growing medal collection in the last 12 months alone, that side of things is taking care of itself very nicely.

No, it is football - and Liverpool’s bid for the Premier League title, to be specific - that is giving this lifelong Red palpitations.

“There was a point in the season, I think it was around about Christmas, when I got to attend the Arsenal game [a 5-1 Liverpool win at Anfield] and I really enjoyed it, but now I’m just on edge - every corner, every kick.

“That’s sport, I guess, that’s why we all love it, it’s unpredictable. It’s just one of those things, you never know what’s going to happen and you’ve just got to back your team.”

That tension is rendered particularly acute for Johnson-Thompson by distance, and the fact that she spends most of the year approximately 750 miles away from Anfield at her training base.

Montpellier, on France’s Mediterranean coast, is not known for its preponderance of LFC supporters’ clubs, but where there’s a will, there’s a way.

“So that’s where I watched the Champions League final and most of the World Cup. If I’m not too tired after training I’ll wander down by myself - there’s usually some English people in there and that’s where I’ll watch games.

“Adam Gemili, the sprinter, is a big Liverpool fan, and so is my boyfriend [reigning World and European Indoor champion in the 60m hurdles] Andrew Pozzi. So there’s a couple on the team and it’s good to watch matches together when we go away on camps and stuff.”

If there is a parallel to be drawn between multi-eventing and supporting Liverpool this season, then perhaps it is that sense of having to keep an eye on a close rival’s results.

But, from a professional perspective, focusing purely on your own performance is key to success, in Katarina’s opinion.

“It’s hard to do that. Obviously sometimes you can’t help yourself, but you shouldn’t,” she elaborates.

“I can only talk about what I do in sport, but for me, I wasn’t doing the best that I could be doing when I was looking at other people. I was sitting in the high-jump field going, ‘Oh, God, they’ve just scored high, they’ve just got a personal best, I’m going to have to do this or that.’

“It’s like an inner monologue that you don’t want when you’re just trying to be there and be in the moment and perform. Where I’ve done well last year and this year is just concentrating on my own performance and not really worrying about anyone else, because I know that if I do the best job I can do I don’t even need to bother about anybody else.”

On those occasions when she does manage to make it to back to Merseyside, Katarina can often be found at Anfield in her capacity as patron of Box4Kids, the charity initiative run by the Barrie Wells Trust that gives seriously ill children VIP treatment at sporting events.

When discussing which players she most enjoys watching, it is perhaps no surprise that the Woolton native mentions a fellow Scouser.

From the West Derby area of the city, Trent Alexander-Arnold has made a swift transformation from Liverpool fan to Liverpool player - and that gives Johnson-Thompson a feeling of affinity with him, given that she competed at the 2012 London Olympics aged just 19.

“I can relate to someone like Trent, because when I went to the 2012 Olympics I was sort of like a fan and an athlete simultaneously,” she reflects.

“So I can definitely relate to him, but I can’t imagine what it’s like being a Liverpool supporter my entire life and then being on the pitch playing for them - I don’t know how I’d do it! I love Sadio Mane as well, and I love Mohamed Salah.” 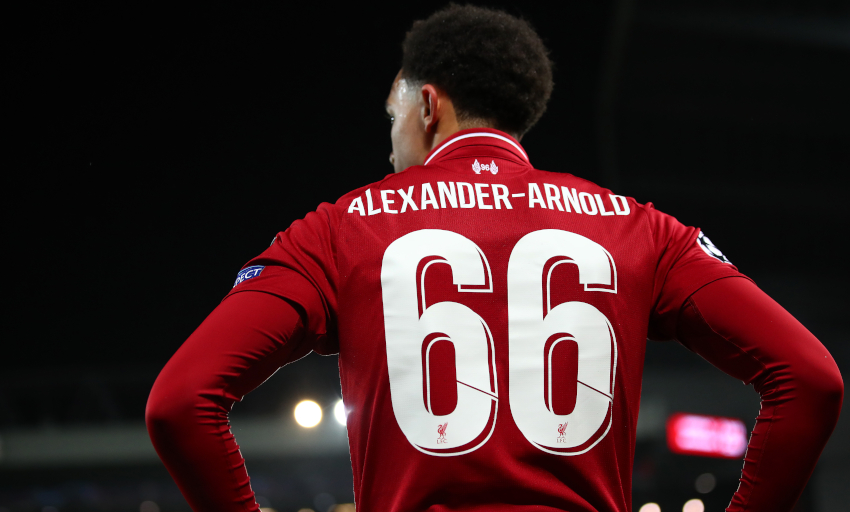 As someone who uprooted her life to Montpellier in order to benefit from the tutelage of former multi-eventer Bertrand Valcin, Katarina certainly appreciates the value of good coaching - and she has nothing but admiration for Jürgen Klopp’s work at Anfield.

“That’s what I watch most of the time during games, Jürgen’s reactions. I absolutely adore him and he’s great for the club,” she says.

“I think he would be a great leader if he was in athletics. Everyone would just be walking around with a huge smile and that does a lot, because if you’re enjoying it, better performances come.”

Katarina’s love of LFC was instilled in her at an early age by her grandfather, and as she grew older it came to be focused around one player and one night in particular.

“My grandad, who has unfortunately died now, was a massive Liverpool fan and he’s the reason I’m such a huge supporter,” she explains.

“He would even go as far as teaching me to crawl underneath the TV when I was little, because if I passed in front of it when the football was on he’d complain that he couldn’t see the game!

“It’s easy to say Istanbul, but that’s my favourite Liverpool moment because of how me and my family watched it. I would have been 12 at the time. I used to watch all the matches with my grandad, and Istanbul was great for that, because I remember at 3-0 down he was lying back, then when the first goal went in he came up onto his elbow, by the second goal he was sitting up, and by the third goal he was screaming at the TV.” 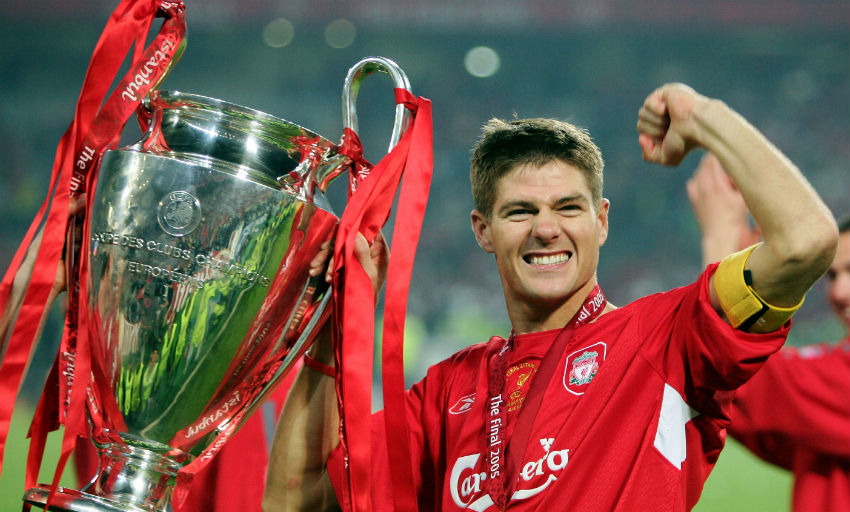 Long before her athletic gifts came to light, Katarina much preferred kicking a ball about with her mates and pretending to her childhood hero.

“The very first time I went to a football match was Liverpool v Middlesbrough, and it finished a draw [1-1 at Anfield in April 2005], but Steven Gerrard scored this amazing goal,” she remembers.

“I just remember that it was the first time I’d seen something like that in real life, and I was like: ‘Wow.’ I was never into athletics growing up, I was always just a football fan, running around with the boys playing football and Steven was one of my absolute idols.

“I met him for the first time in 2012, after the Olympics, and I was shaking, it was crazy. He was in one of the hospitality boxes and I was introduced to him. It was unbelievable.”

Where her career is concerned, 2018 was a stellar year for Katarina, one that saw her top the podium at both the World Indoor Athletics Championships in Birmingham and the Commonwealth Games on Australia’s Gold Coast.

This year has started in similar fashion with another gold at the European Indoor Championships held in Glasgow earlier this month, and she’s determined to maintain that positive momentum with the outdoor World Championships and the 2020 Tokyo Olympics on the horizon over the next 18 months.

What a magical day! 😮 First in the European champs 🥇and got to enjoy the moment with all my friends and family ❤️😭 Thanks so much for all your messages and support!!!!

“I’ve never won an outdoor World Championship medal before so that’s my first aim, in October in Qatar. Other than that, just stay injury-free and keep enjoying it. I think I’ve found my groove now so I just want to try and stick with that.”

Before then of course, there’s the matter of finding out how the Premier League title race concludes - if her nerves can bear it.

So what is Katarina’s gut instinct on how the Reds will fare?

“It’s going to be hard, obviously, but I think we can do it,” she smiles. “My heart can’t take it, but I think we’ll be able to do it - in classic Liverpool style.”