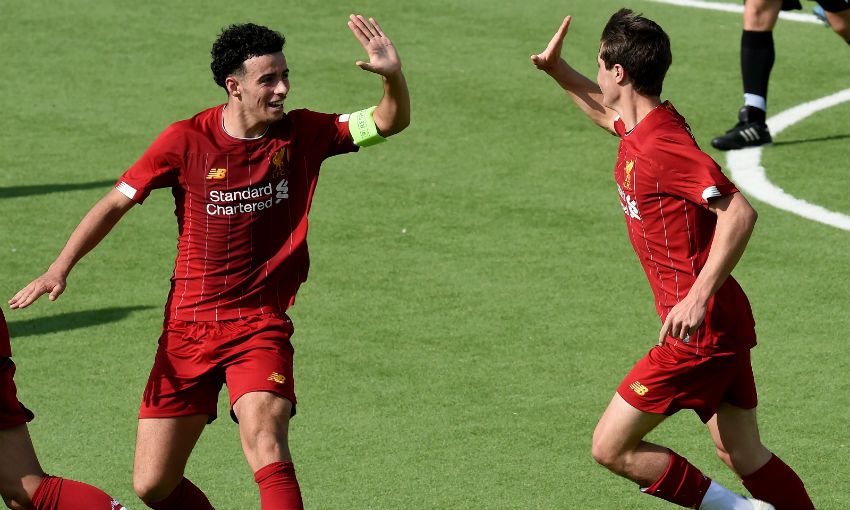 The young Reds, who fell behind to Andrea Mancino’s goal just before the half-hour point, dominated the second half of the Group E fixture at a sweltering Stadio Pasquale Ianniello and had hit the woodwork twice prior to Stewart’s late intervention.

Neco Williams struck the crossbar with a header not long before Mancino’s opener, and Leighton Clarkson blasted against the post as Barry Lewtas’ team streamed forward in search of a leveller after the break.

And it was substitute Stewart who finally provided the elusive goal on the occasion of his European debut for Liverpool, the 17-year-old sliding in a fine improvised finish at the back post after good work from Harvey Elliott. 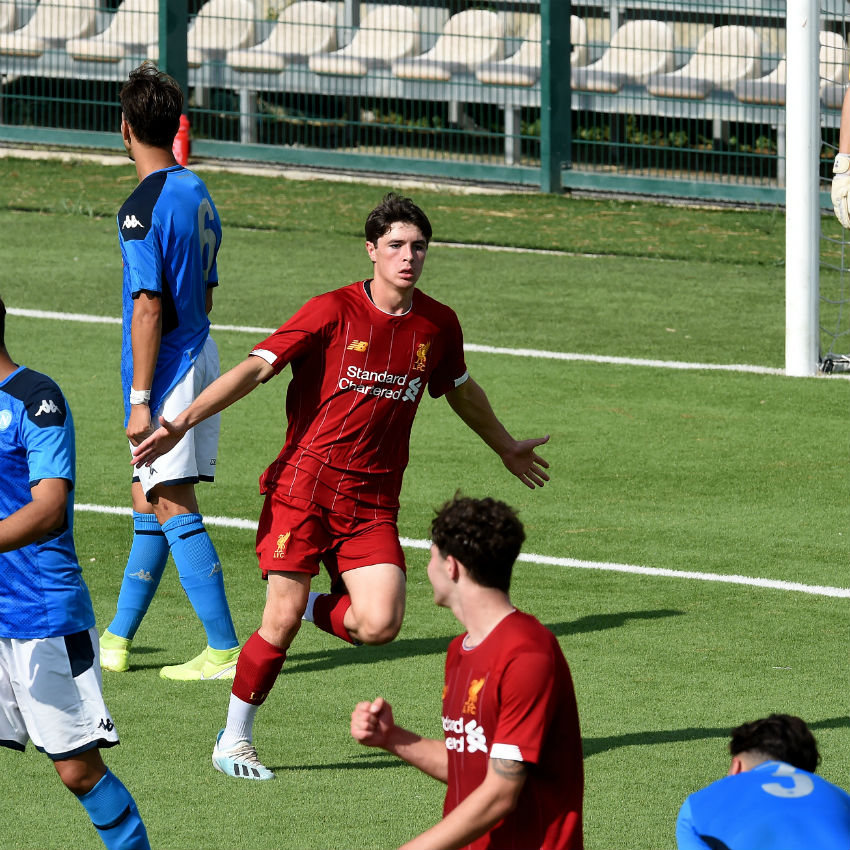 A bright start by the visitors brought about the game’s first attempt on goal with six minutes on the clock, when Curtis Jones fired over after collecting Clarkson’s pass just inside the penalty area.

Ki-Jana Hoever was, however, required to divert a goal-bound shot by Gianluca Gaetano wide soon after.

Napoli’s captain found space in the box and was picked out by Agapios Vrikkis, only for Hoever to read the danger and clear his attempt with Ben Winterbottom beaten.

An unlikely source then very nearly put the young Reds ahead, Williams hitting the bar with a header from Yasser Larouci’s clipped cross, but Napoli would go on to take the lead in the 29th minute.

Vincenzo Potenza ran free down the left wing before pulling back to Mancino, who swept a first-time finish into the bottom corner.

The hosts were buoyed by that goal and were close to doubling their advantage in the closing stages of the half, with Gaetano’s curler going narrowly past the post. 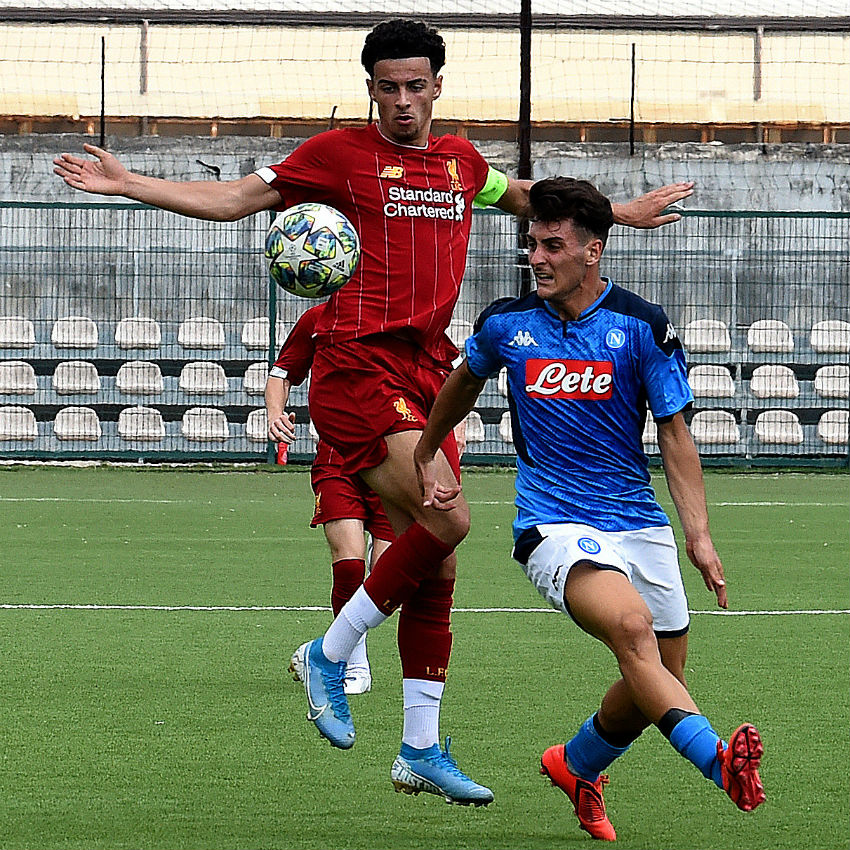 Liverpool were unfortunate to get no reward for a positive opening 15 minutes of the second half that yielded three goalscoring opportunities.

First, Elliott cleared the crossbar from close range after Jones had unselfishly squared to the 16-year-old, before Clarkson rattled the outside of the post with a powerful drive from a tight angle after playing a neat one-two with Jake Cain.

And Jones was next to go close, the young Reds’ captain shooting over following sharp interplay with Cain on the edge of the area.

A knock sustained in a tackle then forced Larouci off, leading to James Norris’ introduction. That change did nothing to alter the pattern of the match, though, as Lewtas’ side continued pressing forward. 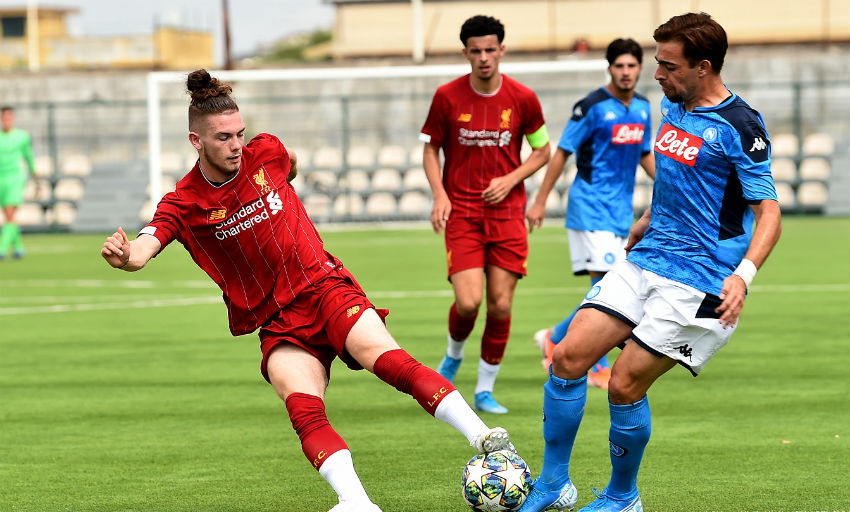 Clarkson and Jones again linked up superbly to get the skipper to the byline, but his cut-back was scrambled clear as Cain waited to pounce, and another Williams header at the back post was blocked.

Stewart, on in place of Elijah Dixon-Bonner, shot just wide from Elliott’s knockdown as the clock ticked over the 80-minute mark, though the substitute’s moment would arrive soon after.

Elliott sent a clever low ball across the area following another sustained spell of pressure, with Stewart showing excellent anticipation to prod past Hubert Dawid Idasiak and claim a fully-merited point for his side.