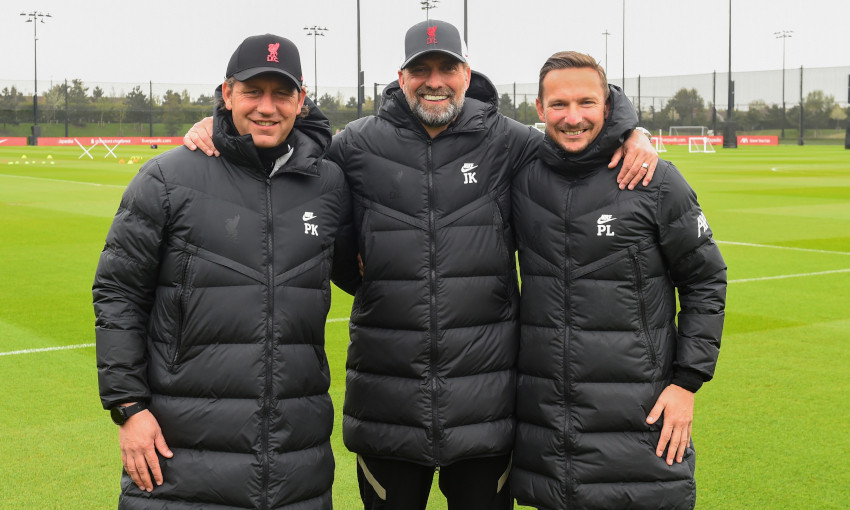 Inside Anfield: Tunnel footage from Liverpool's UCL win over Villarreal

The assistant managers have mirrored the boss’ commitment to the Reds’ project by also putting pen to paper on deals, ensuring long-term continuity beyond the conclusion of 2021-22.

Krawietz followed Klopp to Anfield in October 2015 having worked alongside him at FSV Mainz 05 and Borussia Dortmund.

Meanwhile, Lijnders was initially appointed as U16s coach at Liverpool’s Academy, joining from FC Porto in 2014 before progressing into the first-team set-up. He briefly left the club to take charge of NEC Nijmegen in his native Netherlands before returning in the role of joint-assistant manager in the summer of 2018.

Klopp told Liverpoolfc.com: “To have Pep and Pete join me in signing new deals and therefore making sure we’d continue to work together was incredibly important to me in making my decision to sign my own contract.

“I’ve said there were a number of things that made my decision an easy one – and Pep and Pete signing was one of them. A massive one, in fact.

“It is important they remain here to continue the continuity of our project together. What they bring to Liverpool FC is invaluable.

“Of course, as manager many will see me as ‘the face’ of this club and I can understand that, but Pep and Pete’s influence on our success and story together should not – and should never be – undervalued.

“My story with Pete goes back many years now to our time together at FSV Mainz and Borussia Dortmund and I’m so happy it will continue for a few more years.

“What this guy sees on a football pitch is remarkable, really. I don’t know how he does it, but it’s a talent and one that Liverpool FC are better for having.

“I have watched Pete develop as a coach over our years together and since we both came to Liverpool, I have really seen his influence and talent grow and grow. He is an outstanding and priceless coach.

“As for Pep, wow. I have been lucky enough to meet many, many people in football during my time in the game and I don’t think I have ever met anyone with the energy and enthusiasm he has for this game.

“I think I have said in the past, there is nothing he does not know about this sport. His passion for it is remarkable and his enthusiasm in training each day is infectious. Since he came back to us in 2018, it has been a privilege to watch him grow and, for sure, he has a long and successful career ahead of him in football.

“I have said before I am the luckiest guy in the world to work with my players each day – and the same can be said of my staff. Not just Pep and Pete, but all the people at the AXA Training Centre who each day make such a big commitment to trying to make us the best we can possibly be.

“What you see on the pitch from the boys comes from the collective effort that’s made each and every day here. We all share the same passion: to make Liverpool FC the best team and club in the world and that’s really cool.

“As I have said, I am nothing without my staff and what each member of the club brings to this project is what makes us what you see today.

“This news today is exciting for us all and I am so happy that I will have Pep and Pete alongside me to continue our incredible story together.”