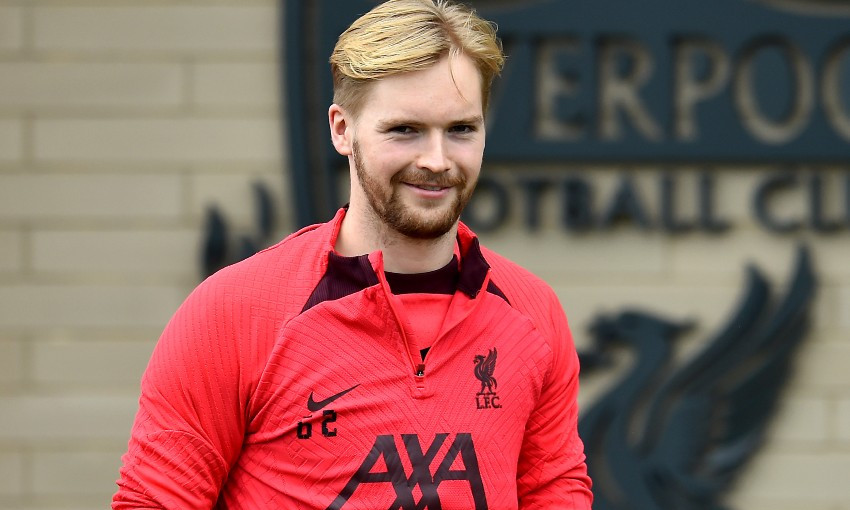 The Republic of Ireland goalkeeper was, of course, instrumental in last season’s victory in the competition and starred in the penalty shootout win over Chelsea in the final.

And Pepijn Lijnders has confirmed Kelleher will make his first senior appearance of 2022-23 versus the Rams at Anfield.

“Yeah, Caoimh deserves it. If you shoot the last penalty in [in the final], it would be a disgrace if we took him out now!” the assistant manager told Liverpoolfc.com on Tuesday afternoon.

“I think, honestly, one of my proudest moments in football was after the game when we won this cup. Caoimh, if you see a talent grow and you see talents turn into men and if you see men with personality and braveness and you go into a final and he takes the last penalty… and after the game we have this moment together, it means a lot. So, if nothing happens today he will start for us.”

When asked about Liverpool’s wider selection plans, Lijnders mentioned the necessity of ‘freshness’ and indicated Jürgen Klopp will stick with his policy of making line-up changes in the Carabao Cup.

“It’s probably the only one that represents so much the Academy, our system, our structure, all the people around who have to make sure that each player is ready for these kind of games.

“If something has been proven over the last years, it’s that we need the whole squad if you want to be successful and that’s why we brought young players in, like Calvin, like Fabio, and we always try to mix these games with a lot of experience with talent and you will see a team tomorrow, for sure, who is really hungry to show what we are all about. To put our game in place, to fight against a Derby who deserves full respect.

“It is not an easy situation for them so for sure for them it is a big honour to come to Anfield to play against us. They have changed coach [and have] a few really good talents like Sibley and Dobbin, a real target player with Collins, and even Mendez-Laing who can counter-attack.

“He normally plays always with a five, we don’t know if he will [on Wednesday] because he is missing a few centre-halves, but one thing the coach Paul [Warne] showed over the last years is that at Rotherham for sure, the players run through brick walls for him. We know what we can expect.”

Lijnders continued: “It’s good to say now that everybody who knows us now over the last years knows how we deal with this competition.

“The reason why we change is always that we want freshness and we want talent and we believe that to win the game tomorrow, we always want to put a team out who has to prove, who wants to show, who wants to bring us further in this cup.

“It’s a big opportunity and if you take it back to the first game last year, Conor Bradley on the right side was insane against Norwich! Kaide Gordon and even at Preston we played Harvey Blair, who was only an U18 player.

“[For those] who are not playing as much at this moment, despite [the fact] a lot have played a lot of football as well, it’s a great moment to shine and to show their identity.”