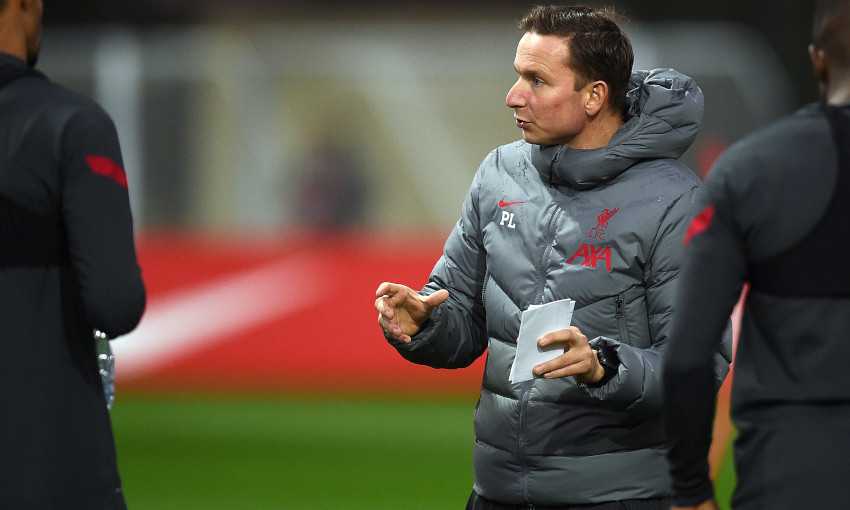 Pepijn Lijnders has detailed how Liverpool have utilised the break between matches to hone some tactical blueprints and give a dozen Academy youngsters vital exposure of training with several members of the first team.

Twelve players from the club’s youth ranks selected by Vitor Matos and Alex Inglethorpe have joined sessions with a handful of senior stars at the AXA Training Centre over the last few days.

The idea is to give the starlets first-hand insight into what it takes to operate at elite level alongside their much more experienced colleagues.

And explaining the thinking behind the decision, Lijnders outlined to Liverpoolfc.com: “We use the time to give a proper impulse to our Academy process. The best clubs in world football have something in common: a one-club mentality. Being split, you have nothing.

“That’s why it is so important for this club to be together. Vitor [Matos] and Alex [Inglethorpe] selected 12 of our finest talents to train with us. We know from experience that you need to accelerate this process from an early age, being with us from a young age, creating hope, creating belief in the talent and letting them absorb our way, our playing ideas. You can do a lot in youth, the biggest development happens when the manager shows faith, and that’s what we are doing.

“We feel this responsibility, I feel it with all I have. That is something that never will leave my identity, bringing through young players with fire in their veins. It can be a proper advantage, but you need patience and belief, these are the two key words in youth development.

“Everyone knows we believe in bringing and utilising the power of the youth. Jürgen and myself, we care so much about our talent, the inside pathway. It’s a special situation for such a club to create this week, so many talents together with Millie, Fabinho, Ox, Naby and Shaq.

“Talent needs models, they need examples much more than criticism. It’s great to see when talent and experience come together. The carrot is mightier than the stick, they say! They need to see our high values, our humbleness at the training ground.

“At the same time, we try to implement some new ideas and tactical dynamics for our core senior group we thought about for a long time. Not complex, simple new solutions.”

The work will culminate in an internal game being played at the AXA Training Centre on Saturday afternoon, when those who’ve participated in the sessions will line up against each other in an 11 v 11 match.

“We play this internal game for a few different reasons: first to keep rhythm, second to create challenges tactically,” continued Lijnders. “This whole week was to stimulate the competitiveness and improve our game quality.

“We train as though it’s a game - and you can only understand our training when you understand our style. All exercises were constructed with the idea ‘the better you play, the more you play’, and like that the more you are close to winning football games.

“We believe that you only become better when your whole body is in training: the lungs, the heart, the head. Everything… everyone thinking the same, competing to earn the right to play more, earning the right to attack more by chasing the opposition from all directions.

“As a staff we are continuously working on this, that’s why we call it ‘organised chaos’. Organised, what happens around this moment in positioning, is decisive to keep it up for long periods. It’s a ‘we want the ball’ mentality.

“At one moment this week, we had Millie, Naby, Shaq, Ox and Fab competing against seven young guns. Five seniors versus seven talents in a big space where we had to defend the midfield line instead of our goal. That’s what I mean by creating tactical challenges.

“They won the tournament, by the way: the level of concentration between them was incredible. Great things happen when capability accepts it’s a team sport. And that’s what these young players need to see, feel and hear.” 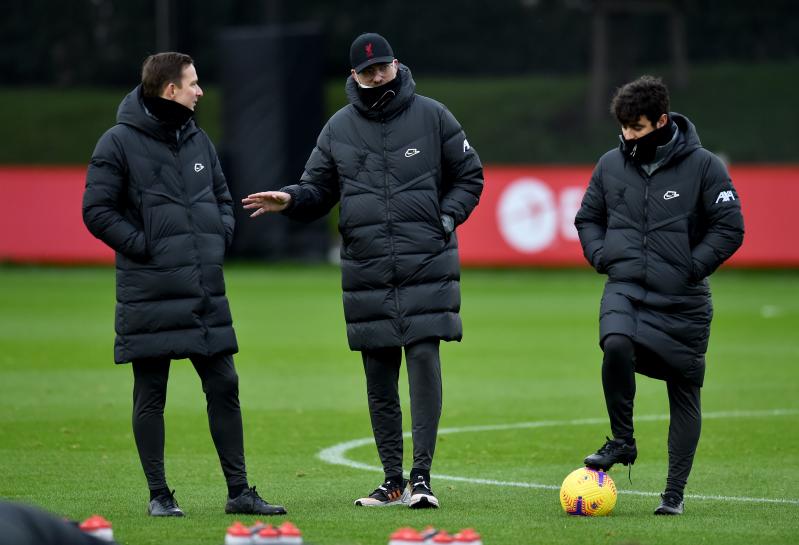 Due to the FA Cup and international fixture calendars, Liverpool are not scheduled to return to action until Saturday April 3 when they travel to London to take on Arsenal in the Premier League.

It will represent a gap of almost three weeks from their last fixture, Monday’s 1-0 win at Wolverhampton Wanderers.

However, Lijnders doesn’t view it as a ‘break’ for the Reds due to several senior players’ international commitments.

“There is no real break because the boys who are on international duty will again play three games, so my respect for Gini, Sadio, Mo, Robbo, Hendo, Roberto and the rest of the guys couldn’t be bigger,” he said. “A whole nation, the whole club fanbase, always counting on their performances.

“And we all know this level is not just playing the game, it's preparation that counts, and with so many games this is just non-stop. Big, big respect: they are constantly prepared to sacrifice a lot.

“It’s an honour to coach and work with them.”

When Liverpool return to the field, a mouth-watering Champions League quarter-final tie with Real Madrid awaits, with the away leg scheduled immediately after the trip to Arsenal.

“You hope for draws like this,” Lijnders reflected. “Two clubs with big Champions League history coming together in the quarter-final.

“Real Madrid have a lot of world-class players and lots of experience at the same time; a coach, for example, who won it three times in a row.

“We will need to use our hearts and our heads to go through this challenge.”