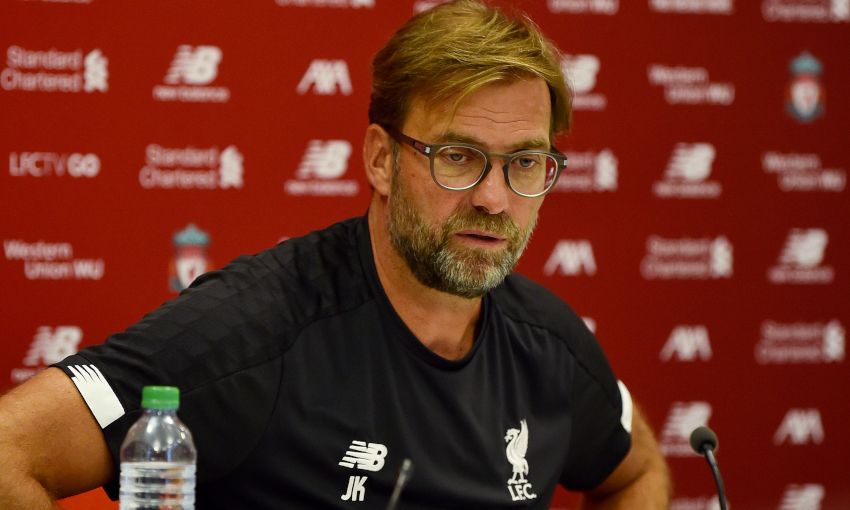 Jürgen Klopp will tell his players to be 'the team nobody wants to play against' ahead of the season kick-off against Norwich City on Friday night.

The champions of Europe begin their competitive campaign against the Canaries at Anfield as the 2019-20 Premier League gets under way.

Klopp wants his side to hit the ground running by showing the intensity that made the Reds such difficult opponents en route to 97 points and the European Cup last term.

Asked at his pre-match press conference if Liverpool’s status as Champions League winners makes them a target, the manager said: “Maybe it’s like this but that’s what we have to be ready for.

“I already thought last year or since I was in, when Liverpool is coming or somebody is showing up at Anfield, it always looks like a very special game. Can it be even more special? I don’t know in the moment but we have to be ready for that.

“What’s very important, even as a team who won the Champions League last year, [is that] we have to stay the team who nobody wants to play against – not because of the name or the quality we have, but because of the intensity we put into the game. That’s what I will ask the boys for and what we have to show tomorrow night for the first time this season.”

Sadio Mane is in contention for the clash with Norwich after returning to Melwood on Monday, while James Milner has recovered from a minor muscle issue.

With no fresh injuries to consider either, Klopp has plenty of options to choose from when he comes to select his 18-man squad for the opening game.

“We have a lot of options, I could have a lot of different line-ups. No player gave me any reason to leave him out,” said the German.

“Hopefully nothing happens today or tomorrow morning, so we have to make a decision about the squad already, which is always a really hard one for the players. If you have a full pre-season in your legs and you performed well, then when it’s the first important day – not the only one and not the last one – and you are not involved, that’s hard. But that’s how life is for professional football players.

“Line-up-wise, I have to make a decision as well of course. But I don’t think we can line up a team which never played together before; yes, if Ox starts, I don’t think Ox started a game together with Ali. That would be completely new. But apart from that, that’s the decision I have to make.

“The last game was good, I think as good as possible for the moment when we played it against City, especially the second half. Everybody knows that was really OK, now let’s build on that.”

The Reds will play at Anfield for the first time since May 12 and Klopp expects the atmosphere to reflect the mutual anticipation for a reunion.

“I think the atmosphere will be good because it’s a while ago we played at Anfield and now our crowd is waiting for us,” added the boss.

“We’re waiting for our fans, so maybe the first welcome will be even a little bit louder, a bit more emotional with You’ll Never Walk Alone maybe.

“But then with the first whistle we have to be in the season and in the game, all of us. Just be on your toes, like in the best game. For a football team maybe you need a couple of games to be at 100 per cent. But I’m a supporter as well and as a supporter I don’t need that. The season starts, be at 100 per cent and create an Anfield atmosphere which only Anfield can create. That would be really helpful. Don’t think about the name of the opponent, the competition or whatever, just be in that game and celebrate it with performance.

“I think we will be ready for that, it’s long ago we were together so now we should show we are ready to go again.”