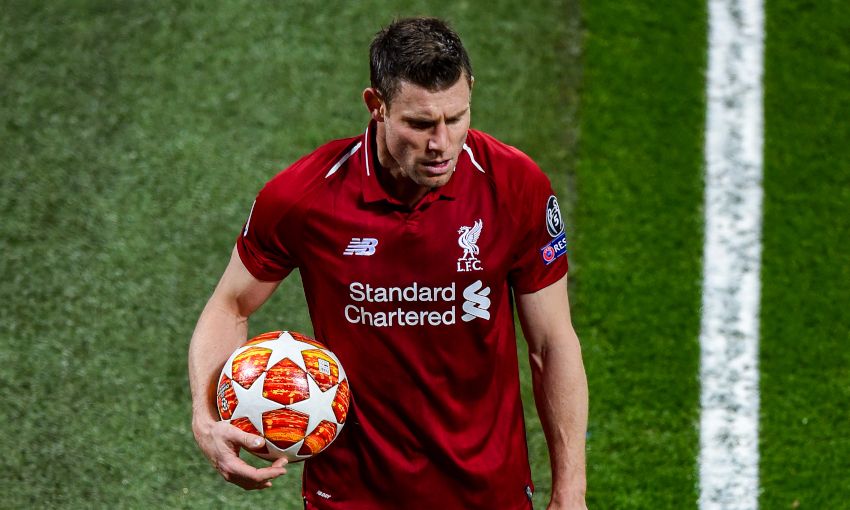 James Milner distilled the opportunities ahead of Liverpool into a single, simple message: 'Let's try to win seven more matches.'

A 4-1 success over FC Porto on Wednesday night extended the Reds’ ongoing run of victories to eight and, more pertinently, ensured a spot in the Champions League semi-finals and a meeting with FC Barcelona.

A maximum of seven games now stand between Jürgen Klopp’s team and the Premier League and European silverware they crave, with a trip to Cardiff City next up this weekend.

With that in mind, Milner argued Liverpool can block out the fortunes of their trophy rivals and focus purely on continuing to win every fixture of their own.

“The league is in [City’s] hands and all we can do is try to win our games and put as much pressure on them as possible,” the vice-captain told Liverpoolfc.com at Estadio do Dragao.

“I think the maximum number of games we can play now is seven and if we can win all seven then we will have at least one trophy, so I suppose that’s the aim.

“It’s going to be very tough, a lot of games in quick succession and a lot of pressure in each game, and it will take it out of the squad but I think we’ve dealt with it very well up to now at this point.

“We’ve got a good squad of players but also mentally we are very together and just focusing on the next game, so that’s what we need to do now, recover from this because it was a tough shift in the game and there’s a few tired legs in there, so recover and go again.”

Watch: Highlights from the 4-1 win in Porto

The attacking trio have racked up 152 goals between them last season and this, to become one of the most feared combinations in Europe.

“The beauty with the front three is if one of them has a bad game, the other two are there,” said Milner.

“And the chances that are being created from the boys behind, they are coming from all over and it was a great ball in from Hendo [for Firmino’s header], Trent put a nice pass through for Mo and that’s important.

“When you’ve got these three up front who are clinical and score all types of goals, you need a good supply to them as well.

“We have Virgil popping up with the odd goal or two now as well and probably scoring as many as he should do, so that’s pleasing and something which obviously makes us an even stronger team because if you are playing against us you are going to analyse and try to stop us, so if it’s coming from different avenues it is very difficult to stop.”

In the Champions League, that task next falls to Barcelona.

After a first leg at Camp Nou on May 1, the Reds will host the La Liga giants – including Philippe Coutinho and Luis Suarez – in the return match at Anfield six days later for the right to contest the final.

Milner’s conviction that Liverpool can defeat the collective talents of Lionel Messi and co is founded on the know-how Klopp’s charges have compiled from their two previous lengthy European adventures.

Asked if Barcelona can be beaten, the midfielder replied: “Of course, yes.

“It’s going to be very tough, I’ve been there [against them] a couple of times in the knockout stages and not got the right results before, so hopefully third time lucky for me.

“They are a strong team, we know that. They’ve got some fantastic individual players as well and we’ll have to try to stop that and try to play the way we do, but they won’t have played against too many teams who play in the style that we play. So I’m sure it will be a good game and it will be very, very tough.

“They are a very good team but I think the experience we’ve gained in the last few years in the Champions League, last year getting to the final obviously, the Europa League final as well, I think you can see it in this year’s run and the games when it hasn’t been going well for us or tough nights, we’ve got that experience, that calmness about us, we’ve been there before and we know how to get the right result.”