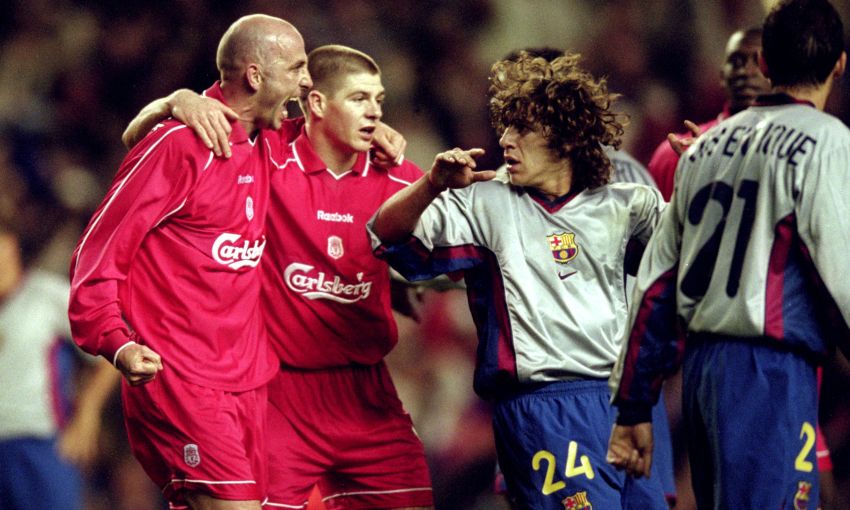 Liverpool and FC Barcelona's successes this week over FC Porto and Manchester United respectively confirmed the two will meet in the semi-finals of this season's Champions League.

With 10 European Cup triumphs and 16 final appearances between them, the Reds and the Blaugrana are two of the biggest names in the tournament’s history.

Their forthcoming meetings on May 1 and May 7 will be the latest instalments in a rivalry dating back 43 years and spanning eight official fixtures.

And it’s a history that provides plenty of encouragement for Liverpool, as far as results are concerned…

One of the true landmarks in their evolution into a continental superpower, Liverpool’s first encounter with Barcelona came on an ill-tempered night at Camp Nou in the spring of 1976.

Bob Paisley’s first European campaign as Reds manager had ended with second-round elimination from the Cup Winners’ Cup at the hands of Ferencvaros, but the following season his team stormed past Hibernian, Real Sociedad, Slask Wroclaw and Dynamo Dresden to reach the semi-finals of the UEFA Cup. Lying in wait was a Barcelona side coached by Hennes Weisweiler but whose true leader was the magisterial Johan Cruyff. 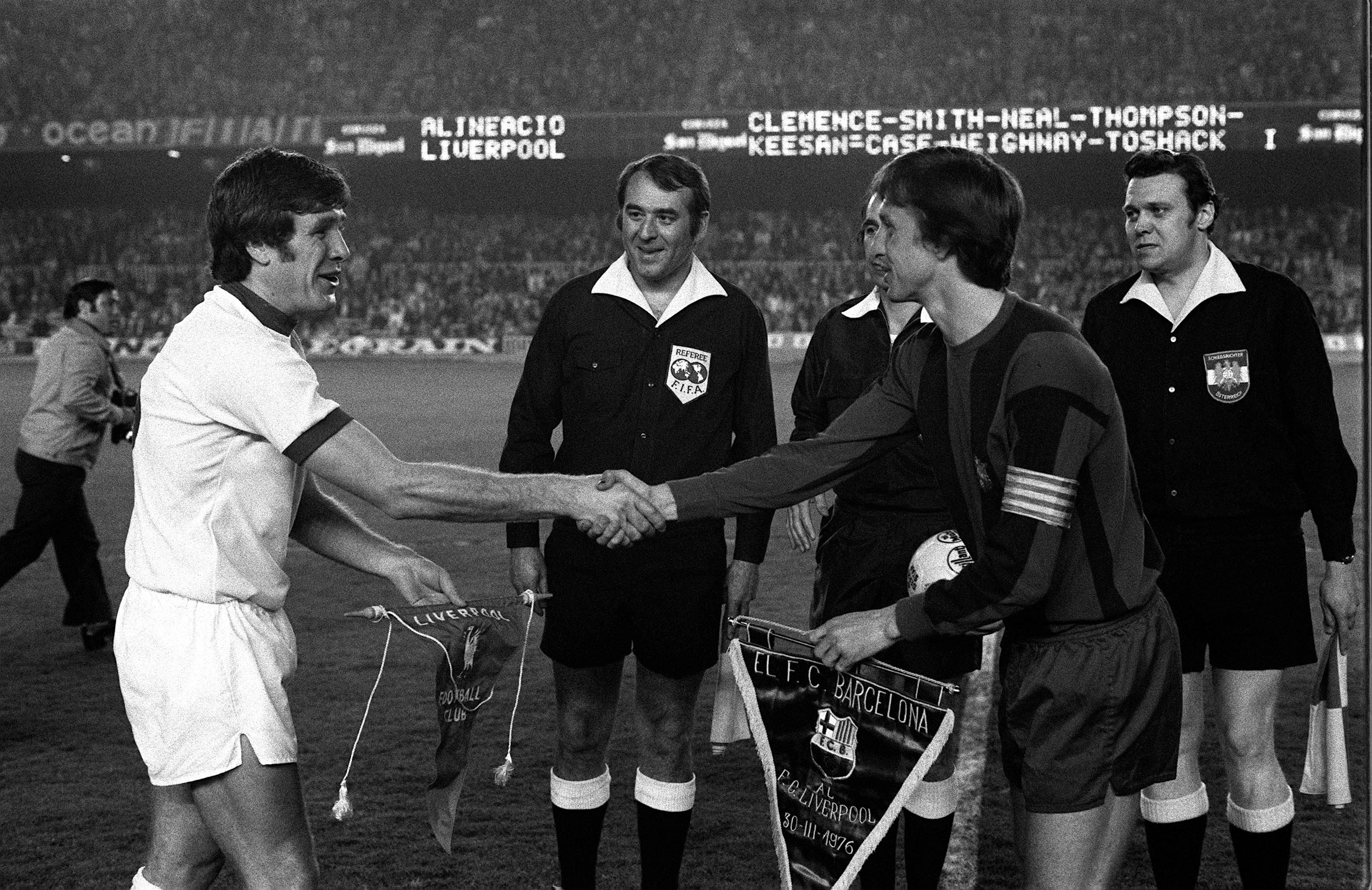 The first leg saw Paisley boldly change tact and play Kevin Keegan as an out-and-out striker and not an attacking midfielder, as was standard practice in European competition, and the gambit paid off in the 13th minute when John Toshack flicked a long ball on to Keegan, collected the return pass and buried a finish in the bottom corner.

Barcelona were unable to summon up a meaningful reply, leading to a famous comic moment when the frustrated home fans threw cushions onto the pitch and Welsh defender Joey Jones began to throw them back, only to be reprimanded by Paisley.

“We thought Barcelona were a bit suspect at the back, so we decided to have a dip at them,” was the tactician’s typically understated analysis.

“Let’s face it, Liverpool must get through now,” lamented Cruyff, and so it proved, although the second leg at Anfield wasn’t all plain sailing, Barca’s Carles Rexach immediately replying to Phil Thompson’s strike early in the second half to leave the outcome in doubt right up until the end.

The significance of that triumph was clear to see as time moved on, Paisley’s Reds defeating Club Brugge 4-3 on aggregate in the final to secure the first of three successive major European trophies in as many seasons.

A quarter of a century would pass before the next collision, at the exact same stage of the same competition.

2000-01 was, of course, the season when Gerard Houllier’s Reds did the treble, and the 1-0 aggregate victory they recorded over Llorenc Serra Ferrer’s Barcelona in the last four of the UEFA Cup was right up there with the most impressive achievements of the campaign.

The Barca XI selected for the first leg at Camp Nou not only featured some of football’s biggest stars from that era, just after the turn of the millennium, but is a who’s who of prominent thinkers in the game nowadays – from Spanish national team boss Luis Enrique to Manchester City manager Pep Guardiola and Ajax director of football Marc Overmars, not to mention Patrick Kluivert and Rivaldo.

Yet all of that attacking talent was neutralised by a masterful defensive display from Sami Hyypia, Jamie Carragher and co in a goalless first leg where the hosts were limited to half-chances for Kluivert and a 21-year-old Xavi Hernandez. 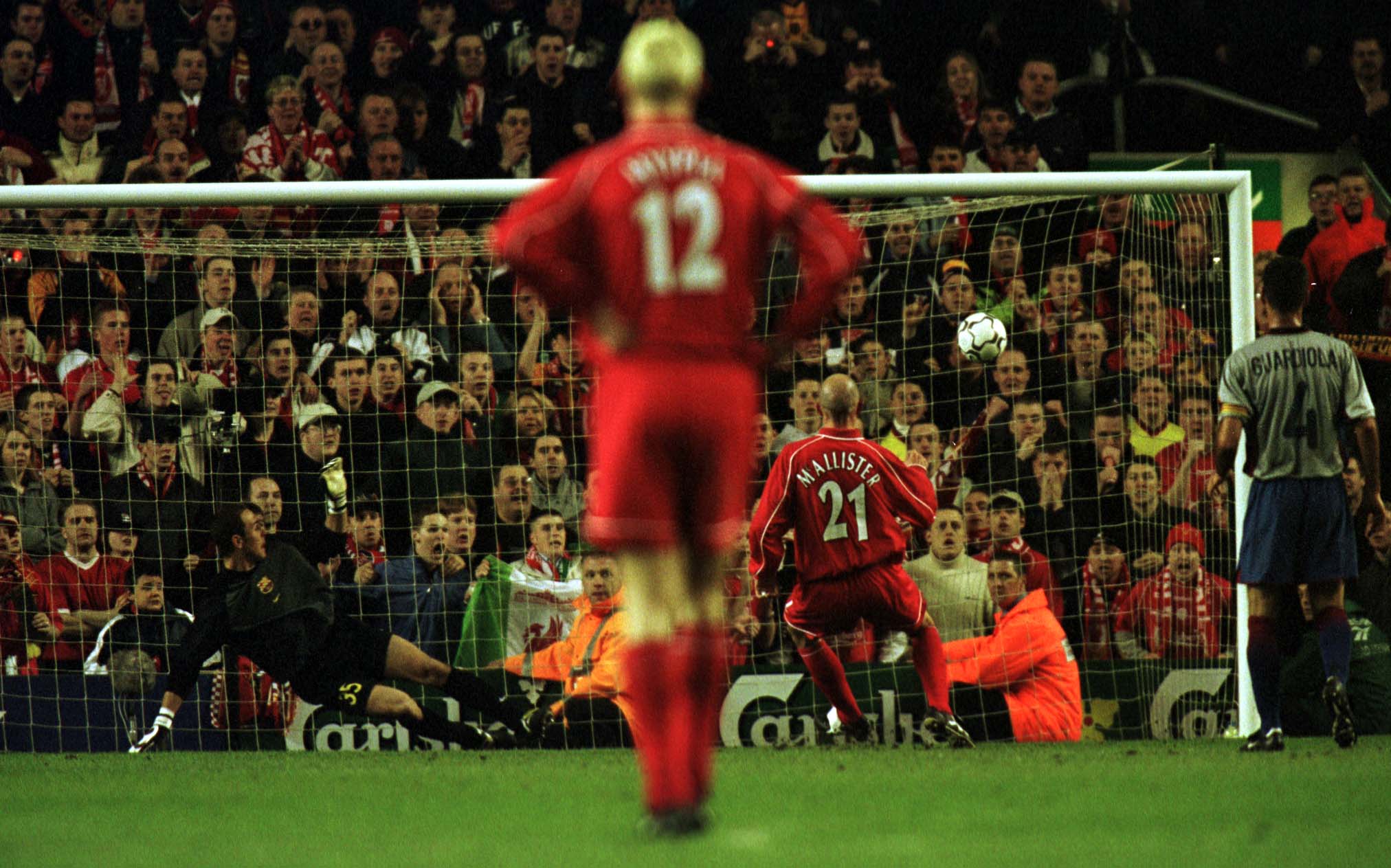 The return was similarly cagey, decided a minute before half-time with a goal scored by Liverpool’s talisman that season. The lyrics ‘your Barca pen’ are still blasted out in city squares and away ends of European cities to this day, celebrating the moment when Gary McAllister stuck a penalty - awarded for a Kluivert handball - past a young Pepe Reina, only three days after the veteran Scotsman had been the author of another epic moment with his last-gasp free-kick winner against Everton at Goodison Park.

The Reds certainly made up for any lack of semi-final drama in the final against Alaves, a topsy-turvy 5-4 win at Borussia Dortmund’s Westfalenstadion finally settled by a Golden Goal.

These were the days when the Champions League featured a second group stage, and it was there that Liverpool and Barcelona were reunited seven months later.

Both sides had topped their respective sections in the first group stage but the Catalans, now coached by the aforementioned Rexach, registered a first victory over Liverpool at the fifth attempt that November at Anfield. Michael Owen, who would be awarded the Ballon d’Or a month later, opened the scoring with a nonchalant chip over Roberto Bonano, but the sides went in level at the break after Kluivert got his revenge with a volley from a delightful Rivaldo assist. 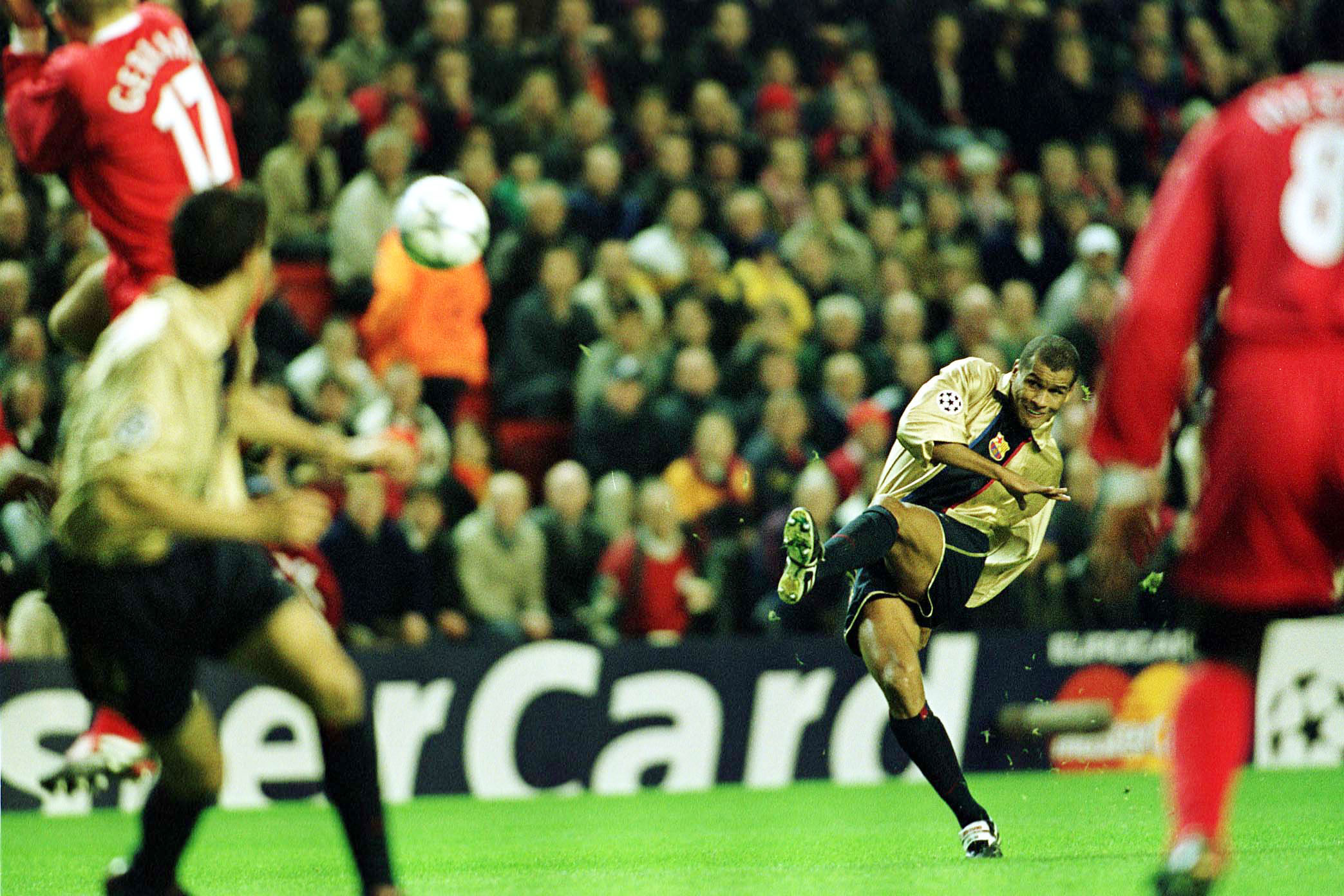 Decked out in an eye-catching gold strip, Rexach’s side showed their class in the second half, future Middlesbrough man Fabio Rochemback swerving one into the top corner before Overmars showed his pace to seize on a long pass and round Jerzy Dudek.

The return, played a full four months later in March, was a much more humdrum affair, but the outcome – another 0-0 at Camp Nou – was satisfactory for both parties, as both ultimately progressed ahead of Group B rivals AS Roma and Galatasaray.

Liverpool, taking part in Europe’s premier club competition for the first time since 1985, would be eliminated by Bayer Leverkusen at the quarter-final stage, while Barca fell to arch-rivals Real Madrid in the semis.

The fourth chapter of this tale is perhaps the most fondly remembered from a Liverpool perspective, and not simply because the memories of it are fresher.

Back in early 2007, Frank Rijkaard’s Barcelona were the eminent power in European football – Champions League holders, reigning La Liga champions and neutrals’ favourites thanks to their slick style of play and the star power of Xavi, Deco, Ronaldinho plus a 19-year-old Lionel Messi, already distinguishing himself even amongst that stellar company.

Stood in their way were Rafael Benitez’s Reds, the team that had lifted Ol’ Big Ears in sensational circumstances two years prior in Istanbul but saw their first defence of the trophy end with a last-16 defeat by Benfica.

Benitez, a seasoned visitor to Camp Nou from the early years of his coaching career, devised a daring game plan which entailed pushing John Arne Riise into midfield in a 4-4-2 formation, with the right-footed Alvaro Arbeloa shifted to left-back to try to counteract Messi. 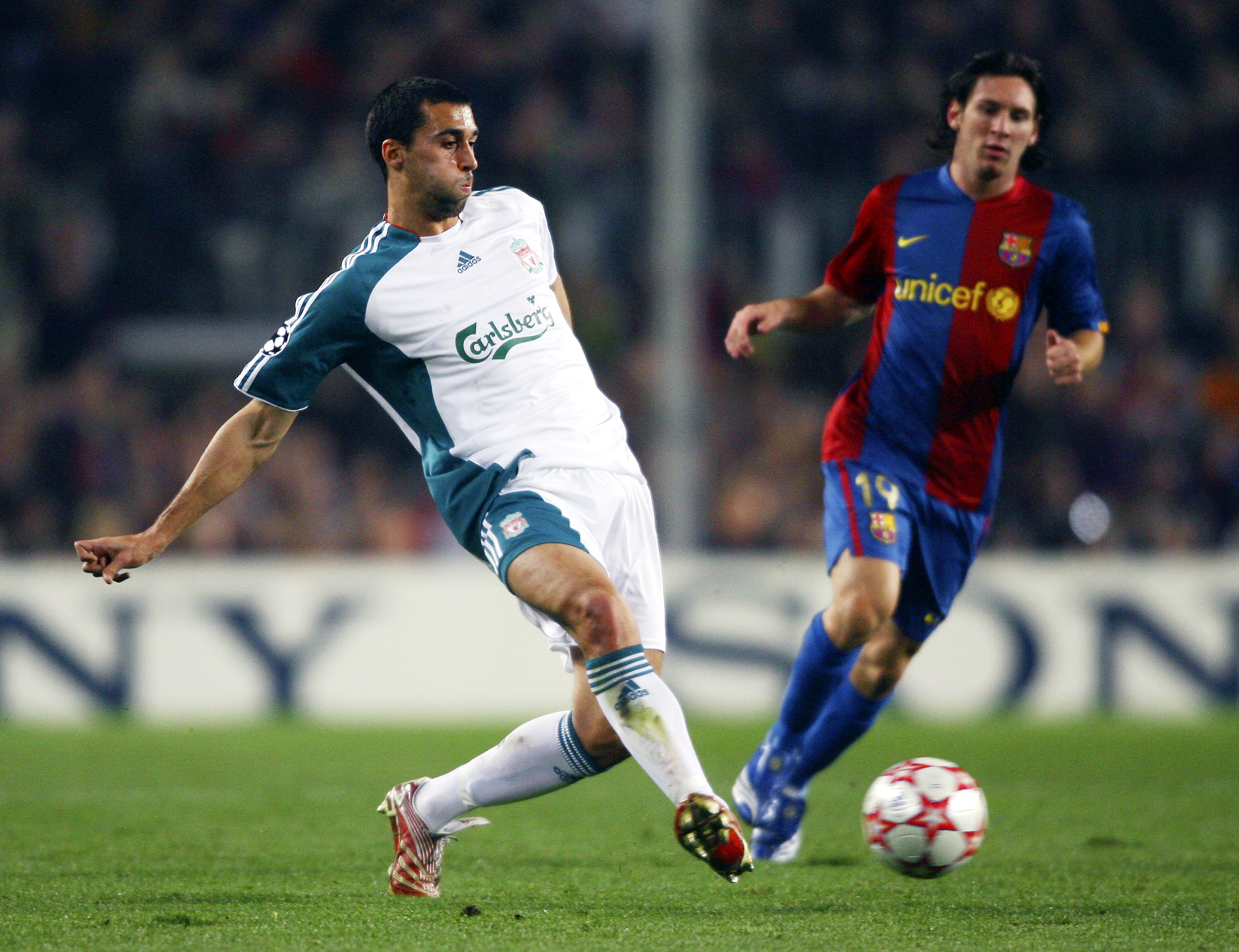 The ploy did not appear to be having the desired effect when Deco nodded home a Gianluca Zambrotta cross in the 14th minute, but Craig Bellamy equalised on the cusp of half-time with a header which Victor Valdes caught but couldn’t prevent crossing the line.

With Messi struggling to make any impact due to the close attentions of Arbeloa, Liverpool pushed on in search of their second victory at Europe’s largest football stadium – and got it thanks to another unlikely hero’s intervention with 15 minutes left.

Bellamy gathered a rebound and quickly directed a pass to the wide open Riise for the Norwegian to instinctively slam a shot into the top corner of Valdes’ net with his wrong foot. 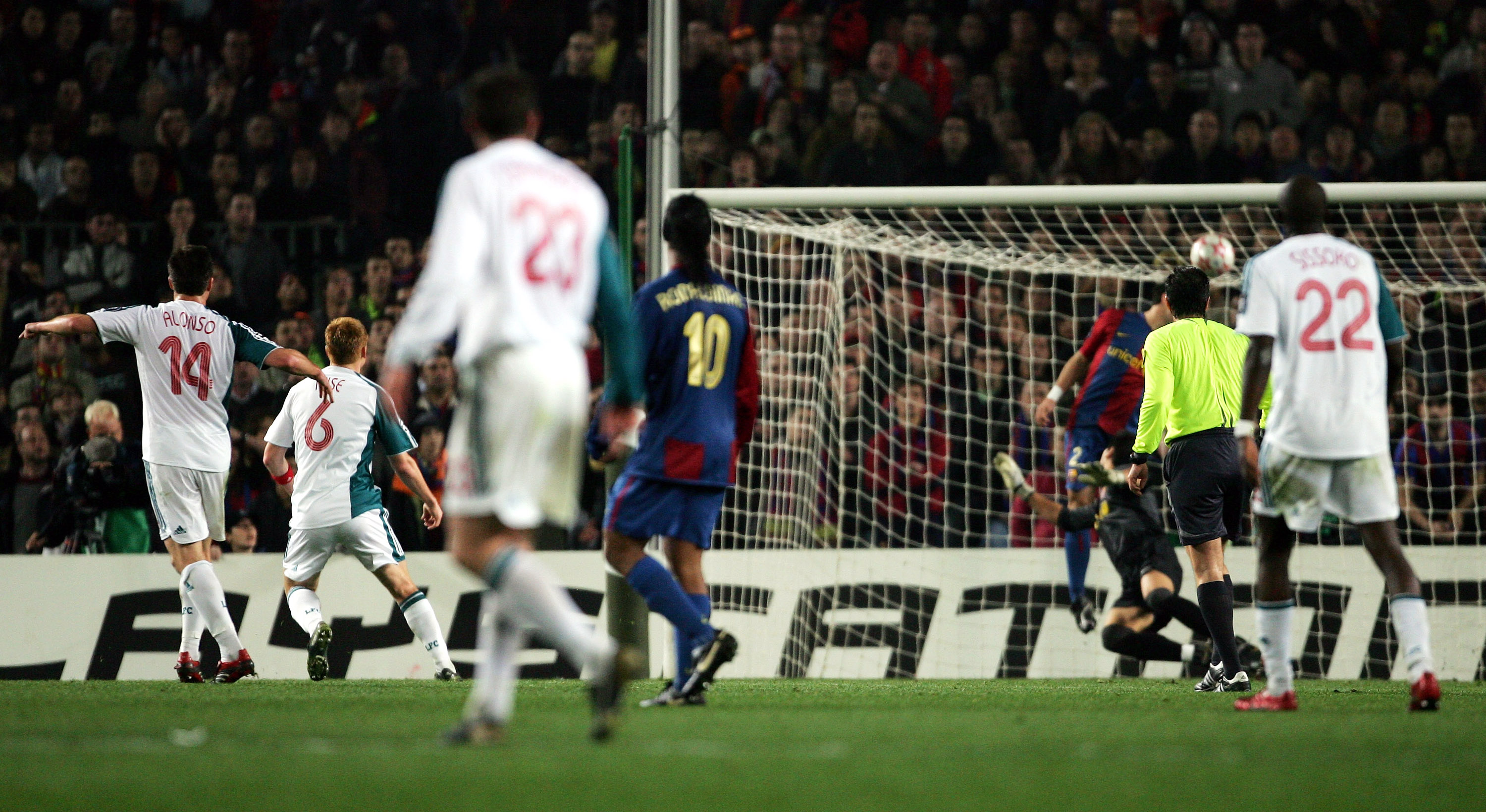 The job wasn’t done yet, but after a tense second leg at Anfield – featuring a particularly excruciating 15 minutes for Kopites following Eidur Gudjohnsen’s late goal – Liverpool and Benitez had kick-started another Champions League adventure which would culminate two months later with a narrow defeat against AC Milan in the Athens final.

“I feel this is the greatest victory this club has ever had in Europe,” Carragher commented after the second leg. “Even though we have knocked them out they are still the best club side in the world, so beating them is a remarkable achievement over two legs.”