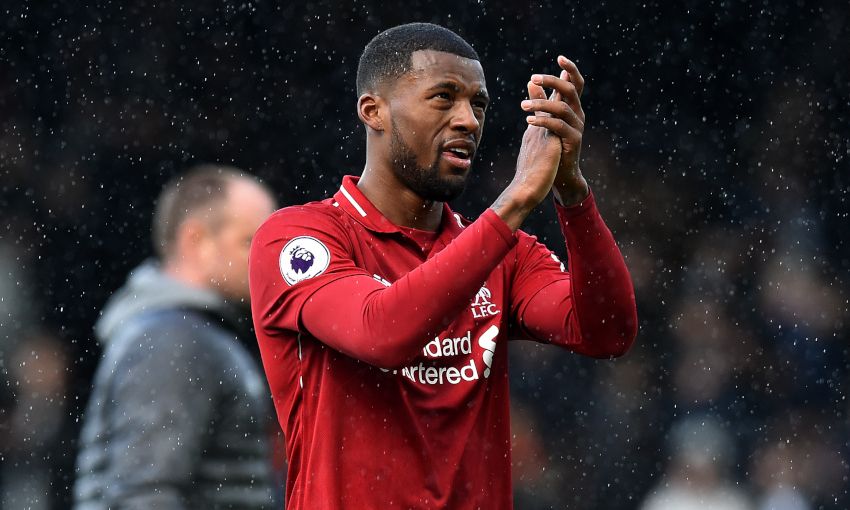 Georginio Wijnaldum sees a Liverpool side comfortable with the pressure involved in pushing to win the Premier League title.

Another afternoon of high drama unfolded at Anfield on Sunday as the Reds reclaimed top spot, two points ahead of Manchester City having played a game more, courtesy of Toby Alderweireld’s last-minute own goal.

The 2-1 victory over Tottenham Hotspur ensured Jürgen Klopp’s side did not lose ground in the race with City, who had beaten Fulham the previous day.

Six Premier League fixtures now remain for Liverpool and Wijnaldum is confident the players are equipped to continue to handle the intensity of the run-in.

“We will see. I hope so. What I feel in the team is that everyone is quite comfortable with the situation we’re in,” the midfielder told Liverpoolfc.com.

“We always have to wait until when [we have to show] we can handle the pressure – until now it’s going well so we have to keep it like that.”

The Reds were, of course, the recipients of a huge slice of luck in the showdown with Spurs.

After goals in either half from Roberto Firmino and Lucas Moura, plus a crucial intervention by Virgil van Dijk to deny a two-on-one counter-attack five minutes from time, Mohamed Salah’s header was pushed off Alderweireld and into the net by Hugo Lloris.

Wijnaldum was delighted with the moment of fortune – the kind he feels every team battling for success will need at stages of their campaign.

“At times, you really need it. Every team during the season needs luck, especially if you play for things,” reflected the Dutchman.

“There were also moments in the season where we didn’t have the luck we’ve had now and that cost us points. It’s good to be on the other side, where the luck is, and win this game.

“After their goal, I thought we started to play football again and do better; they still had chances because we were searching for 2-1.

“They had counter-attacks where they had really good chances but those things happen when you play to score a goal, especially the way we were playing the spaces were really big and they have quality players to use that.

“We were lucky that they didn’t score a goal and, in the end, we scored.”