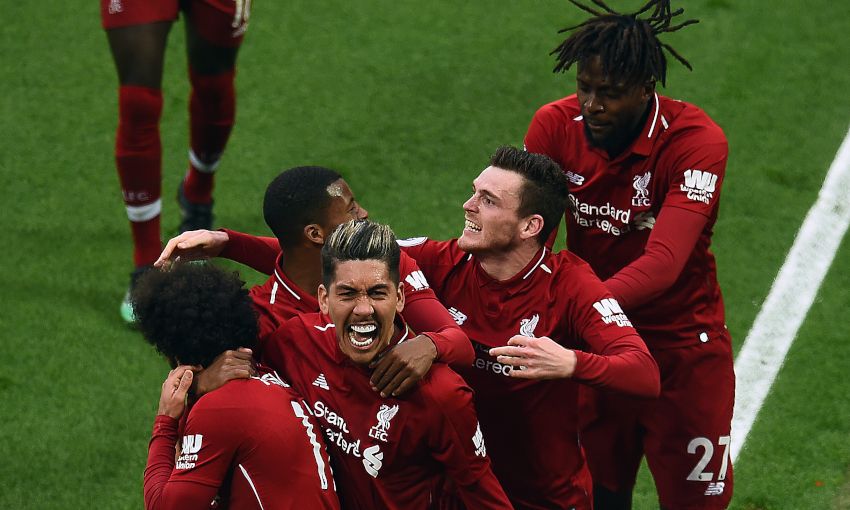 Liverpool might look back on Sunday's last-minute win over Tottenham Hotspur as the crucial moment in their title challenge, according to Andy Robertson.

A Toby Alderweireld own goal settled a breathless Premier League clash in the Reds’ favour to return Jürgen Klopp’s side to the summit, two points clear of Manchester City.

It was another moment of high drama in an intense race with City that seems destined to be decided by the smallest of margins.

And Robertson hopes, come May, Liverpool will reflect on the breakthrough as a pivotal point in their quest for a much-coveted championship.

“Whether it’s us or Man City who win the league, we’ll look back and there’ll be crucial goals and crucial wins,” the left-back, who created the opening goal for Roberto Firmino in the 2-1 victory, told Sky Sports.

“This will be one of them for us because it was so late on against a very good team; you think it’s going to end in a draw or even they’re going to win it, because they’re pushing forward as well. To win it, I’m sure we’ll look back and it’ll be a good three points for us.”

Watch: Every angle of Robbo's assist

After Liverpool had much the better of the first half, Spurs took command in the second period and levelled in the 70th minute through Lucas Moura.

But for a remarkable piece of defending by Virgil van Dijk to thwart a two-on-one situation, Mauricio Pochettino’s side could have edged in front too.

And Robertson admitted the overriding feeling when Alderweireld knocked the ball into his own net in the final minute was pure relief.

“[It was] massive. In the first half an hour, I thought we blew them away if I’m honest. We played really well, without getting the second goal we needed,” said the Scot.

“Then we got a bit sloppy and you can’t do that against a good team like that; to be fair to them, they beat us comfortably in the second half.

“But these lads go right to the end, another late winner – yes, it’s a bit fortunate but we fought right until the end. It wasn’t the best second half for us but it’s all about three points and we’re back top of the league.

“Relief is the word. Every team in the league is fighting for something at this point of the season.

“Probably at the start of the season we wouldn’t have left Virgil in that position but we knew we had to win this game, that’s why maybe we left ourselves open at the back – and he did magnificently to keep it at a draw.

“Then when you see the ball go into the back of the net, especially when it’s that fortunate and you think the chance has gone, it’s just relief. It’s about all of us getting together and celebrating, then digging deep because they threw everything at it. We dug deep and saw out the last four minutes.”