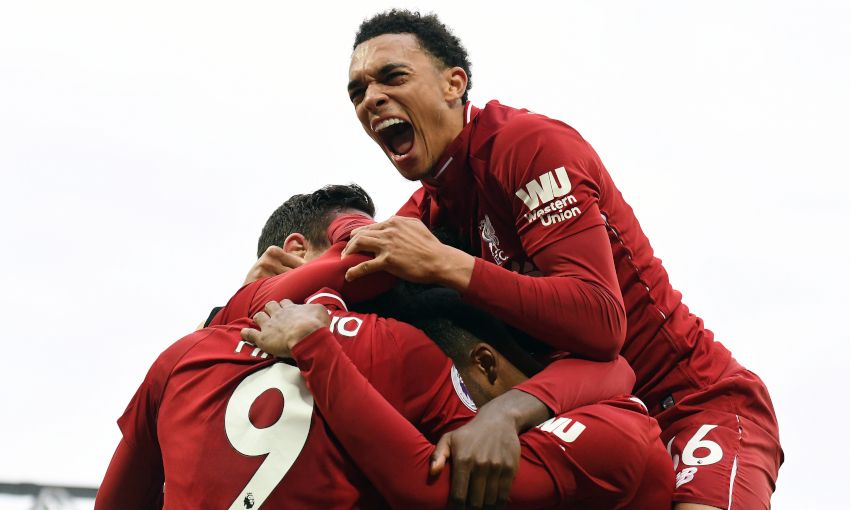 Trent Alexander-Arnold accepted that Liverpool rode their luck en route to a dramatic victory over Tottenham Hotspur but insisted: "It's all about the points."

The Reds had the better of the first half at Anfield on Sunday and headed into the interval a goal to the good courtesy of Roberto Firmino’s clinical header.

But Spurs were galvanised during a dominant second-half performance that brought a deserved leveller from Lucas Moura 20 minutes from full-time.

Just when it looked like Liverpool would drop crucial points in the title race, however, Alexander-Arnold’s deep cross was headed at goal by Mohamed Salah and bundled in off Toby Alderweireld.

Watch: The drama at Anfield in 90 seconds

“Relief, more than anything,” the right-back told Liverpoolfc.com of his emotions when the ball drifted over the line to prompt pandemonium on the Kop.

“Obviously they had a massive chance near the end of the game, just before we scored, and Virgil [van Dijk] showed why he is probably one of the best defenders in the world with his decision-making, the way he closed the angle down and put pressure on their player at the end.

“We went up the other end and it was very fortunate, but a goal is a goal and a win is the most important thing we wanted – and that’s what we got.”

No matter how it came about, the win lifted Liverpool back above Manchester City and into a two-point lead over the reigning champions at the Premier League summit.

Alexander-Arnold continued: “With top sides, especially the teams near the top of the table, you’ve got to expect to be under the cosh a little bit during games and for them to have the ball and dominate you.

“It was tough, they are a really top side and they might feel like they deserved a little bit more but we showed we wanted it more and that we’re a top side.

“We’re not really fussed how we get the win anymore, it’s all about the points we can get – that’s the main thing for us.”

The heart-pumping conclusion to the contest was reminiscent of Divock Origi’s stoppage-time intervention in December’s Merseyside derby at Anfield.

It was also the second successive Premier League match in which the Reds have secured three points with a late strike to win 2-1 – and Alexander-Arnold is proud of the team’s resolve.

“We showed we can get late goals this season – Chelsea away, Everton at home and the last two fixtures. We’re showing we’re going to the end,” said the No.66.

“We can grind out wins, we’ve got all different types of wins this season and hopefully that’ll carry on in the next six games.”