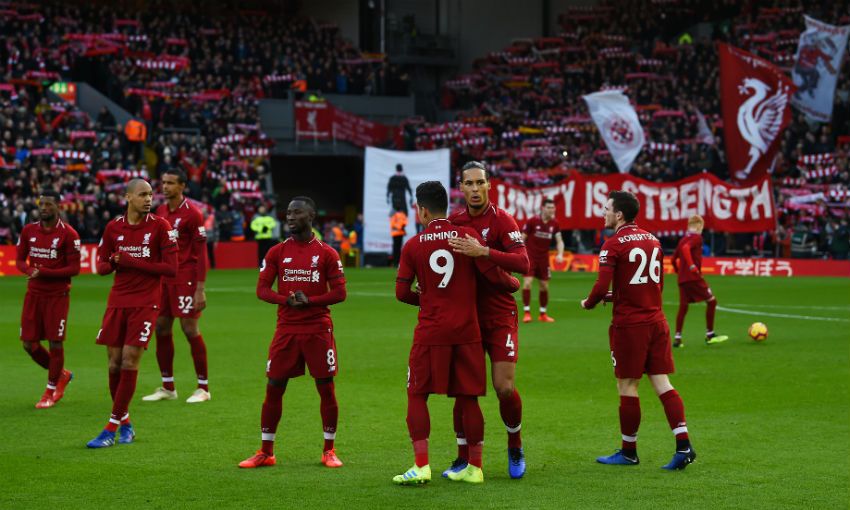 A continuation of the harmony that exists between players, manager and supporters can carry Liverpool to glory this season, Sir Kenny Dalglish believes.

As the conclusion of 2018-19 nears, the Reds remain in the hunt to win the Premier League and Champions League.

Jürgen Klopp’s team sit top of the table domestically - although Manchester City, two points behind, have a game in hand - and face FC Porto in the last eight of Europe’s elite club competition next month.

Dalglish, of course, knows a thing or two about successful run-ins.

And the legendary former player and manager has highlighted the importance of a collective effort in the final weeks of the campaign.

Dalglish told Liverpoolfc.com: “The position we’re in in the league, you can’t beat first. Quarter-finals of the Champions League, you can’t go much further than that - they’re only up to the quarter-final stage! So I think the boys can be hugely proud of how they’ve gone about their work this year, and I think with Jürgen there’s a great relationship between him and the players.

“They’re where they are because they deserve to be. They’ve got there on merit, they’re not there because somebody else has tripped over or anything: they’ve done what they need to do and they’ve done it brilliantly.

“You are where you are because you deserve to be there. What you’ve done before this stage must have been right. We’ve got a fantastic manager who really fits into the football club perfectly well.

“I don’t think the club have ever won a title of any substance like the FA Cup, League Cup, league or Champions League without the fans making a huge contribution. So collectively, with the way they’ve been playing, with the manager and the supporters, it’s going to be a hard team that’s going to get past us.

“We’ve just got to continue to do what we’ve done before. Nobody needs reassurance about their ability to play or their ability to win games - they’ve shown it. And you’re not getting carried away, you’re not taking anything for granted [by saying that], I think it’s just common sense.”

Being top of the table heading into the season’s final stretch is not a position often experienced by Liverpool in the Premier League era.

So, should Klopp’s squad be relishing that status as opposed to feeling any sense of anxiety?

Absolutely, according to Dalglish.

“It’s about how you feel within yourself, that’s the most important thing,” he stated. “What goes on inside the football club is more important than the external stuff.

“I would say that most games that you go to play, you’re going to be nervous. We were nervous before every game and if you’re not nervous, I think you’ve got a problem. If you’ve got your nerves and a wee bit of anticipation, then you’re looking forward to the game and I don’t see anything wrong with that.

“So just carry on what we’ve done before. People will have their say, it’s up to them, and at the end of the season they’ll add up the points and you’ll see how well you’ve done in the Champions League and you’ll assess it then.

“There’s no need to go assessing things now or to try to predict what’s going to happen between now and the end of the season.”

Sir Kenny Dalglish: Jürgen is a Scouser - he epitomises what this club is about

Jürgen Klopp: We sent Sir Kenny our best wishes – we love him