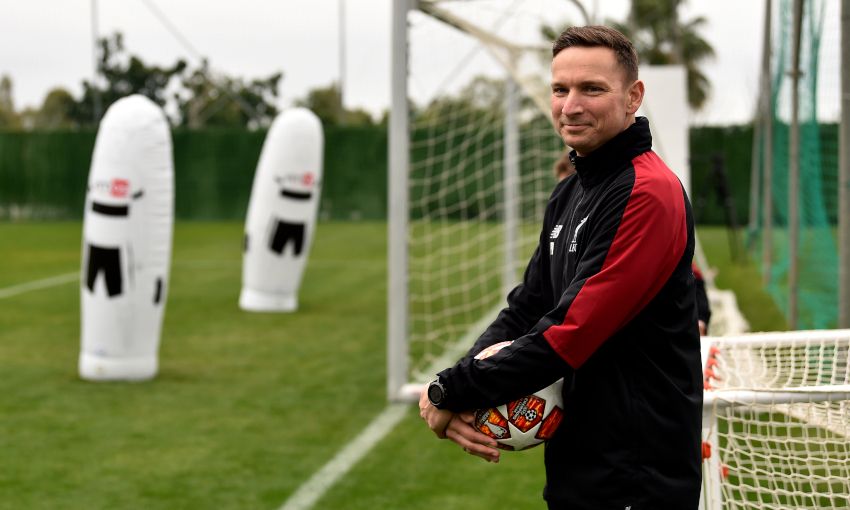 That’s the bottom line of Liverpool’s development this season, according to Pepijn Lijnders.

Their broad skillset has been on show ever since the beginning of an outstanding campaign that arrived at a brief pause this week, allowing the Reds to arrange a four-day training camp in Marbella before the Champions League tie with Bayern Munich and the resumption of their Premier League title tilt.

The squad of players assembled by Jürgen Klopp and his staff believe they have the ability to match, and better, any team placed in front of them – a mentality that will, of course, be examined during the run-in.

But their faith is not plucked out of thin air. It has been built and solidified around a shared collection of values, a mutual determination not to settle for less than their full potential.

“Everything starts and finishes with the passion and ambition of the team. Everything about this team is glued by togetherness and by character,” assistant manager Lijnders told Liverpoolfc.com in Spain.

“We know if we give everything, every day, then we can beat probably every team, or at least we can create a lot of problems against them. The boys know that and that’s the only way to prove [it]. 90 per cent of the three points are made in the week before the game, we believe in this.

“Probably we only have one rule: that’s always 100 per cent attitude.

“It all comes together, of course, but it starts with the boys having this passion to be better and better, not just individually but as a group. That drives our development and it’s a big plus for them.”

It is no accident, either, that each player possesses that required attitude.

Because, when the club dips into the transfer market, the necessary mindset must be identified in a prospective signing during the recruitment process.

“We look really [carefully] at the talent of the player when we contract players, and what they add in certain positions,” added Lijnders.

“We search for that type of player. One, talent, absolutely; but probably before it is the character of the player.”

Liverpool departed for Marbella on the back of a confident 3-0 victory over Bournemouth at Anfield.

In his assessment of the performance, Klopp highlighted the timely return of his side’s intense counter-pressing – which he felt was lacking in the preceding draws against Leicester City and West Ham United – as an influential factor on the outcome.

But which forces dictate the effectiveness of the tactic? Why can it work in one match but not another?

Lijnders replied: “Attitude and readiness. Wanting to win the ball back as quick as possible and shock the opponent. Understanding that a good player changes completely when he is put under real pressure.

“The games before – West Ham and Leicester – we had problems with this moment. Everyone was saying we were conceding more goals, with the Palace game as well.

“That made it possible that the opposition could counter into the free spaces.

“First of all, [the players] had to understand again and second, correct certain positioning on the pitch when we were preparing the ball in losing situations, so the opposition couldn’t counter.

“Everybody says it was the defending, but that was not the case – it was the case that we didn’t have enough control and enough dominance in possession in the opposition half.”

Lijnders describes the possibilities ahead of Liverpool between now and May as a ‘big chance, nothing more’.

But the Dutchman disagrees with any suggestion that those hoping to lead the club to a maiden Premier League triumph are afflicted by pressure.

He sees a squad fully ready to tackle the race at the top of the table – and the coaching staff will be doing everything in their power to enable the players.

“I think the most important thing is that we feel excited, that we don’t feel pressure, that we did a lot of hard work and that we prepared ourselves for these moments,” added Lijnders.

“It is a crucial period where we have to keep searching for the next step – and if we keep focusing on ourselves, on how we want to play, how we want to develop, how we want to put each team under pressure, then the results will come by themselves. That’s important.

“It’s a big chance, nothing more. We want to deserve it.

“I feel that the team is ready to play against whatever team, wherever, and that we can create problems [for the opposition] because of this.

“We need to use training the best we can, we have to really be prepared for the games in the same manner. That’s it. I am pretty convinced we will find solutions again and again.”

Pep Lijnders: Our main strength is that we’re always together

'A Ferrari without fuel is nothing - but Trent has so much fuel!'