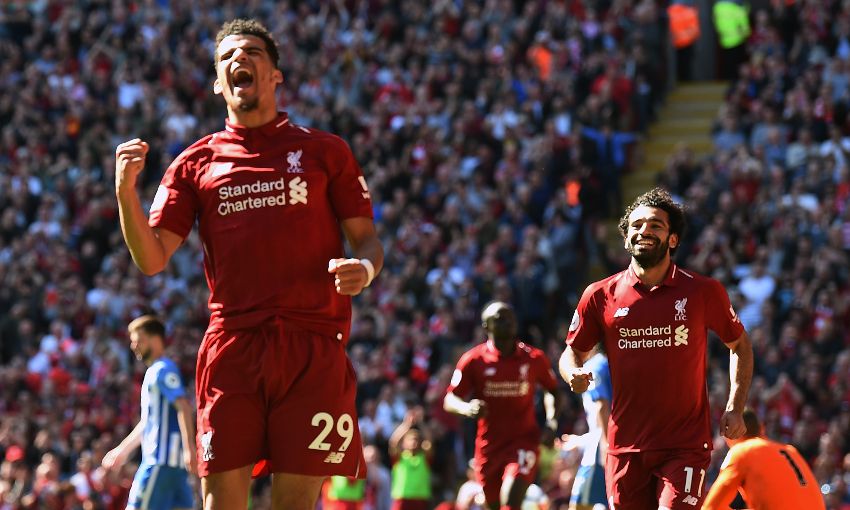 Dominic Solanke's mind went blank when the dream of his first Liverpool goal became a reality.

Eight minutes into the second half of Sunday’s Anfield win over Brighton and Hove Albion, the striker ended the ‘annoying’ wait to open his account for the club.

Collecting Mohamed Salah’s assist on the right hand side of the area, Solanke took a touch before smacking an unerring, rising drive off the underside of the crossbar and in.

“I saw Mo pick up the ball and beat his defender like he always does,” he told Liverpoolfc.com when asked to talk through the moment.

“I made a dart across the opposite way and he slipped me over a great pass. I hit it… and after that, it was just amazing.

“Especially to do it here at Anfield in front of all of our fans. We knew we had important games at the end of the season, we knew we had to get a result and we did that so everybody is really happy.”

Solanke’s breakthrough strike came on his 27th appearance for the Reds.

Signed last summer, the 20-year-old has been patient and professional throughout his debut campaign – with a helping hand from Jürgen Klopp.

“It’s always hard when you’re not scoring, you get a few chances here and there, and it doesn’t quite go for you. You’ve just got to keep your head up and keep going. It paid off,” he said.

“It has been fantastic. The faith the manager has had in me is amazing, I’m so thankful for that and for him to play me in this game again. I managed to get my goal for the team, I’m really happy to be with this team.”