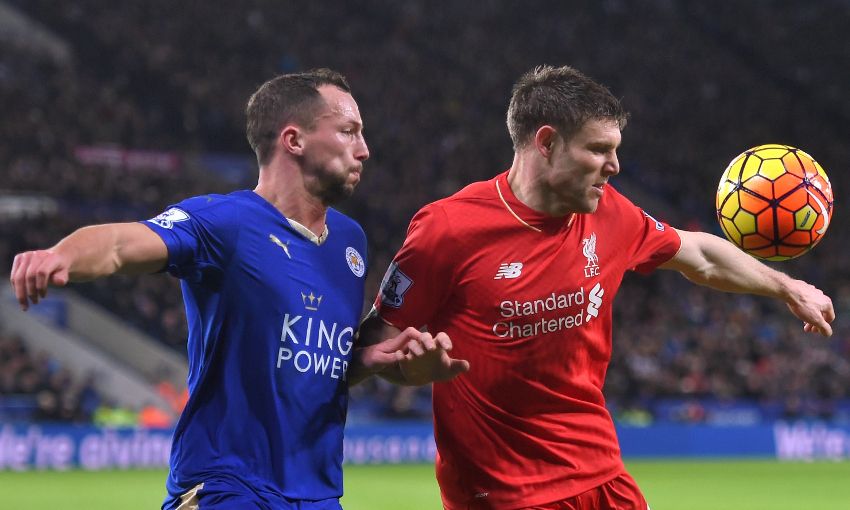 Liverpool were left disappointed after they were beaten 2-0 by Barclays Premier League leaders Leicester City at the King Power Stadium on Tuesday evening.

Jamie Vardy’s spectacular long-range effort opened the scoring with an hour played in the Midlands, with the striker beating Simon Mignolet with a dipping half-volley after pouncing on Riyad Mahrez’s long ball forward.

The striker added a second soon after, driving home from close quarters after Shinji Okazaki’s attempted shot was deflected across goal and into his path to condemn the Reds to defeat.

Jürgen Klopp elected to make eight changes as Liverpool resumed league duties, with only Mignolet, Dejan Lovren and Nathaniel Clyne retaining their places from the side deployed in Saturday’s FA Cup tie against West Ham United.

With just over a minute on the clock, those of a Leicester persuasion were clutching their heads with their hands as Mahrez skipped into space on the edge of the box and arched an effort narrowly wide of the base of the post.

The hosts started with an intent to assert themselves right from the off, and they were foiled from taking the lead once again moments later when Mignolet produced a fine close-range save to push Okazaki’s header from Vardy’s cross onto the bar and behind.

At the other end, a well manufactured move involving Alberto Moreno, James Milner and Jordan Henderson resulted in a chance for Emre Can on the edge of the six-yard box. Kasper Schmeichel repelled his acrobatic attempt, but the German was flagged offside in any case.

Mahrez then tested Mignolet again with a dipping volley from distance, but gradually Liverpool were beginning to impose themselves in what was proving an absorbing contest.

On 33 minutes, Leicester hearts were in mouths when Christian Fuchs’ headed clearance only just cleared his own crossbar while under pressure from Henderson.

It was end-to-end stuff and only a strong left hand from Mignolet prevented a long-range rasper from Mahrez finding the net soon after, before Moreno spurned a glorious chance inside the area as the Reds countered, electing to blast high off target after being slipped into space by Firmino.

It meant half-time was reached without a goal, but that statistic was almost altered in the opening minutes of the second period when a string of slick passes opened up the Foxes, but Can’s eventual strike was deflected behind.

The encounter had lost none of its spark during the interval and after Okazaki scooped over from the edge of the box for Leicester, Lucas Leiva hammered wayward from Moreno’s pull-back.

The Spaniard then drew a save out of Schmeichel as he tried to catch the goalkeeper off-guard with a near-post thump when the stadium anticipated a delivery into the centre.

Liverpool were seeing far more of the ball than their opponents in the early stages of the second half, but the deadlock was broken against the run of the play on the hour.

Mahrez’s long ball down the home side’s right was met by Vardy’s run, and the striker allowed the ball to bounce before finding the top corner with a dipping half-volley from distance.

Klopp’s response saw Henderson withdrawn for Christian Benteke, but the Reds’ hopes of salvaging something from the game suffered a major blow when Vardy claimed his second on 72 minutes.

Okazaki’s attempt from the right corner of the area struck against a visiting defender, but rolled kindly across goal for the Leicester No.9 to slam beyond Mignolet and seal three points for the hosts.