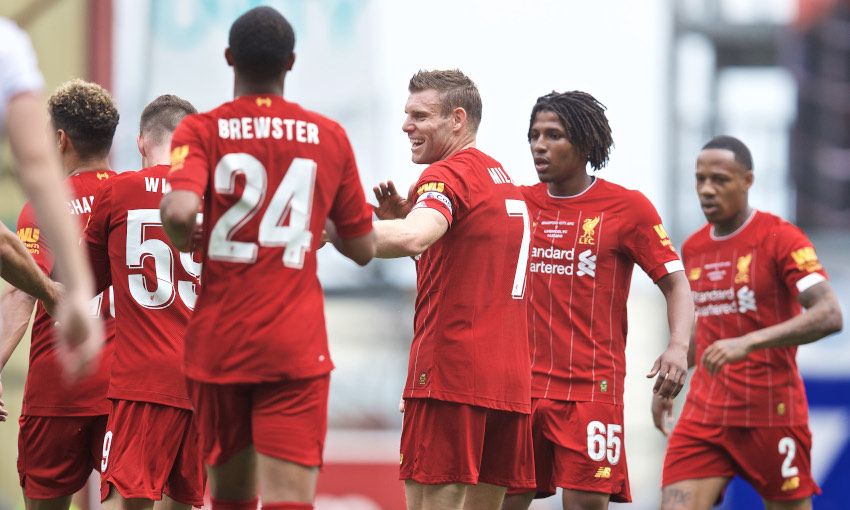 Liverpool’s pre-season preparations continued with a 3-1 win at Bradford City on Sunday afternoon.

James Milner’s deflected shot and penalty gave the Reds an early two-goal lead before Rhian Brewster grabbed a third before the half-time break.

There were no further additions to the scoresheet in the second period for Jürgen Klopp’s side, though Bradford did pull one back from the penalty spot through Eoin Doyle late on.

Nevertheless, Liverpool picked up a second victory in four days prior to jetting off to the United States on Tuesday.

The fixture was, of course, not only about the teams’ preparations for 2019-20. The match was also scheduled to raise funds and awareness for the Darby Rimmer MND Foundation – the charity organisation that was set up after former Reds and Bantams defender Stephen Darby was forced to retire from professional football last year at the age of 29 having been diagnosed with motor neurone disease.

In terms of team news, Klopp welcomed Dejan Lovren back into his starting line-up as a total of 22 players were used by the boss at the Utilita Energy Stadium.

Once under way, Liverpool opened the scoring in the 13th minute when Milner’s shot from the edge of the box following a short corner was headed beyond his own goalkeeper by James Vaughan.

Less than 120 seconds later, it was 2-0. This time Milner converted from the penalty spot after Ryan Kent had been felled by Sean Scannell following a neat one-two with Brewster.

Next, only a fine one-handed save from Richard O’Donnell at point-blank range denied Harry Wilson a goal after the winger had broken into space inside the box and attempted to dink beyond the goalkeeper.

Bradford thought they’d reduced the arrears just before the half-hour mark, but Ben Richards-Everton was ruled offside when he nudged in from a free-kick.

Vaughan then had an effort spectacularly saved by Simon Mignolet prior to Liverpool’s third goal.

Alex Oxlade-Chamberlain powered through the centre of the park and released Kent down the left. He pulled it back for the No.15 inside the area, but his strike was blocked by Anthony O’Connor. However, Brewster was on hand to steer the ball into the net from a tight angle.

Klopp made 10 changes during the interval, with only Mignolet retaining his place on the pitch for the Reds.

Curtis Jones and Liam Millar both went close to increasing the visitors’ advantage prior to the hour, while the latter also had a run and shot repelled by substitute ‘keeper Sam Hornby.

Bradford were awarded a penalty when Adam Lewis collided with Clayton Donaldson inside the box. Doyle dispatched the resulting spot-kick beyond Mignolet with nine minutes remaining.

Liverpool now head to North America for their three-game tour, where Borussia Dortmund, Sevilla and Sporting CP will provide the opposition.

Video: Behind the scenes of an emotional day at Bradford