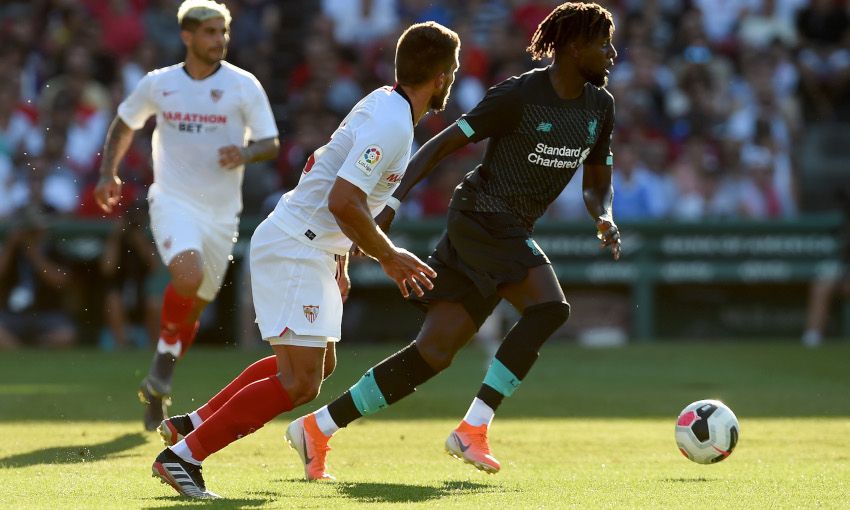 Liverpool’s pre-season preparations continued with a 2-1 defeat to Sevilla at Fenway Park on Sunday night.

Divock Origi pounced to sweep in from close range and level the scoreline before half-time after Nolito had clipped the Spanish side into the lead.

Sevilla were reduced to 10 men with 15 minutes remaining when Joris Gnagnon was shown a straight red card for a wild challenge on Yasser Larouci.

However, they snatched victory in the final minute when Alejandro Pozo rounded Simon Mignolet and slotted into the empty net.

The teamsheet confirmed Jordan Henderson, Virgil van Dijk, Georginio Wijnaldum, Trent Alexander-Arnold and Andy Robertson were to be handed their first starts of the summer and Andy Lonergan was given a debut in goal as Fenway sweltered in temperatures well in excess of 30 degrees.

First, Alexander-Arnold and Alex Oxlade-Chamberlain combined down the right to deliver a ball towards the back post, where Ben Woodburn was inches away from turning in.

Then, Origi held off the challenge of Sergio Reguilon to power his way in on goal, only to be thwarted by a save at his feet by Sergio Rico.

Sevilla responded by creating a flurry of chances in quick succession as Diego Carlos planted a header wide from a corner and Luuk de Jong scuffed a volley off target when well positioned.

On 13 minutes, De Jong found himself with only Lonergan to beat; however, the goalkeeper marked his first appearance for the club with a fine sprawling save.

Lucas Ocampos was next to try his luck as he arrowed a low strike wide of the far post after Liverpool conceded possession outside their own area.

Sevilla’s pressure finally told in the 38th minute when a low ball into the area ran into the path of Nolito, who took a touch before dispatching beyond Lonergan with a sweeping finish.

However, Liverpool drew level two minutes before the break, Nat Phillips nodding down an Alexander-Arnold corner, which deflected into the path of Origi. The striker swivelled to dispatch into the back of the net from close range.

Klopp made 11 changes at the interval, with Sevilla also swapping nine of their starting line-up.

It was two of the Reds’ new introductions who combined to deny Ocampos as James Milner and Joe Gomez halted the winger’s dangerous run and shot four minutes into the second period.

Liverpool had again started the brighter of the teams in the half; however, Mignolet was required to produce a fine double save to firstly keep out Munir El Haddadi’s snap-shot and Franco Vazquez’s follow-up from the edge of the area. 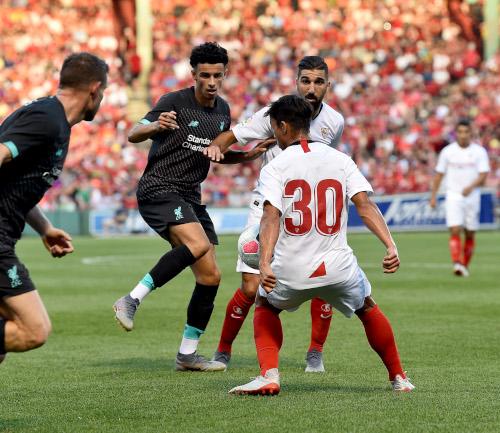 On 68 minutes, Rhian Brewster and Curtis Jones linked well as the latter brought a stop out of Tomas Vaclik at his near post.

Jones was heavily involved again when he teed up James Milner on the edge of the area, though his eventual strike crashed against a Sevilla defender.

The La Liga club went down to 10 men with a quarter of an hour remaining when Gnagnon was dismissed for kicking out at Larouci, which left the young full-back unable to continue.

But Sevilla were able to claim victory when El Haddadi squared for Pozo, who side-stepped Mignolet and rolled the ball into the goal.