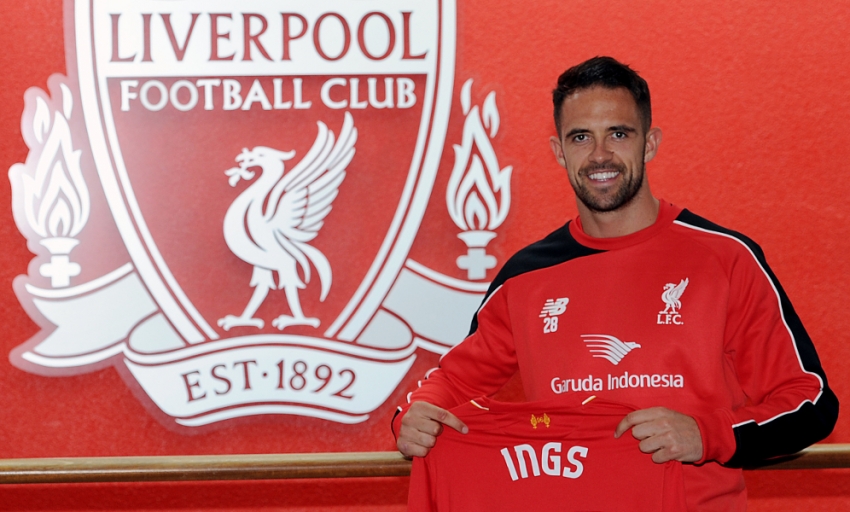 Danny Ings today gave his first interview as a Liverpool player after making a switch to Anfield from Burnley – read on to get the striker's thoughts in full, while the whole chat can be watched on LFCTV GO.

Welcome to Liverpool FC - how does it feel to officially be here?

It feels fantastic. Obviously I had a summer away but at the same time I was really looking forward to getting in and meeting everyone.

When you heard of the interest, how quickly did you want it done, with the intent that Liverpool had shown to get you here?

Straight away really - as soon as I knew that Liverpool were interested, it was a no-brainer. It was the only club on my mind, to be fair. And now that it has happened, it's fantastic for me and my family.

The manager will have played a big part in getting you here. What has he said to you about the kind of player that he thinks you can become?

He's fantastic at developing young players. For a player like me, I think it will be perfect to work with him; I'm really looking forward to getting that relationship with him and the rest of the coaches and the players as well. It's something I'm really excited to do.

What has he said to you about where he can take you in the future?

First of all, he wants me to come in, settle in and get used to the lads and enjoy training. Then we're going to do some tactical stuff, which he does with every player, as you do coming in. Then obviously I'll see how his team plays and how I can adapt to the way that Liverpool play. It's definitely going to be a challenge but it's a challenge that I'm looking forward to. I just can't wait to get started.

What about coming into Melwood and seeing the place? There's a magic about Liverpool, isn't there?

It's a special club, everybody knows it. With all the history that's here. Everybody knows about Melwood. Today, to come in and see everyone and all the staff, it's definitely a massive step in my career and I'm over the moon.

When you look around, are there quite a few faces that you know? Because that helps the settling-in process if you know a couple of the lads here already...

It does. Playing against them, you sort of have an understanding of each other, so you sort of half know each other. I know a few of the lads anyway so I'm sure they're going to help me settle in and help me be part of the team.

You mention the manager - he has played a big part in giving young players a chance. Does that give you confidence that he can help you get onto the next level?

Of course, there's nothing better for a young player like me than to be working for a manager like that, who loves to bring all these young boys in and give them a chance. With the development that he has for young players, it suits me down to the ground and hopefully we can have a great relationship for the future.

It is a young squad when you look around, but there is also massive experience that you can learn from - players that have played in World Cups and different countries too. Is that something you're looking forward to?

Yes, definitely. You need young, hungry, developing players in your team, but you also need that experience to level things out and get hold of some of the youngsters when they need advice in certain areas of the pitch. I think there's a great mixture here and that was also one of the big reasons why I wanted to come here - to learn from other players, learn different styles of football and different opinions to make myself better.

It's always a massive sign when a club brings in quite a few players during the window - it shows that you mean business. The standard of the players that are coming in is fantastic. The players will definitely add to the team and really make it stronger.

Watch Ings on tour with the Reds this summer - click here for ticket details, or watch on LFCTV and LFCTV GO.

Strikers gravitate to strikers and you need to look no further than the likes of Daniel Sturridge for players that are proven in the Premier League, and perhaps his best football is still to come here?

Of course, he's an unbelievable striker. He is one of those players who has come through the ranks, he has not had it easy. Now he's here and he's established; he's a fantastic, talented football player I can learn from.

You've played at Anfield before, with Burnley. What was the experience like? How did it feel to play at Anfield as an opposition player?

To be honest, I didn't enjoy that night because I didn't really get a kick. I felt that every time I had the ball, there was a lot of pressure on me. With the atmosphere from the fans as well, it can feel a little bit intimidating. I wasn't intimidated on the night, I was just frustrated that I couldn't show everyone what I was capable of that night.

The atmosphere is a very special one when you become a Liverpool player - are you looking forward to that?

That was also a massive reason why I wanted to come here, because the fanbase is massive - you go anywhere in the world and there are Liverpool fans. The night was unbelievable and the atmosphere was unbelievable. Obviously Liverpool beat us that night and played extremely well, but to get a feel of what it's actually like - because I'd never played at Anfield before - it really showed me how strong the atmosphere is and how much the crowd do get behind the team. It's fantastic.

You're No.28 - what was the thinking behind the shirt number you've taken?

I had a chat with my agent and a few friends and we thought that moving to such a big club like this, you need to take all the pressure off yourself. Taking one of the low numbers does make a difference, because some of the players that have worn those shirts have been superstars and world-class players. So it was important to start with a high number and my reason is to work my way down. When I achieve success here, that's when I'll take a shirt like that; until then, I'll keep No.28, keep my head down and work hard.

Finally, what's your message to Liverpool fans and what they can expect?

Hopefully we can have a fantastic relationship. On the pitch, hopefully they get behind me and I can do extremely well for them, for myself and for everyone at Liverpool Football Club.

Klopp: Ings' surgery was successful - and we will wait for him