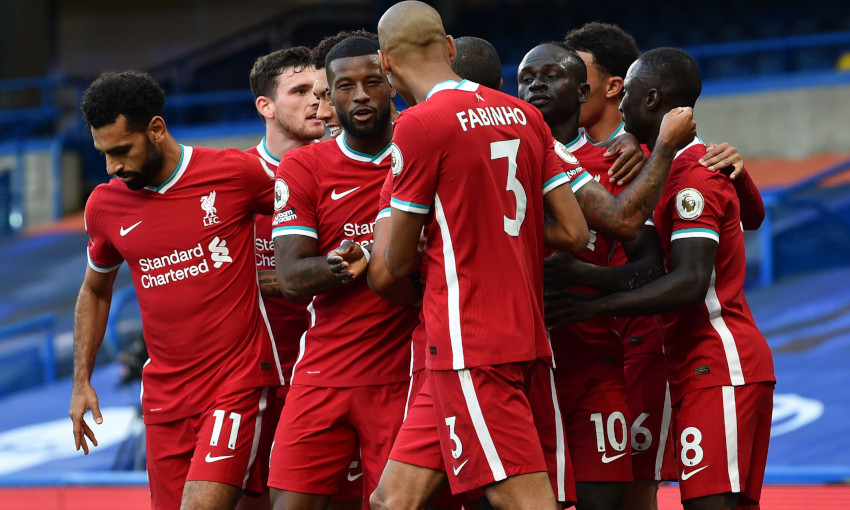 Sadio Mane struck the goals and Thiago Alcantara made his Liverpool debut as the Reds beat Chelsea 2-0 at Stamford Bridge on Sunday.

After the hosts were reduced to 10 men on the stroke of half-time - Andreas Christensen dismissed for hauling down Mane - the No.10 netted twice in four minutes early in the second half.

Alisson Becker also saved a penalty from Jorginho to add a clean sheet to an excellent afternoon for Jürgen Klopp's side.

If ever a goal could sum up a player, this was it. Mane's pass was poor. A giveaway. He was not happy with himself. So what did he do? Stand and sulk? Look around for a teammate to blame? Not a bit of it. Liverpool's Senegalese star is not wired that way. Instead, Mane hared after the ball, following it as Kurt Zouma rolled it back to Kepa Arrizabalaga in the Chelsea goal. Kepa's intention to pass out was good, but Mane read it, stretching out a foot to intercept, then firing the loose ball into the unguarded net with the goalkeeper scrambling. Two-nil Liverpool. Game, set, match. It took Mane only 10 minutes, either side of half-time, to bend this game to his will. His first goal was a gem, created by lovely slick interplay between Salah and Firmino, with the latter's cross headed powerfully past Kepa by Mane, whose movement in the box was too much for Chelsea right-back Reece James. Four minutes later came Kepa's howler. You do not relax or take risks with Mane around.

Thiago instantly demonstrated why the initial £20million the Premier League champions have paid for his services has been lauded as a steal. Anyone who witnessed Bayern Munich bludgeon their way to Champions League success last season, or watched him in action for Spain, will have known what to expect. Thiago isn't one to stand on ceremony. With such a solid first touch and range of vision, the ball isn't at his feet for long, fed to a teammate with metronomic accuracy. No sooner does he have it, then it's gone. There is an effortless ease to his play and, like all good players, when he wants time in possession, he appears able to instinctively find it. And talk about accurate. Thiago completed more passes – 75 – than any other Chelsea player managed during the entire match. And since such Premier League statistics started to be compiled in 2003, it's the most made by any player who has been on the pitch a maximum of 45 minutes.

The big question all summer has been whether Liverpool can retain their title. They delivered the answer in the most emphatic fashion at Stamford Bridge with a ruthless, clinical and brilliant victory which shows they are still the team to beat. Mane scored two remarkable goals to carry on his unstoppable title-winning form from last season but it also highlighted the value of re-energising the squad. Thiago Alcantara was a half time substitute and the £20m midfielder showed his quality. The Spain midfielder was magnificent as he was always in space to receive the ball, pick a pass and give another dimension to Jurgen Klopp's side. He looked like an orchestra conducting a symphony.

There has been a temptation to worry away at this Liverpool team. The start of the season was marked by vague talk about front-three dependence, driven not by any diminishing powers but by the sheer volume of football played by that well-seasoned Mo-Mané-Bobby front three. There is something a little counterintuitive about this. Liverpool's front three do play a lot. They play a lot because – let's be quite clear – they're brutally, relentlessly good. There is a kind of paradox to this. The Premier League is a notoriously reactive place. Opponents learn your strengths, find ways to mitigate and diminish them. So what's going on here? It's been three seasons, chaps, and they're still doing pretty much the same thing, still moving the same way, still combining in the same patterns. Mané in particular was brilliant at Stamford Bridge. At times this felt like a Mané highlights reel, or a Mané instructional video included with your brand new Sadio Mané. Then there was the finish for the opening goal, albeit this was a moment that highlighted above all the sublime, deceptively simple interplay between that attacking trident. If Salah doesn't get you, or Firmino, or Mané, then Salah‑Firmino-Mané probably will.