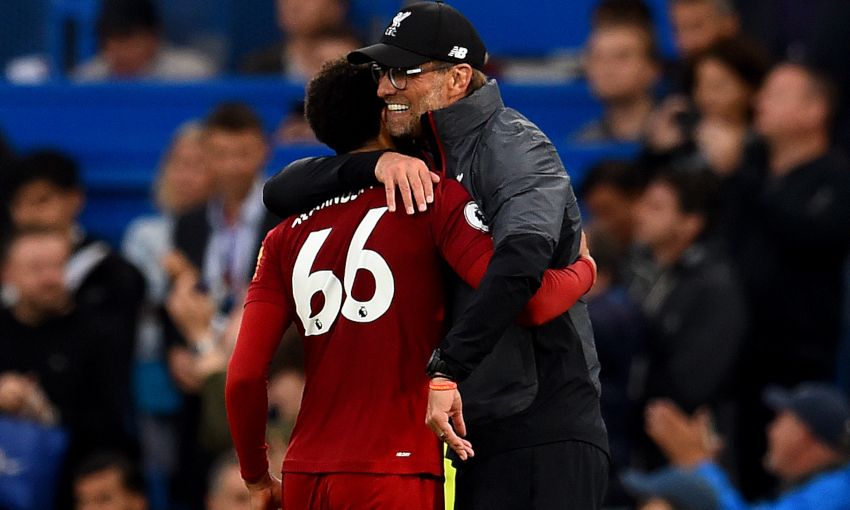 Trent Alexander-Arnold scored a brilliant free-kick and Roberto Firmino was also on the mark as Liverpool beat Chelsea 2-1 at Stamford Bridge on Sunday.

It meant the Reds maintained their five-point lead at the top of the Premier League.

And so the relentless Red machine rolls on. At times, it wasn't easy, at others, it certainly wasn't pretty, but a massive scalp in the capital re-opens their five-point Premier League lead as Liverpool impressively made it six wins from six. The most tense of finales was overcome as the Reds held firm against huge pressure from their hosts to make it 15 consecutive wins in the top flight. This, then, was a hugely welcomed result and performance that more than hinted at a change in circumstance this term. Make no mistake, this was a display that is the stuff of champions. Even allowing for a nerve-shredding last 10 minutes. In seasons previous, the goal for the Blues would have signaled a Liverpool crumble, but this side is made of sterner stuff. They simply refused to wilt with Joel Matip and Virgil van Dijk in particular thriving. Chelsea fought until the death but the sight of Robertson winning the ball and racing 60 yards up the pitch to win a free-kick was celebrated like a goal from the away end. The 100 per cent record is intact and the five-point lead is back. Liverpool brushed off Manchester City's 8-0 win over Watford on Saturday with their own title statement.

Consider this a statement from Liverpool. On a weekend where Manchester City scored eight, the Reds recorded what could, in the grand scheme of things, be just as significant a victory. Their 2-1 win over Chelsea at Stamford Bridge restores their five-point cushion at the top of the Premier League. That’s seven successive away league wins for Jürgen Klopp’s side – a new club record. They’ve won their last 15, home and away, and are on their best unbeaten run, 23 games, since 1990. We know what happened that year, of course, and the desire to end that torturous wait for a league championship burns as fiercely as it ever has. Results like this, though, only reinforce the idea that perhaps, just perhaps, this really will be Liverpool’s year. Since the start of last season, Liverpool have scored 34 goals from set-piece situations, which is at least seven more than any other team. They really have developed into the complete football team. They look like they have all the tools. In terms of fluency and quality, they can play a lot better. In terms of results, though, they can’t.

Alisson Becker’s return from the injury he sustained against Norwich will still represent a boost, but his stand-in has shown just how shrewd the Reds were to sign him up in the games since. Adrian was hugely impressive yet again here, with his one-on-one save from Tammy Abraham the highlight of another strong showing between the sticks. Ultimately, that stop earned the visitors all three points and, though their No.13 will likely be out of the team by then, that could prove crucial when the points are counted up come May.

No-one should underestimate the sheer brilliance and resilience of Manchester City, not only in responding to defeat at Norwich by thrashing Watford but also the manner in which they overhauled and then stayed ahead of Liverpool last season. What is telling, however, is that Liverpool's Champions League win appears to have sharpened their appetite for success and trophies not sated it. The Premier League is now their avowed mission. They have shown themselves capable of different types of victories and this was one of the less eye-catching variety, but equally precious and offering Klopp a look at another face of his team. Liverpool were nowhere near their best but it is one of the great old adages of a Premier League title-winning season that the key to success is winning on exactly those occasions. And, as a bonus, Liverpool are also capable of scoring different types of goals.