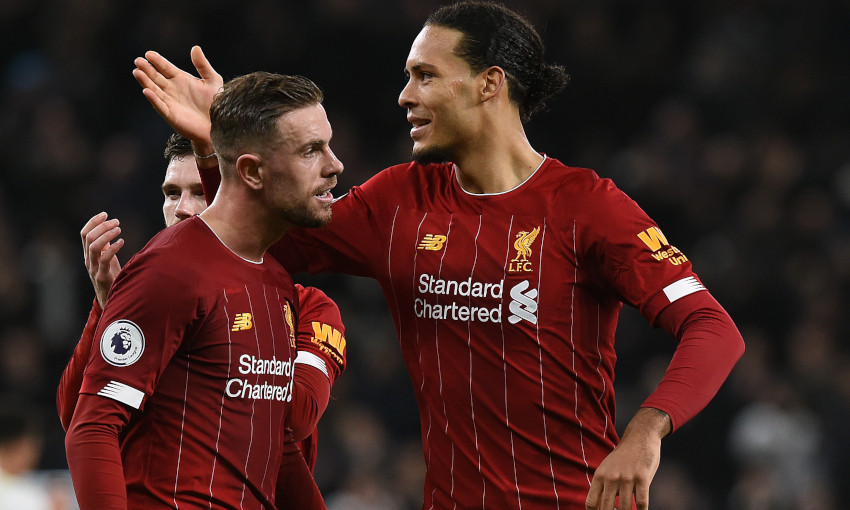 Liverpool increased their lead at the top of the Premier League to 16 points with a 1-0 win away at Tottenham Hotspur on Saturday evening.

Roberto Firmino netted the only goal of the game as the Reds got the better of Jose Mourinho's side.

Saturday night at the Tottenham Hotspur Stadium and Liverpool served up a public service announcement. The only script they are interested in reading from is the one in which they decide their own destiny, ending a three-decade wait for the title. Firmino’s decisive goal ensured Jurgen Klopp’s side recorded the best start to a campaign of any team in the history of Europe’s top five leagues with a staggering tally of 61 points from 21 matches. It was also a new benchmark haul of 104 over a rolling 38-game period in the division. If you are searching for the secrets to why Liverpool are 16 points clear at the summit with a game in hand, this refusal to be comfortable and get complacent is a solid starting point. The world champions were dominant for 60 minutes in north London, then dug in. Heung-Min Son and Giovani Lo Celso snatched at and spurned glorious chances late on, but the gulf in class between these teams – Champions League finalists in June – was reflected for the most part.

The celebrations which greeted the final whistle told their own story. The record breakers roll on. This relentless, remarkable Liverpool team continues to write its name into football history. Victory over Tottenham – narrow but crucial – ensures the Reds have now officially made the best ever start to an English top-flight season. In fact, their record, 20 wins and a draw from 21 matches, is unmatched across any of Europe’s top five leagues. Incredible. This was another hurdle cleared, a huge one in their quest for a Premier League title. It was endurance rather than enjoyment at times, but when referee Martin Atkinson brought an end to proceedings, it was the men in red who were smiling. This win, coupled with Leicester’s surprise home defeat to Southampton earlier in the day, leaves Jurgen Klopp’s men 16 points clear at the top of the table. Yep, incredible.

Of course, Jürgen Klopp’s men can only truly spell out their greatness by lifting the Premier League title this term, but the greatest start to a league season ever seen in this country is not a bad start. After doing their bit in keeping things tight until the 70th minute, Spurs did their best to earn a share of the spoils through a late assault on the Liverpool goal. The hosts worked a number of presentable shooting opportunities, most notably the one missed by Lo Celso from a delicious cross to the back post. But it is the efforts on target that truly killed any hopes Tottenham might have had of getting back into the game. As he so often does, Alisson Becker refused to give the opposition a sniff as he held on to every single shot that came in his direction in a manner rarely seen even at this level. The Brazilian’s handling is simply world class, and that proved crucial to his team getting three points on board in this one.

The league leaders were handed more motivation to their already ample stock when Southampton fought back to beat Leicester 2-1 earlier in the day. It was a result that ensured a 16-point advantage was within grasp before kick-off. Firmino's goal arrived after the half-hour mark when he spun Tanganga with a lovely feint before rifling home with his left foot. It's now nine goals for the season for the Brazil international and while none have arrived at Anfield, the No.9 has stepped up to the plate in some big meetings away from Merseyside this term. This was another sizable one as he took full advantage of Tanganga's inexperience to sell him a dummy and fire home after Henderson and Salah had kept it alive on the edge of the box. Quite where this Liverpool side will stand among the world's greatest football teams will be a healthy debate further down the line. But while they are here in the present, Reds fans must simply rejoice. This is a special side Klopp has crafted.

The press on LFC 2-1 Spurs: 'Inspirational Henderson and immense Fabinho'

The view from Tottenham... with Friendly Fires