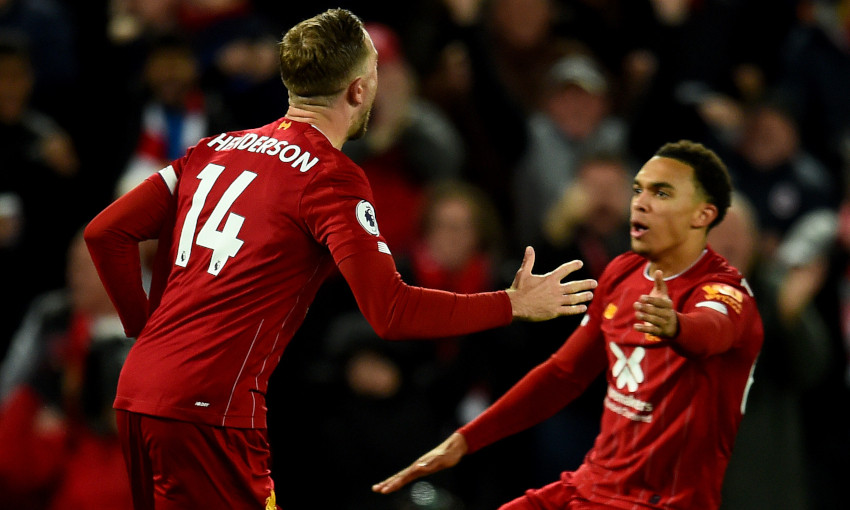 Mohamed Salah netted the winner from the penalty spot as Liverpool came from behind to secure a 2-1 win over Tottenham Hotspur at Anfield on Sunday.

Despite Harry Kane’s early strike, Jordan Henderson got the Reds level and when Sadio Mane was fouled by Serge Aurier, the Egyptian international made no mistake from 12 yards out.

The victory saw Liverpool maintain their six-point lead at the top of the Premier League table.

Spurs' advantage would quickly evaporate however as captain Henderson broke into the box undetected to steer one past Gazzaniga and break the one-man resolve in the Spurs goal in the process. Here, however, was the skipper when his team needed him most, breaking into the final third and coming up with a huge moment. If Alex Oxlade-Chamberlain's brace in midweek showed that there are goals to be unearthed in this midfield makeup, Henderson showed that it isn't just the former Arsenal man who can mine for them. More of that will be needed between now and May. The Reds skipper was excellent here, particularly in the second half as he took the fight to the visitors with grit, determination and no little quality when he it really mattered. Liverpool's tails were up and they lay siege to Gazzaniga's goal in their pursuit of the lead. Once more he denied Firmino before Wijnaldum headed straight at him. Moments later Salah couldn't quite provide the finishing touch on the majestic Fabinho's pass over the top. The Brazilian midfielder is one yellow card away from a league suspension, but he refused to let that enter his school of thought as he put in a display that was head and shoulders above everyone else in the engine room. Liverpool held on in the closing stages as they once more displayed their mental strength. What Klopp has cultivated here is something special. Beyond pure footballing ability, the German has instilled a mentality that ensures his players answer the call every time a tough question is thrown in their direction. If there is a more resilient side in world football right now, they are being well hidden. Liverpool march on, nine wins from 10, six points clear. Catch them if you can, Manchester City.

Some things are just too precious to let go of. Liverpool’s unbeaten start to the Premier League season continues, their incredible home record goes on. Their ninth league win of the campaign keeps the Reds six points clear of Manchester City at the top of the table. Spurs had led through Harry Kane’s goal, but just as in the Champions League final, they were to leave with nothing. They must be sick of the sight of those red jerseys by now. How the Kop roared. They’d watched their side fall behind inside the first minute, yet still muster the spirit, the energy and the courage for a rousing comeback. "Our mentality has improved," said Henderson afterwards. This was the sixth time this season they've won by a single goal. In fairness, had it not been for the work of Paulo Gazzaniga, the Tottenham goalkeeper, their afternoon might have been a lot more comfortable. This was among Liverpool's better performances this season. They had 21 shots, 15 of them inside the penalty area. Thirteen of them were on target. Liverpool saw it out professionally, with Fabinho immense in the middle and Alisson the calmest man in the stadium during four excruciating minutes of added time.

Having dominated the majority of the match by every statistical measure, you would be hard pushed to claim that the hosts did not merit their three points. But you don’t always get what you deserve in football and Liverpool only ensured they avoided such an outcome thanks to their barely believable reserves of mental strength. A key part of that was Henderson. His equaliser was the epitome of a captain’s goal and was supplemented by the Englishman completely running himself into the ground late on.

This was a game Henderson clutched to his chest from the first minute, the time of Tottenham’s opening goal, and didn’t let go until it had been shaped to his will, doused in his scent, and generally arm-wrestled Liverpool’s way. A 2-1 win means the leaders have now equalled the best 10-game start to a Premier League season. They did so in a way that sprang, in large part, from the captain’s pure, unrelenting will, a way of running, of hurling himself at the day that simply draws the rest of this team in his wake. Liverpool’s skipper certainly runs a lot. He ran from his knees all the way to Madrid last year. He ran Liverpool back into this wild, one-sided, entirely gripping game.

The most impressive thing was no-one ever showed any sign of doubt. Even at 1-0 down with the clock ticking down, you never really thought Liverpool would not come back and win. There is not even a murmur of discontent from the crowd, the players keep going, Klopp roars them forward and you almost wait for the inevitable. They were brilliant, they had to be to emerge victorious from a game of such high quality. Of course Liverpool were going to win because that is what they do - even when they are up against it, even when players are tired after a Champions League trip in midweek and even when a few are clearly carrying niggles. It sums up their attitude, their unshakeable belief in this season’s title race as they made it a 12 straight wins at Anfield where they have not dropped points since being held by Leicester last January. Tottenham's stand-in keeper Gazzaniga was the best player on the pitch even in defeat.

The view from Tottenham... with Friendly Fires