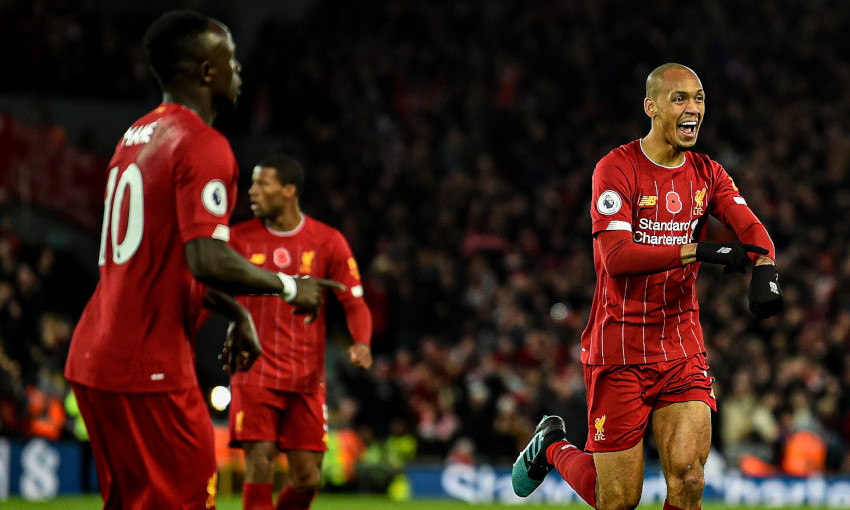 Liverpool produced a fine display to record a 3-1 victory over Manchester City at Anfield on Sunday.

The victory saw the Reds extend their lead at the top of the Premier League to eight points.

Fabinho opened the scoring with a stunning strike while Mohamed Salah added a second following a superb combination between Trent Alexander-Arnold and Andy Robertson.

Sadio Mane made it 3-0 after a brilliant cross from Jordan Henderson and although Bernardo Silva pulled a goal back it was to be Liverpool's day.

They talk of never walking alone in these parts: a celebration of togetherness, a trait that defines this special collection of men in red. They are bonded by a crest, a community, a captain in Henderson who keeps challenging teammates to strive for the heights, and a charismatic manager in Jürgen Klopp whose emotional response to a game’s ebb and flow invigorates his players further. So much of Liverpool’s prodigious work is rooted in sports science, in ensuring their peak conditioning, and in their tactical approach, raiding rapidly, switching play and crossing. It is something deeper, too, more visceral. Liverpool players are running on adrenaline. Players, supporters and manager share this dream of a first title since 1990 and all at Anfield yesterday could not escape the stirring evidence of a team on a mission. Everyone present, or tuning in, was privileged to witness a classic. This was Premier League football at its intoxicating best, fast and furious, skill at speed, and Liverpool embodied it best. Klopp’s side look best equipped to last the course, not simply because of their healthy eight-point lead, and medical staff’s ability to keep players fit, but because it is in their hearts. Emotion is so often central to the narrative at Anfield.

The big game got the big performance required. And for Liverpool, the biggest of three points, and the biggest step towards ending that long wait for a Premier League title. Jürgen Klopp would have dreamt it like this last night. His team had been asked the question, could they deliver when the lights shone bright? Could they stare down Manchester City, the champions, the record-breakers, the treble winners? They could. The Reds’ 3-1 win takes them nine points clear of Pep Guardiola’s side, who once more found Anfield a hurdle they just couldn’t clear. City, the great City, had no answers. They remain fourth in the table. Leicester and Chelsea, for now, are Liverpool's nearest challengers. Even those two are eight points adrift. Their 11th league win of the season was by far their best, a triumph of grit, aggression and clinical finishing. The concentration levels shown, from start to finish, were astounding. Klopp had urged everyone, including the hot-dog sellers, to play their part in making City’s life as uncomfortable as possible. He got his wish. His fans were noisy, his team were wired. Anfield crackled, it booed and it roared. Liverpool’s players responded. Fabinho, meanwhile, has established himself as one of Klopp’s big players

It was this reverse fixture earlier this year when the influential Fabinho was left on the bench before his introduction began to get the Reds ticking. Since that game, his importance to this Liverpool side has only grown and grown. Now one of the first names on Klopp's team sheet, the former Monaco man has been a revelation. The final whistle was greeted with a huge cheer from every corner as the three points were confirmed. It is now 13 points from a possible 15 against the rest of last season's top six. City, in the sharpest of contrasts, have picked up one from games with the Reds and Tottenham. "We are the champions, champions of Europe," boomed the Kop as the three points came into full view. Maybe, just maybe, those lyrics will be tweaked next season.

Had you studied the countless combined XIs put together in the build-up to this game, you would not have found many instances of a Liverpool midfielder featuring. Manchester City possess an enviable wealth of talent in that position that makes them far superior on paper - unfortunately for them, football is played on grass. Here, the Reds’ less glamorous trio of Georginio Wijnaldum, Fabinho and Henderson dominated, not through possession - as City might have - but sheer intelligence. The visitors simply could not cope with Liverpool’s press, or their midfield triumvirate’s underrated knack of getting the ball into advanced positions through either driving runs or fizzed passes. Liverpool’s engine room will probably continue to be unfairly maligned by pundits, but today’s result and indeed the league table is proof of just how wide of the mark most of those assessments are. Speaking of unfairly maligned, how about Dejan Lovren’s performance? The 30-year-old saved his best performance since returning to the starting XI for today, shutting down Sergio Aguero with an impressive showing of front-foot defending. Matip is scheduled to return following the upcoming international break but, with Lovren playing like this, he may well face a battle to earn his place back.

Anfield was rocking, shaking with excitement and anticipation. Klopp’s men have the momentum, the belief and the overwhelming confidence that this, finally, will be their year as it felt like a seismic power shift in the title race. Liverpool are the team to beat while City are now big underdogs. Liverpool just have this wonderful winning habit, they look unstoppable and, in the power of Anfield, they have perhaps the biggest weapon of all. This was their 13th consecutive Premier League win at Anfield. Liverpool had an edge in most departments. Fabinho was man of the match as he ran midfield and arguably the game. Liverpool were ruthless with their finishing while City were wasteful.