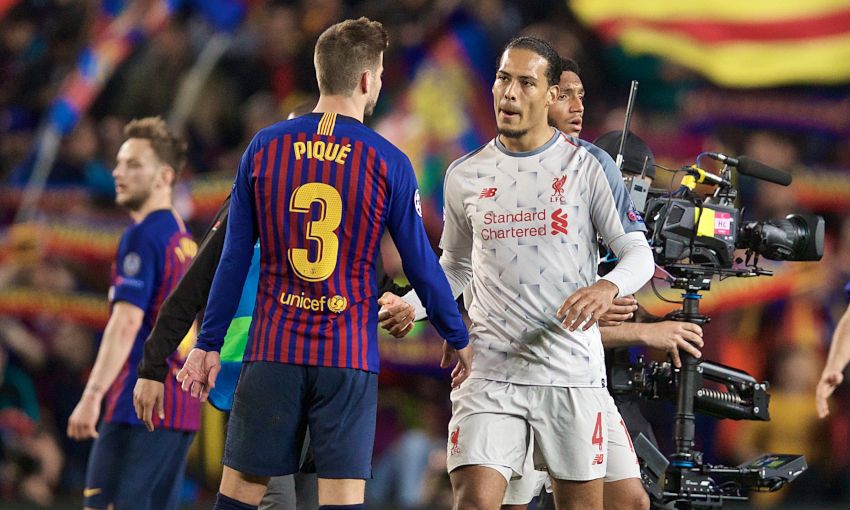 A formidable Liverpool performance is required tomorrow evening at Anfield as Jürgen Klopp's side strive to overturn a 3-0 deficit in the second leg of their Champions League semi-final with Barcelona.

Six days on from a Camp Nou clash that was much more even than the scoresheet – showing one goal for Luis Suarez and two for Lionel Messi – suggested, they meet again for the right to contest the final in Madrid next month.

After picking out three key battles for last week’s first match, we have chosen three different duels that could be pivotal to the outcome of this game and the tie…

The Senegal international was on target at least once in every single previous Champions League knockout tie Liverpool played last season and this – as well as against Real Madrid in the 2018 final.

With Roberto Firmino ruled out of the return with Barcelona due to injury and Mohamed Salah’s availability uncertain after the head injury he sustained at St. James’ Park on Saturday, much attacking responsibility will lay on Mane’s shoulders.

It bodes well, then, that he has scored seven goals in his past six outings at Anfield – including two in the 5-0 rout of Huddersfield Town last time out.

Whether the No.10, who has 24 strikes overall this term, is deployed in his usual left-sided position or switched into a more central role, he must get the better of Gerard Pique if the Reds are to chip away at their aggregate deficit.

A three-time Champions League winner with Barcelona, Pique has established himself as one of Europe’s most accomplished centre-halves since leaving Manchester United back in 2008 aged 21.

Now 32, the Spanish international is integral to his team’s approach with his refined style and confident use of the ball; his 90.9 per cent passing accuracy and 66 total passes were bettered only by teammate Sergio Busquets last Wednesday.

The Brazil midfielder executed a superbly-timed tackle on Messi in the build-up to Barcelona’s second goal only to see the ball wind up in the net anyway via Suarez’s knee, the crossbar and eventually Messi’s left boot.

Soon after, the No.3 was penalised for a foul after a collision with Messi and the Argentinian promptly slammed the subsequent free-kick into Alisson Becker’s top corner from 30 yards.

Those luckless moments aside, though, it was another assured showing by Fabinho, who started only one of the Reds’ Champions League group-stage games but has gone on to play all but 13 minutes of the five knockout fixtures so far.

He registered a team-high 46 passes in the opposition half at Camp Nou so the emphasis will be on him to maintain that composure back home in front of the Kop while also disrupting Barca’s rhythm in possession.

As they demonstrated in their 1-0 win over Manchester United last month at Old Trafford – where they scored in the 12th minute then saw the game out with 66 per cent possession – under Ernesto Valverde, Barcelona are now just as adept at taking the sting out of a match and sitting on a lead as they are slicing teams open.

And key to that passing style is Croatia international Ivan Rakitic.

The midfield all-rounder has started all 11 Champions League fixtures this season, spending 941 minutes on the pitch in total during which he has demonstrated the full range of his skillset.

In the Barca squad, only Busquets can better his numbers for passes attempted (863), passes completed (801) and distance covered (111km) in the competition.

“We want to be in the final in Madrid,” Rakitic commented before the first leg against Liverpool. “We know the last few years haven’t been great for us in this tournament, so we want to get there this year.”

So prolific in his three-and-a-half years as a Liverpool player before transferring to Barcelona, Suarez was always likely to play a prominent role in this tie and certainly made his mark in the opening leg, scoring the first goal and inadvertently setting up the second.

The Uruguayan’s hard-running performance on and off the ball at Camp Nou belied his status as the oldest member of Valverde’s starting XI.

Surprisingly, the 32-year-old had failed to find the scoresheet in eight prior Champions League appearances this term but put that right when he snuck in behind the Reds defence to apply a deft finish to Jordi Alba’s low cross in the 26th minute.

The 2018-19 PFA Players’ Player of the Year, Virgil van Dijk, will be keen to ensure there’s no repeat at Anfield and will also have to be wary of Suarez’s pressing when making his trademark runs out with the ball to get Liverpool on the front foot.

“We’re disappointed by the result on the scoresheet because I don’t think it says how the game was really,” said the Dutchman in the aftermath at Camp Nou.

“Obviously it’s 3-0 now and there’s a big job to do over at Anfield but we have shown throughout the season that we never give up so we have to just believe. We need everyone and we’ll see how it goes.”

Having notched a sixth goal of the season in Saturday’s 3-2 victory at Newcastle United, the Liverpool No.4 will hope to be a threat at the other end too.

Two of those contributions have come in Europe – clinical headers against Bayern Munich and FC Porto – and that set-piece threat could prove a valuable weapon against a Barcelona backline that has conceded only six goals in 11 Champions League outings.