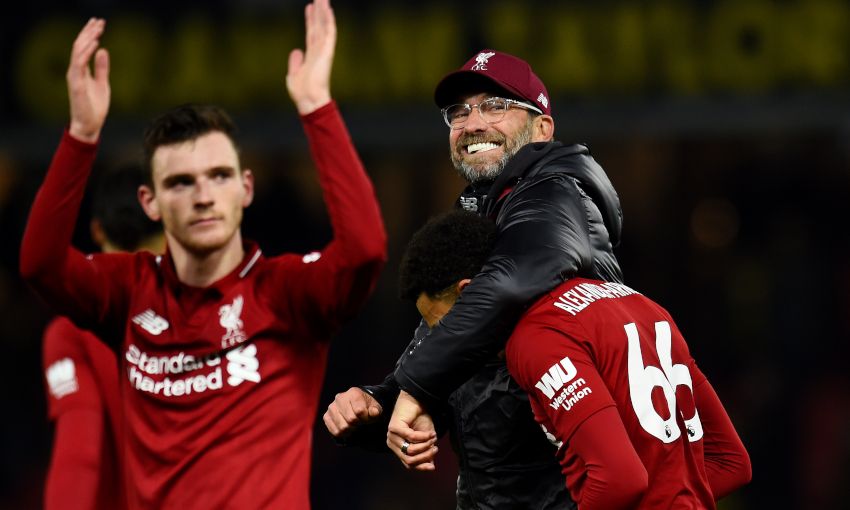 Liverpool kept up the pressure at the top of the Premier League with a 3-0 win over Watford at Vicarage Road on Saturday.

Mohamed Salah opened the scoring, Trent Alexander-Arnold added a wonderful free-kick and Roberto Firmino made certain of the win with a late goal.

Liverpool’s ultimate ambition is to overtake Manchester City, but for the moment they are excelling in the weighty task of stalking them. News of City plundering goals in East London was filtering through to Vicarage Road, the sighs audible in the away end when confirmation was provided at half-time by Watford’s announcer. Rather than a chilly November with a challenger seeking to manoeuvre their way into position, it felt Liverpool were in the closing straight in spring – playing to prevent another Pep procession. That made what followed more impressive, Liverpool scoring three in the second half to first eke out and then gallop to victory. Jürgen Klopp’s men were toiling for a break before Mohamed Salah’s volley turned the game on 69 minutes. Not that they played with anxiety. The patience and maturity made the second half their most complete showing this season. Liverpool are becoming accustomed to afternoons where grinders shine as much as artists. This time the former facilitated the latter. Salah, Roberto Firmino and Sadio Mane thrived in the latter stages – the Brazilian heading the third after youngster Alexander-Arnold’s sublime free-kick doubled the advantage. The foundations were laid by defensive fortitude. Virgil Van Dijk was again exemplary, as was Dejan Lovren who returned for the injured Joe Gomez.

Alexander-Arnold was lifted clean off his feet. Alisson Becker had to settle for a bear hug. The manner in which a beaming Klopp marched on to the turf to embrace his Liverpool players after the final whistle laid bare the significance of the outcome. A trip laced with danger on the back of the international break had been successfully negotiated. On a gloomy, cold and wet afternoon at Vicarage Road the Reds dug deep and delivered. Liverpool's Premier League title challenge remains firmly on track after an ultimately emphatic victory over Watford. They remain in hot pursuit of Manchester City and this is the kind of gutsy triumph which will fuel the belief that Klopp's men can truly go the distance. For over an hour, it was an almighty scrap. But in the final quarter Liverpool raised the bar and blew the Hornets away. With just five goals conceded, it's the fewest Liverpool have ever shipped after 13 matches of a league season. This is also now the club's best ever start to a Premier League campaign with 33 points out of a possible 39. It just doesn't feel like it because the Reds still find themselves looking up at City, who routed West Ham 4-0 and remain two points clear. But this isn't the time to feel disheartened. There's a long way to go and Liverpool are right in the mix. Imagine how Pep Guardiola feels. City have started like a train but they haven't shaken the Reds off.

Make no mistake, Klopp has constructed an impressive, serious team - the latter fact perhaps best shown by their mature performance following Jordan Henderson’s late dismissal. The excellence of other sides will be a determining factor in whether that is rewarded with silverware, of course, but it will never subtract from the ecstasy in the away end during a 3-0 win on the road. Lovren continues to prove himself a valuable option for the Reds. With Gomez out after taking a kick on the ankle in training, Lovren returned to partner van Dijk at the heart of the Reds’ defence. This is a centre-back duo that helped their team to a Champions League final last season, and they never looked truly under threat from a physical Watford frontline. Although it isn’t expected, supporters should not worry too much if Gomez fails to return in time to face Paris Saint-Germain in midweek - a worthy deputy is ready.

What do they say: cometh the hour, cometh the man? He’s scored better goals, Salah. On bigger stages and in better performances, too. For Liverpool, though, the Egyptian’s latest strike was a priceless one. It opened a door that had looked set to remain locked; it gave his side a platform from which to record yet another Premier League victory. It keeps the Reds on the heels of Manchester City at the top of the table. Watford away was a tricky way to start, in Jurgen Klopp’s words, “the most intense period of the season” but Liverpool got the job done here. Again. The records continue to tumble. This is officially the best ever start, defensively, that Liverpool have made to a league season. A backline which has conceded just five goals from 13 games will always give them a chance to win when below their best. Here, we got the perfect example. Watford battled and grafted, but they were hardly given a sniff by van Dijk & Co.

The press on LFC 2-0 Watford: 'Gomez ready to make up for lost time'

The media on LFC 5-0 Watford: 'A statement victory'