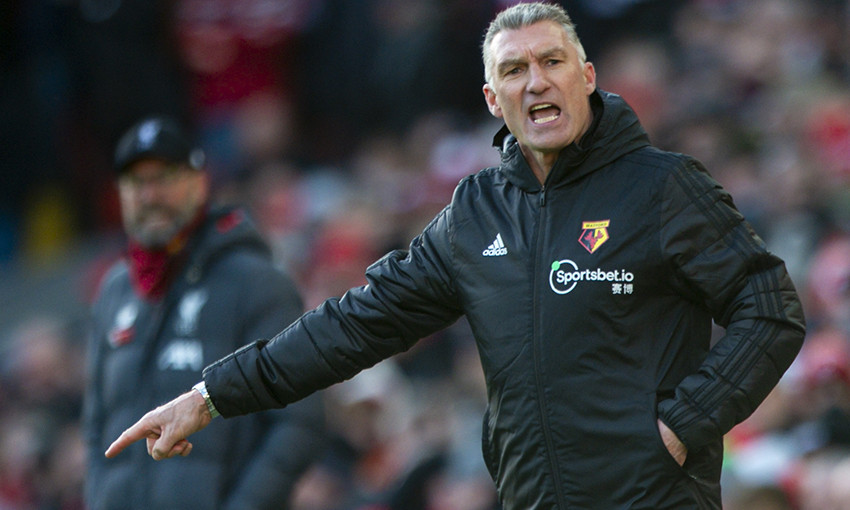 Liverpool travel to Vicarage Road on Saturday as the Premier League leaders take on a Watford outfit battling against the drop.

Nigel Pearson succeeded Quique Sanchez Flores in December and has won four and drawn three of his 11 Premier League games in charge to take the Hornets within one point of safety.

But what can we expect this time around? We spoke to Watford season ticket holder and From the Rookery End podcast co-presenter Mike Parkin (@RookeryMike) to find out...

We last spoke ahead of Pearson's debut as Watford manager - so, how does your report card since then read?

Pearson had an immediate effect, with his first game in charge an impressive performance at, of all places, Anfield. The Hornets ended up losing 2-0 but created plenty of opportunities in what was a creditable showing. A good run of form followed with eye-catching wins against Manchester United and Wolves, but the last month has seen the tide turning again, with glorious chances for wins against Spurs, Villa, Everton and Brighton all spurned in quick succession.

Despite the recent frustrating run of form, Pearson’s Watford look markedly more equipped to fight relegation than they did under Javi Gracia and Sanchez Flores earlier in the season, and he’s doing well in difficult circumstances. The supporters, as they will need to be if the club is to battle their way out of danger, are behind him and with some key players returning from injury, it’s hoped that he can cast his survival spell once more, this time over Vicarage Road.

Has the Hornets boss settled on a preferred formation, style and approach?

He seems to have settled on a 4-3-3 approach, with Troy Deeney as the lone striker, supported by two wide men; the mercurial Gerard Deulofeu on the left and Ismaila Sarr (when fit) or Roberto Pereyra on the right. He’s been somewhat hamstrung by injuries, Watford have been without a recognised right-back for some time. The biggest issue, however, has been the prolonged absence of explosive winger Ismaila Sarr – by far and away Watford’s most exciting player, his absence has coincided with a tough run of form.

Is there a key player who has emerged during Pearson's tenure?

Deulofeu has been a man reborn under Pearson. He’s shown tenacity and focus and is contributing more on a regular basis. The stand-out performer however, despite a recent lay-off, is the Senegalese winger Sarr. He has electric pace, enough to concern even the most consummate of defenders, and the entire dynamic of Watford’s shape and performance changes when he’s involved. His quick return to fitness and form is absolutely key to Watford’s survival hopes.

What positives can you take from the defeat at Old Trafford last week?

Watford were competitive for large parts of the game, creating a decent chance early on and having an equaliser chalked off by VAR. This Watford squad is a decent one and don’t often look out of place regardless of opposition and Sunday’s trip to Old Trafford was no different. They are guilty of doing the hard work and not capitalising, though, and this was in evidence against Manchester United. 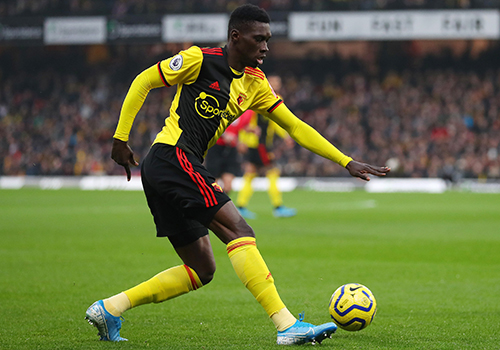 Sarr returned to action in that game - will he feature against Liverpool?

Sarr is going to be pivotal to Watford’s fight against the drop. His pace is quite extraordinary, and his marauding runs down the right have been a key part of the Hornets’ successes under Pearson. He’s still young and relatively inexperienced, but before his injury his confidence was growing exponentially, as was his threat to the opposition. He’s one of the most exciting players to have donned the yellow shirt in recent memory and Watford fans will be desperate to see him against Liverpool - and hopefully many Premier League fixtures to come.

Pearson played centre-back Craig Dawson at right-back against United - was that just a one-off?

With both Daryl Janmaat and Kiko Femenia injured, Pearson has been forced to be creative when filling the right-back slot. Dawson replaced Adrian Mariappa, another centre-back, in the role at Old Trafford, but it’s hoped that the nimble and pacy Femenia will be fit to return to the side for the visit of Liverpool.

How's the Hornets' home form been under Pearson?

The last home game was the gut-wrenching tussle with Everton, a game Watford led 2-0 only to lose 2-3, conceding with virtually the final kick of the match. Up until the visit of the Toffees, Watford were unbeaten at home under Pearson, recording memorable wins against Man United and Wolves while narrowly missing out on a home win against Spurs - a Troy Deeney missed penalty meaning the game ended scoreless.

Where will Watford's main threat come on Saturday?

Watford boast two of the best midfielders in the division in Etienne Capoue and Abdoulaye Doucoure, with both capable of claiming a foothold for their team in any game. If they play well, Watford play well, so both will need to fire if the Hornets are to remain competitive against Liverpool. The same applies to the performance of Deulofeu. On his day he can be unplayable.

The man most will be pinning their hopes on is a youngster that I’ve already mentioned countless times - Sarr. His pace means that defenders have a different question to answer when he’s on the pitch, often creating opportunities for other attack-minded colleagues by virtue of his perceived threat alone. If Pearson’s men are to pull off an unexpected result against the Reds, it’s a pretty safe bet that Sarr will be at the heart of it. 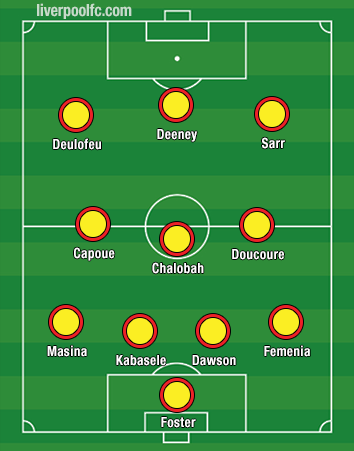 Liverpool have exceptional quality all over the pitch, so matching them in any department will be a huge challenge. Central midfield will be an intriguing battleground with neither Capoue nor Doucoure backward in coming forward. They will be looking to stamp their authority in that area, protecting the defence and potentially help to set up counter-attacks through Deulofeu and Sarr.

Finally, what's your prediction for the match?

A few of Watford’s recent encounters with Liverpool have been watch-behind-the-sofa affairs, with the Reds running rampant more times than I care to remember. That said, we’ve all seen enough football to know that unexpected results can come when we least expect them, so I’m going to suggest a 2-0 home win.