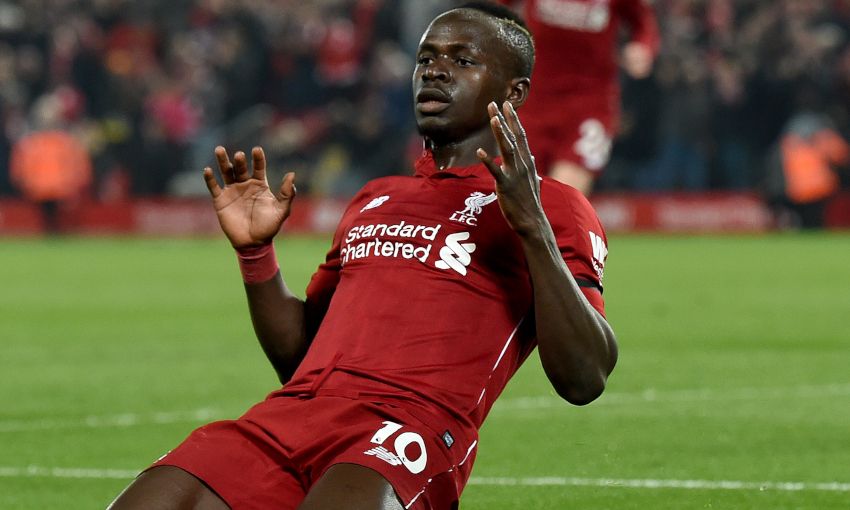 Liverpool produced a brilliant attacking display as they put Watford to the sword with a 5-0 win at Anfield on Wednesday night.

Sadio Mane and Virgil van Dijk both netted twice while Divock Origi was also on the mark.

This was a statement victory. This was Liverpool back with a bang. Jürgen Klopp's side bared their teeth in the Premier League title race as Watford were dismantled on a rousing night at Anfield. All the anxiety, all the nerves and all the pressure was swept aside as the Reds produced their most complete performance of 2019. No wonder Klopp was throwing fist pumps towards the Kop after the final whistle. To a man, Liverpool delivered. They were immense in all departments. Their lead at the top remains just a single point after Manchester City's narrow win over West Ham, but Liverpool won't need to worry about anyone else if they maintain these standards during the final 10 matches. Liverpool made light of having to do without the injured Roberto Firmino for the first time since November 2017. The decision to play Mane as a central striker proved inspired as he sparkled throughout. With 14 Premier League goals under his belt, he's enjoying his best ever top-flight campaign. Origi repaid Klopp's faith with a fine shift out on the left and James Milner did likewise after being preferred to both Jordan Henderson and Naby Keita in midfield. Fabinho goes from strength to strength and Trent Alexander-Arnold enjoyed a remarkable return to action after being rested at the weekend. On the night the Academy graduate was finally granted his own song by the Kop, he celebrated a hat-trick of assists. Andy Robertson created the other two as the Reds' full-backs ran riot.

Nerves? What nerves? If Liverpool are feeling the pressure of leading the Premier League, it didn’t show here. Watford, who arrived as a team in form, were simply swept away by the Red wave which awaited them as Liverpool, to the delight of their supporters, rediscovered the attacking spark which makes them one of the most dangerous sides around. Mane came to the party in a big way here. Pressed into action as a central striker in the absence of Roberto Firmino, the Senegalese star delivered for his manager. His two first-half goals, both wonderfully taken, settled any residual nerves among the home fans. His performance – aggressive, confident, direct – was that of a man with a point to prove. Prove it he did. He has six goals in his last seven appearances now, Mane, and 15 for the season. With 14 league strikes, this is now his most productive Premier League scoring campaign. The standing ovation he got when replaced late on by Adam Lallana was richly deserved.

If it has ever been lost, this was a night when Liverpool rediscovered their swagger , when they looked like a team too good to crack under pressure. If Mane’s first was gloriously conventional, his second was magnificently freakish. A poor first touch when collecting another Alexander-Arnold invitation almost put him back into his own half, hence the collective double-take when he sent a backheeled strike into the turf and up over Ben Foster. It was the sort of exhilarating moment that has been scarce for Liverpool in recent weeks and no surprise it was provided by Mane. If he started out as a standard central striker here, it did not last for long. His unorthodoxy, sharpness and appetite for work was simply too much for Watford to handle. This was Mane, Mo Salah and Liverpool at their dizzyingly irresistible. Alexander-Arnold brings a verve to this Liverpool team that has taken it to the top. He brings a confidence to it. That was the important thing for Klopp and his team here - rediscovering the self-assurance that has characterised so much of their season.

After a run of three draws in their past four league games, Klopp's team blew away the title tension and restored belief and hope of a first championship since 1990 by recording their biggest win of the season against Javi Gracia's Hornets. But against Watford, they set the benchmark for what they must do against the likes of Cardiff, Huddersfield, Fulham and Everton in the coming weeks: Don't allow the opposition to get a foothold in the game, knock them over early, and be ruthless when it comes to finishing them off. Winning ugly is as important as winning with style in a title run-in, but Liverpool really needed to win with style after their recent run, and they accomplished that and more vs. Watford. With only Tottenham and Chelsea to play from within the top six - both at home - the signs are pointing to a Liverpool title if they can treat the rest of their opponents with the same clinical fashion with which they dealt with Watford.

The press on LFC 2-0 Watford: 'Gomez ready to make up for lost time'

The view from Watford: 'Midfield battle is absolutely crucial'