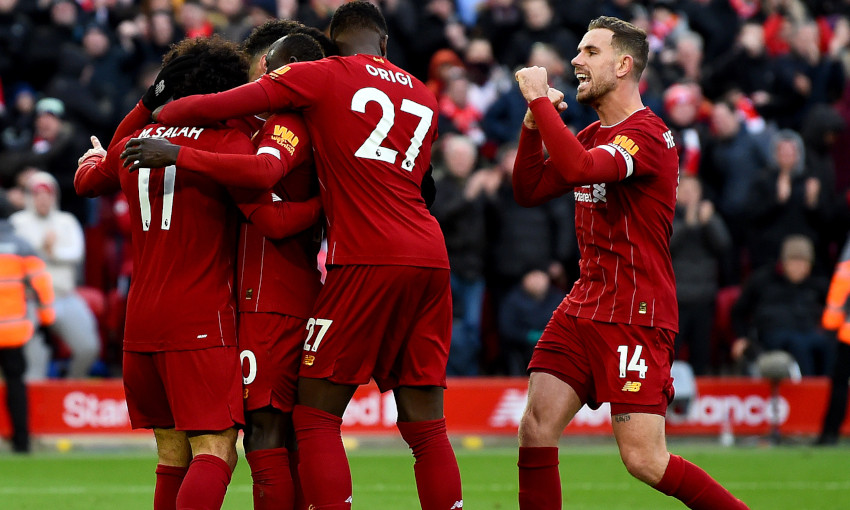 Mohamed Salah netted twice as Liverpool moved 10 points clear at the top of the Premier League following a 2-0 win over Watford at Anfield on Saturday.

Liverpool were in charge from the 38th minute, when Salah whipped a shot with the trajectory of a boomerang into the Anfield Road net; it was a strike that took the wind out of Watford’s sails. There is an argument to say, however, the most important action in this contest came 60 seconds earlier. Watford, full of spirit and determination, threatened and a careful move ended with Gerard Deulofeu seizing on Abdoulaye Doucoure’s scuffed shot. As Deulofeu shaped to shoot, Joe Gomez arrived on the scene, hurling himself in front of the Spaniard to force a corner. His timing was impeccable – a goal at that point for Watford would have made things interesting, with the stadium unusually quiet, but Gomez’s desire was crucial. In the second half, when Liverpool were protecting Salah’s goal, Gomez made a perfectly-timed tackle to stop Ismail Sarr dead in his tracks, a challenge that was greeted with thunderous applause from the stands and a punch of the air from Klopp. He always knew it would be a case of staying prepared for when the big opportunity arrived: now Gomez is ready to make up for lost time.

Two marvellous Salah finishes, one in each half, ensured the Reds march on. At the other end a resolute defensive display, led by the brilliant Alisson and the impressive Gomez, secured a third clean sheet in a row. Mane might have settled nerves with a second early in the second period, only for VAR to find him offside by the width of a fingernail. Eventually the nerves were settled by Salah, reacting brilliantly to divert substitute Divock Origi’s mis-hit shot home in the final minute. That’s four in three now for him, he’s finding his scoring touch at exactly the right time.

It wasn't pretty, but once again Liverpool got the job done. Jürgen Klopp's side have made Anfield a fortress and it was clear from the start that they were going to dominate possession and break Watford down. The Reds were made to work for their victory though - goalkeeper Alisson making smart saves after the break, while Watford's Ismaila Sarr also wasted a huge chance. Salah squandered opportunities of his own too, but Liverpool did enough to pick up their 16th victory of the season and open up a 10-point gap at the top, with second-placed Leicester being held at home by Norwich later on Saturday. The European champions, who are chasing a first league title in 30 years, were carrying winning momentum and victory here at Anfield leaves them heading into the new year with a healthy lead at the top of the table.

In the midst of such a hectic schedule, still competing on five fronts, the Reds cannot play with the same intensity as midweek in every game. It wasn't pretty, but the visit of the bottom-placed team represented nothing more than another banana skin that needed to be sidestepped. For any detractors, consider these statistics. Liverpool have now won their last 16 home league games, their second best such run ever, and have scored 42 goals in their opening 17 league matches – equalling their highest number since returning to the top flight in 1962. And Klopp's side they have won 76 of the last 78 points on offer, extending their club record unbeaten top-flight record to 34 games. The only thing bouncing come full-time was the Kop. The juggernaut goes on.

The media on LFC 5-0 Watford: 'A statement victory'

The view from Watford: 'Midfield battle is absolutely crucial'