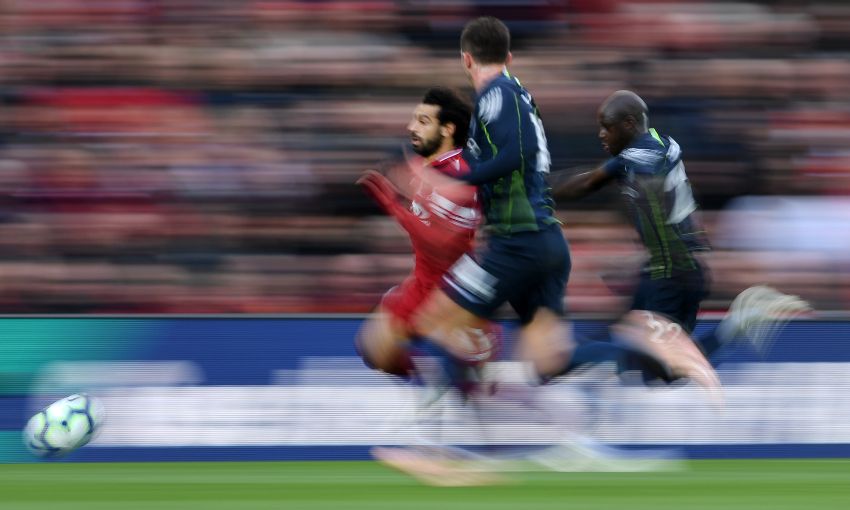 Liverpool played out a goalless draw with Manchester City in Sunday's Premier League encounter at Anfield.

Riyad Mahrez had a golden chance to claim the three points for the away side but his late penalty sailed over the bar as both defences came out on top.

Here's the media's view on the match...

A fixture usually so entrancing, with a history of leaving the audience breathless and burning for more, morphed into something entirely different. Manchester City’s visit to Liverpool was poetically described as “title defenders against title contenders” by Pep Guardiola and the manner in which both teams played as though they dared not lose gave the greatest credence to that billing. The respect shown to Jürgen Klopp’s charges by the current champions, in particular, was spotlighted on a Sunday that wasn’t so much super, but stifling. City worked tirelessly to slow the game with extra passes, exerting their energy to shut down Liverpool’s rapid transitions and opportunities to counter. That left them little in the tank to trouble in the final third, but that was not of paramount importance. Guardiola did not want his side to be undone by the bloodying red attacking blurs that have come to define and decide these fixtures and admitted he intended to oversee a match of attrition rather than attacking splendour. The comments from City and the honesty over their approach underscores Liverpool’s elevation under Klopp, who celebrates his third anniversary on Merseyside this Monday. They are now genuinely title contenders - albeit with a lot of improvement still to ensure - and are treated as such. Virgil van Dijk is, as per Glenn Murray and Troy Deeney’s estimation, the standout central defender in England. Behind him, Alisson has been nothing short of a game-changer, while Joe Gomez has excelled and Dejan Lovren was a man-of-the-match contender against City with Andy Robertson not offering Mahrez an inch.

City were presented with a golden opportunity to end their 15-year wait for a victory at Anfield when van Dijk tripped substitute Leroy Sane in the box. However, Mahrez blazed the penalty over the bar and Liverpool's unbeaten Premier League record remained intact. In truth they deserved that slice of luck. A point apiece was the right result. Neither team did enough to merit anything more. Fatigue undoubtedly played a part after a gruelling run of fixtures with both sides failing to come close to their fluent best. Respect was another factor with Pep Guardiola, who has now won just one of his last eight meetings with Klopp, clearly desperate to avoid a repeat of City's previous visit in the Champions League back in April when they were 3-0 down inside half an hour. The Spaniard, who has previously admitted to being “scared” of Liverpool's firepower, wasn't prepared to risk another mauling by leaving his backline exposed. Surprisingly, the champions were set up to contain and frustrate Klopp's side. The visitors only really threw caution to the wind in the final quarter and their tally of 51 per cent possession was their lowest in a Premier League game since Guardiola took over. Klopp got the gutsy reaction he was looking for after the Champions League defeat to Napoli in midweek. You couldn't fault the attitude and application which was epitomised by the performance of captain Jordan Henderson. Dejan Lovren wasn't far behind him as the centre-back excelled after being handed his first Premier League outing of the season. Defensive solidity and organisation has been key. This was the Reds' ninth successive home league clean sheet and they still haven't conceded in the league at Anfield since February.

Perhaps it was inevitable. Perhaps we should have expected it. In the end a contest that promised so much delivered precious little, save for Mahrez’s misguided missile. Super Sunday turned into Sleepy Sunday as the Premier League’s top two cancelled each other out on Merseyside. Last season’s classics felt a long way away as this one played out, a war of attrition as opposed to a neutral's dream. The goalless draw preserves both sides’ unbeaten league records this season, but ultimately tells us little as to the credentials of either. Both, one suspects, will be glad to have this fixture out of the way. See you at the Etihad on New Year's Day. For Liverpool the feeling will be of relief, relief at Mahrez’s miss, and at the fact that they head into the international break level on points with both City and Chelsea, having endured comfortably the tougher schedule. The Reds have now faced three of the top five sides, winning one and drawing two. Their fixture list after the international break – Huddersfield, Cardiff, Arsenal, Fulham, Watford, Everton, Burnley, Bournemouth – looks a little less daunting than the last three weeks did. This remains their best start to a campaign since 1990, though the fact remains that those seeking the free-flowing steamroller of last season have so far been left disappointed. Klopp’s side are picking up points, but they know they can get much, much better.

It's true that Gomez has struck an impressive partnership with van Dijk of his own, but Lovren and the Dutchman are at a different level. Statistically in virtually all areas – and chiefly goals conceded and clean sheets – they were the best pairing in the Premier League last season. It is why Liverpool have quietly changed their game in recent months, with Klopp subtly reducing the emphasis on 'heavy metal football', allowing his team to be more measured in their press, and perhaps save energy a little. They are at the end of a ridiculously intensive period of 7 games in 22 days against the likes of City, PSG, Chelsea and Napoli, it's true, and the tactics reflect that, but also, he is perhaps trying to save his team for a season-long title campaign. If they are to challenge the Champions, they will need more games like this, where they try to pick off opponents, and rely on the excellence of their two experienced defenders. Lovren was immense, his tackling ferocious, and van Dijk was imperious, that one apparent mistake at the end apart. It was fitting Mahrez fired over the penalty, because the Dutchman's performance didn't deserve punishment.