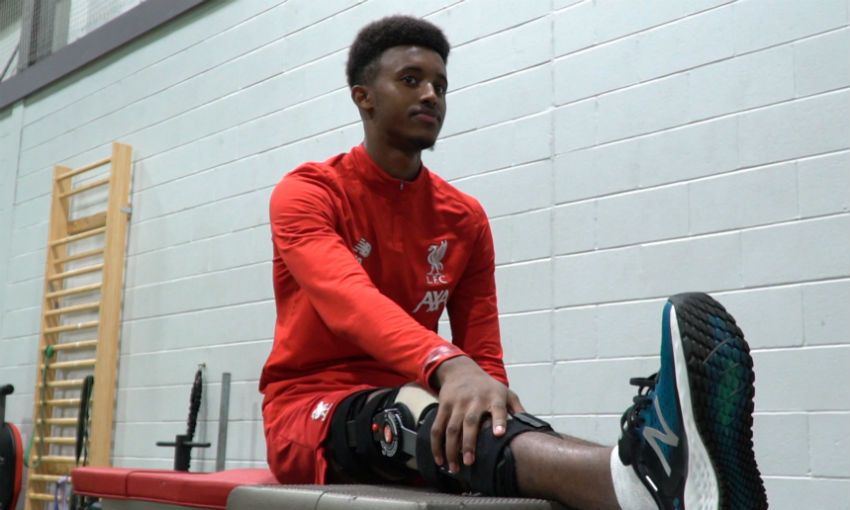 Just 27 days passed to send Abdi Sharif from the highest of all highs to months of early starts, long rehabilitation sessions, and living and sleeping in a knee brace.

He's two months into what's expected to be a nine-month road to recovery. But the 2018-19 FA Youth Cup winner is determined to view the setback as just a bump in a long and prosperous footballing career.

"Coming through it will make me 100 per cent stronger and better," he tells Neil Mellor during a chat for the latest edition of LFCTV's The Academy show.

"You have tough times. The first few weeks were tough for me because I couldn't really do anything and I was thinking, 'Why has it happened to me?'

"You've just got to get over it and think people have days where they've got worse things than this.

"Also I have quotes that motivate me in the morning. Just being patient. That's not a quote but it's a word that's important for me because you don't want to rush anything, you just want to come back 100 per cent fit."

Sharif is now the first player to arrive at the Kirkby Academy and the last to leave as he works with lead physiotherapist Paul Kelly during his rehab.

During 10 sessions across the week, he will set about with strength, range-of-motion and mobility work on his knee before then heading to the fitness department.

Those long days are made especially harder when he sees his teammates head out onto the training pitch in the build-up to a game.

"I feel a bit down because I want to be out there, I do want to be playing," Sharif admits. "But sometimes I just think in the back of my head, the better I get and stronger I get, by the time I'll be back out there it will be a lot better.

"It is tough seeing them playing. [On matchdays] obviously I want the lads to win, but there was also competition which I liked with the other players in the same position as me.

"I do want to see them doing well, but if I was out there I'd like to compete and just get my spot in the team. Obviously with my injury I can't really do that. I don't think about it that much.

"I went to watch the U23s at Anfield, it's good to see the lads play and getting the results." 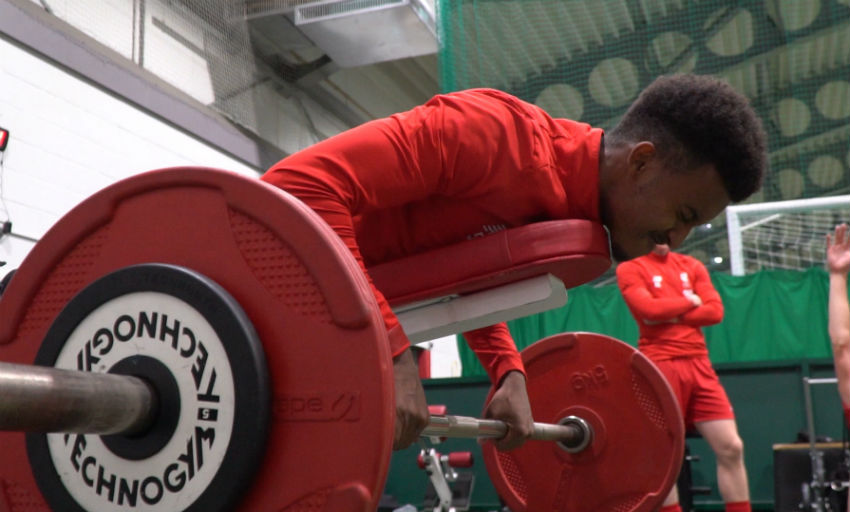 Overcoming that frustration and disappointment is an added challenge to manage when attempting to return from a long-term injury.

Sharif is managing to do so with activities outside of football and by utilising the support network the club provides, including regular sessions with performance coach Yvonne Ryan.

"She's been a big part," Sharif says. "When you're on the low side and things aren't working the way you want them to work, I go and see her.

"She'd help me out a lot and talk to me about what's not working my way, what things could you take in that would give you confidence and also the belief to go and be yourself and to go and express yourself a lot more. She's played a big part in that.

"[It's good] with Phil Roscoe [head of education and welfare] organising things for me to do outside, so I'm not always in here.

"I think that's really important for me mental-wise, just having something different to do. I've done some media training and I've also went out with the lads to watch films and that."

Further hurdles lie ahead, but Sharif's determination is clear.

"This is a bigger mental test but because I've had a few in the past, I'll manage to get back without having problems," he concludes.