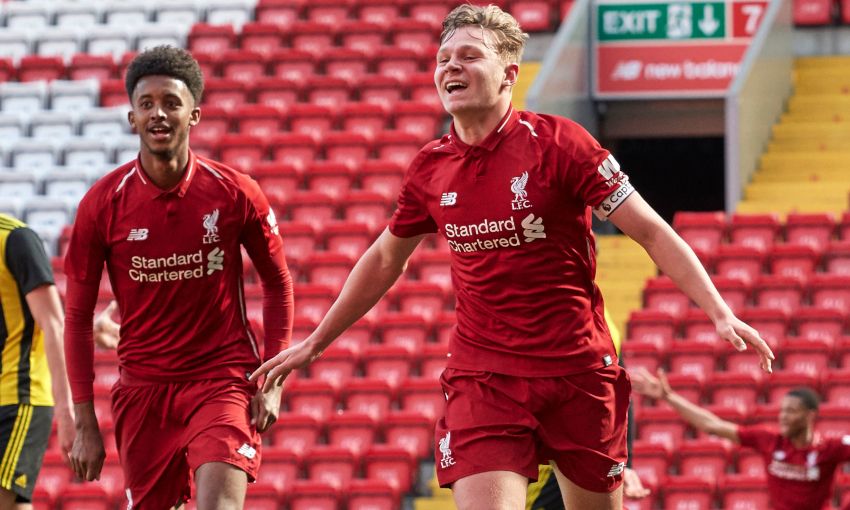 Liverpool take on Manchester City in the FA Youth Cup final on Thursday as they aim to lift the trophy for a fourth time.

Kick-off at City's Academy Stadium is at 7.45pm BST and the game will be decided on the night through extra-time and penalties if necessary.

The young Reds have overcome Portsmouth, Accrington Stanley, Wigan Athletic, Bury and Watford to reach the final, which is a repeat of the 2006 showpiece.

That year, Liverpool beat City 3-2 over two legs. After a 3-0 victory at Anfield, a certain Daniel Sturridge was on the mark for City in the second game, but the young Reds held on to win.

Bobby Duncan netted a dramatic stoppage-time winner as Liverpool edged Pompey in St Helens. Duncan opened the scoring before turning provider with a superb assist for Abdi Sharif to make it 2-0. A spirited Portsmouth outfit came back, though, and were soon level but with extra-time looming, Paul Glatzel set up Duncan to win it.

Glatzel struck a brilliant hat-trick and Rhys Williams also powered home a header as Lewtas' side eased into the next round with a comfortable victory in St Helens.

Once again, prolific duo Glatzel and Duncan proved the difference in a tight tie at Chester FC's Swansway Stadium. Captain Glatzel opened the scoring with a spectacular strike and Duncan made it 2-0 with a clinical finish to make sure of a quarter-final spot.

The goal of the night belonged to Duncan - although it was with special thanks to his strike partner. Glatzel was clean through on goal and looked set to complete his hat-trick, but the skipper instead squared to Duncan, who slotted into the empty net.

“That summed up what we are all about,” a beaming Lewtas said after the game.

Anfield was the stage for a last-four win over Watford. The final scoreline didn't tell the full story as Liverpool dominated throughout and could have scored more.

In the end, Glatzel's double at the Kop end - which took his tally in the competition to eight - proved enough to secure a place in the final.