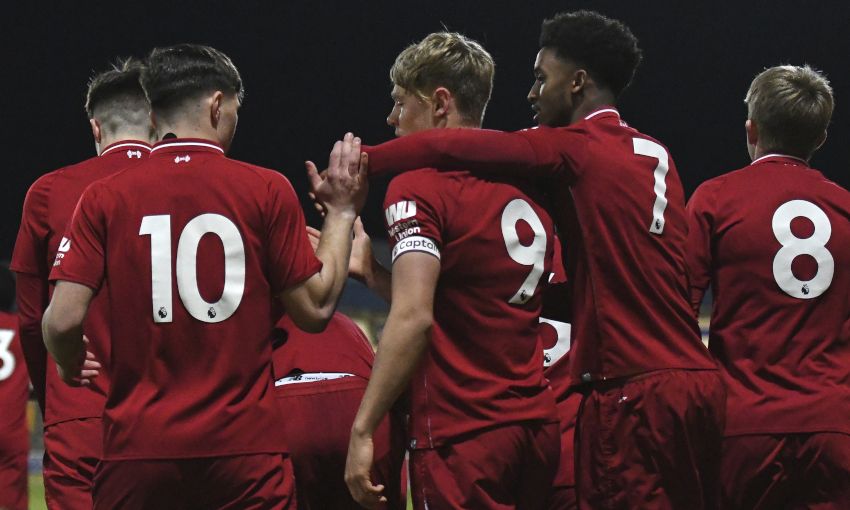 Liverpool moved into the quarter-finals of the FA Youth Cup with a 2-0 win over Wigan Athletic in a keenly-fought fifth-round clash on Wednesday night.

In-form strike duo Paul Glatzel and Bobby Duncan did the significant damage for Barry Lewtas’ team once again, their goals in the opening quarter-hour proving the difference.

The young Reds, who weathered pressure from the visitors in the second half, will now face Bury away from home in the last eight of a competition they last won in 2007.

Lewtas spoke in the build-up to the tie of Duncan and Glatzel’s tendency to steal the headlines with their goalscoring exploits and the pair wasted no time in doing so again at Swansway Stadium.

Fewer than five minutes had elapsed when the latter opened the scoring.

Luis Longstaff’s forward pass came to Glatzel at the left side of the Wigan area and the captain deftly turned into a shooting position before rifling a rising effort past the grasp of goalkeeper Bobby Jones.

And the Liverpool No.9 turned provider for his strike partner on 12 minutes, collecting Abdi Sharif’s pass in between the lines and picking out Duncan with a horizontal pass from the right.

He coolly cushioned the ball under pressure and dispatched a firm hit off the inside of the far post and into the net to double the lead.

Longstaff threatened a third when he twisted inside Victor Maffeo, who recovered to divert the eventual attempt wide, though Joe Gelhardt sparked Wigan into life with a lengthy dribble and poke at goal that Vitezslav Jaros tipped away.

Jack Walls’ honesty perhaps denied the Reds a penalty, the full-back bumped by Luke Robinson as he moved onto Glatzel’s flick and had a shot from a narrow angle repelled by Jones.

Charlie Jolley had the ball in the net for Wigan but was judged to have fouled Morgan Boyes as he raced onto a long kick and dinked over Jaros, and Rhys Williams’ nudge at goal from Leighton Clarkson’s corner was cleared off the line.

In the final action of the half, Sharif’s driven delivery from the right flank was spilled by Jones but neither Duncan or Glatzel could force a rebound in.

Wigan’s growing threat continued into a second half that they dictated in the early stages, with Liverpool forced to show another side to their game: resolve.

Jolley came close to halving the deficit as he stepped in from the right-hand side at great haste and let fly with a thump that soared too high over the opposite upright.

But Lewtas’ charges’ game management told in the face of a test and, having remained dangerous on the counter-attack, they began to impose themselves again.

Jake Cain set off on a delicate dribble through the middle of the Wigan defence and looked a certain scorer until Emeka Obi produced a magnificent saving tackle.

Late substitute Elijah Dixon-Bonner almost put the tie to bed with a swerving strike that did not curl back enough to find the top corner and Duncan drew a save down low from Jones.

But Liverpool had done enough – they preserved their two-goal lead across seven minutes of stoppage-time to march into the Youth Cup quarter-finals.