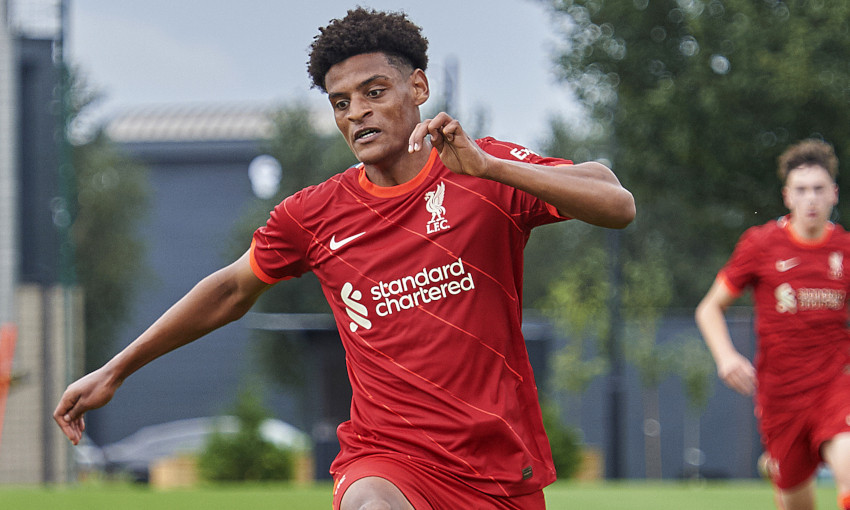 Liverpool U18s were beaten 5-2 by Leeds United in a hugely eventful U18 Premier League North clash on Saturday afternoon.

Having had three golden opportunities to strike in the opening 15 minutes, the young Reds fell behind to a Cian Coleman effort midway through the half and then lost Isaac Mabaya to a straight red card.

Coleman soon doubled his and Leeds’ tally, only for Oakley Cannonier to respond with his 11th league goal of 2021-22 and give the visitors a platform to battle from after the break.

But Ben Andreucci (two) and Luca Thomas added their names to the scoresheet to secure the points, despite a late consolation from Terence Miles.

Marc Bridge-Wilkinson’s Liverpool side stepped out at Thorp Arch determined to bounce back from defeat against Derby County earlier this week at the first opportunity.

And on another day they might have been three goals in front by the quarter-hour.

Cannonier skewed wide of the right post when invited to bound towards goal from an incisive Harvey Blair forward pass, before the prolific No.9 was involved in a classic goalmouth scramble.

Luke Chambers picked the perfect time to overlap on the left and his low delivery into the Leeds box found Cannonier, who again misjudged his finish – or, perhaps, showed remarkable unselfishness with a pass.

The ball came to Melkamu Frauendorf, whose attempts to convert from close range were brilliantly blocked by Connor Ferguson and then Jeremiah Mullen.

Next, Cannonier tried to turn provider with a delightful threaded pass in behind for Frauendorf, but his low shot on the angle was blocked by the feet of goalkeeper Harry Christy.

And the momentum in the contest swung significantly with two quickfire incidents.

First, Coleman put Leeds ahead as he collected possession near the halfway line and was able to carry the ball to the edge of the Liverpool box before dragged a finish across the grasp of Fabian Mrozek.

Within moments, Mabaya was dismissed by the referee, the Reds man having mistimed a sliding tackle on Morten Spencer after a heavy touch.

The home side wasted little time in trying to make their numerical advantage pay, and Coleman hooked a clinical strike past Mrozek for 2-0 before Luca Stephenson had to make a crucial clearance as Ferguson waited to knock home Andreucci’s cross.

Back came Bridge-Wilkinson’s team, though, and Cannonier offered them a lifeline on 37 minutes. Blair’s clever footwork preceded a pass through to Bobby Clark, who cut the ball back to the arriving Cannonier for a first-time hit through Christy.

Liverpool could have been level at the interval, too; Blair’s head was in his hands after he nudged off target when released one-on-one by an excellent Tommy Pilling set-up from deep.

Bridge-Wilkinson will have welcomed the chance to tweak and re-organise at half-time – but Leeds restored a cushion on the scoreboard just seven minutes after the restart.

Andreucci found himself space inside the Reds box to scoop up a pass and instantly whip it across Mrozek and into the far corner.

The visitors continued to try to bely their fewer numbers when possible, though contributed to their own downfall in conceding a fourth to Leeds on 66 minutes.

A short corner routine failed and presented the opposition with a chance to counter that they snatched with glee, Keenan Carole leading the charge and teeing up Thomas to find the net.

Liverpool still would not give it up and Christy had to rush from his line on 85 to thwart Cannonier, who had been set up to shoot by Stefan Bajcetic on a driving run from the back.

When the resulting corner was recycled, Frauendorf clipped in a cross from the left that was cutely prodded in by Miles, up from central defence, for a consolation near the end of a challenging game in which there was still time for Andreucci to conclude the scoring.