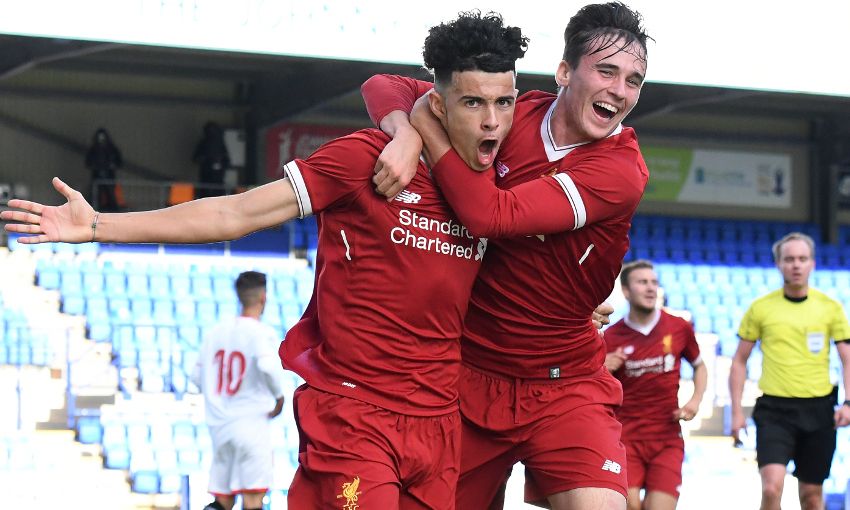 Liverpool U19s made a winning start to their UEFA Youth League campaign on Wednesday, beating Sevilla 4-0 at Prenton Park.

Curtis Jones' first-half double, netted either side of a Herbie Kane strike, gave Steven Gerrard's team a commanding half-time lead at the home of Tranmere Rovers.

And they added to it through Conor Masterson in the second period, putting the gloss on a fine performance in their first European outing of the season.

Gerrard was able to call upon two players who regularly train alongside the senior team in Ben Woodburn and Rhian Brewster, the pair featuring in a strong starting XI on the Wirral.

But that extra firepower counted for little in an evenly matched opening 20 minutes that saw both sides fluff one-on-one opportunities.

The first of those fell to Liam Millar, who did well to battle his way into the box but couldn't beat Alfonso Pastor Vacas. Luis Garcia Martinez, meanwhile, did not even test the 'keeper when he found space inside the Liverpool box.

However, those errant finishes were no sign of what was to come, with Liverpool stepping things up significantly to blow their opponents away before the break.

Woodburn proved key to the first, the young Welshman bursting down the right and sending in a cross that goalkeeper Pastor Vacas could only touch into the path of Jones, who did the rest.

A fine Kamil Grabara save from Javi Vazquez followed immediately, but the Reds were soon back up the other end doubling their lead.

On this occasion it was Kane who added his name to the scoresheet, the midfielder benefiting from Millar's incredible dribbling run off the left wing, finishing up after the Canadian's initial effort was stopped on the line.

And by the time the whistle sounded for half-time, the hosts had a three-goal advantage.

Jones again was the recipient of some good fortune in the ball falling to him but the Scouser still had some work to do in directing the ball home.

Sevilla provided a sterner test in the opening exchanges of the second half, the Spaniards clearly having been told to close space and prevent the Reds adding to their tally.

But they were undone again just past the hour mark as defender Masterson brilliantly controlled Woodburn's free-kick delivery on his chest before producing a centre-forward's finish to make it 4-0.

The Reds subsequently saw off a late Sevilla push for a consolation to add a clean sheet to a pleasing victory.