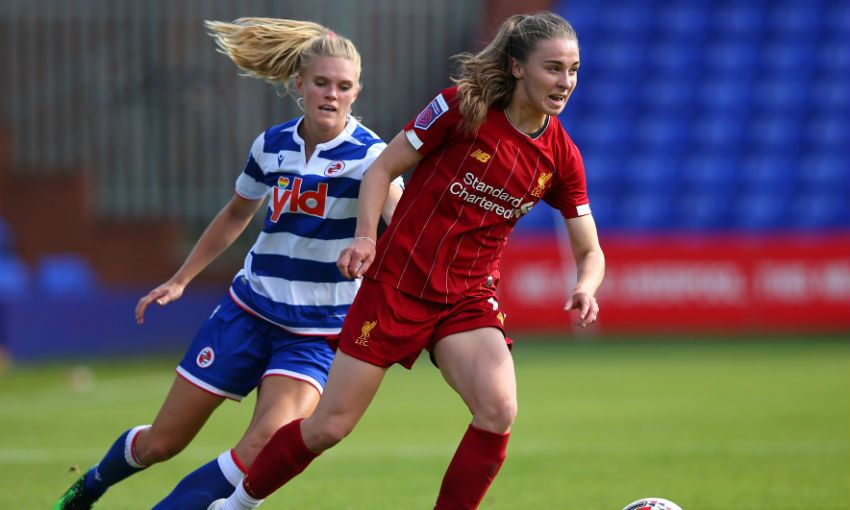 While the Reds narrowly lost out by a single goal to Reading, there were close matches across the division in front of record WSL crowds.

Charles and her Liverpool teammates travel to newly-promoted Tottenham Hotspur Women on Sunday fully aware that a very tough game lies ahead.

The 20-year-old forward said: “We’re really looking forward to it. They’re a new team and did well last week against Chelsea [a 1-0 defeat].

“Across the WSL, the competitiveness of the league showed in the scorelines. There’s no easy games, we’ll be going there hoping to put some points on the board but you’ve got to work for everything this season.”

Charles herself believes she is benefitting from a full pre-season as she looks to put a difficult year with injury behind her.

The Centre of Excellence graduate said: “I came back at the end of last year but just to get a bit of game time. So it was nice to put in the foundations of a long pre-season, which is the first I’ve ever had properly as I’ve been in and out before.

“I feel good now. I’ve been working hard in the off-season, so hopefully that will count as the season goes on.”

It was a stunning free-kick from Fara Williams which decided the opener at Prenton Park, but Charles said it won’t stop the Reds continuing to put significant focus on set-plays.

And she feels there were plenty of positive signs in the performance.

“We put a lot of emphasis on set-pieces, it’s something we pride ourselves on defensively not conceding from, so it was frustrating to concede from one. But we’ll keep putting the time in because they’re so pivotal.

“Obviously it’s disappointing to come away with no points, especially on the first day of the season. But when you take away the result, the performance overall definitely showed that pre-season had made a difference.

“The biggest thing was getting the three points and we didn’t get that. But looking ahead for the season, there were a lot of positives we can take from that game to build on.

“It was nice to see that we were creating problems for them, not just minimising the problems they were giving us.

“It’s nice to see the things we worked on in pre-season – being more dangerous in attack – being shown in games. Obviously we didn’t put the chances away but that’s something we’ll be looking to do, starting this week.”

Liverpool FC Women take on Tottenham Hotspur Women at The Hive at 2pm on Sunday.