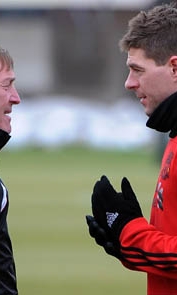 Kenny Dalglish, Steven Gerrard and Jamie Carragher made their names by letting their football ability do the talking - but the trio are set to turn their hands to acting in a forthcoming movie based around Liverpool's 2005 Champions League final triumph.

Set to be released this summer, 'Will' tells the story of 11-year-old schoolboy Will Brennan - a rabid Liverpool fan whose knowledge of the game outstrips even that of his football-obsessed classmates.

However, Will's life is turned on its head when his long-absent father, Gareth, reappears in his life, complete with two tickets for the Champions League final in Istanbul.

But before they can re-open their relationship, Gareth passes away suddenly.

Heartbroken, Will decides to make the arduous trek to the Ataturk Stadium on his own in honour of his late father and also to be with his beloved Reds.

En route, he encounters Alek, a former Yugoslavian football star who gave up the game following the civil war in his country.

Despite his initial reluctance, Alek finds himself inspired by Will's heroic journey and agrees to take him to Istanbul. And thus this unlikely pair of underdogs takes to the road, battling fate and fortune in a desperate bid to prove to themselves that it's never too late to dream.

Click the image below to watch the FREE trailer for Will 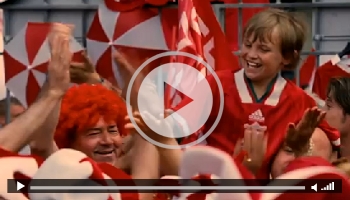 Starring the likes of Damian Lewis, Bob Hoskins, Kristian Kiehling and Perry Eggleton, much of 'Will' was filmed on location at the Ataturk Stadium.

Director Ellen Perry explains: "The match at the Ataturk Stadium where Liverpool came from three goals down to beat AC Milan on penalties was epic, operatic, impossible but also true.

"The more we learned about it, the more it seemed the perfect setting for and culmination of Will's journey. Emotional, exotic, and watched by hundreds of millions worldwide - this was a massive stage on which we wanted to tell an intimate story of one boy's loss and redemption.

"But beyond the 2005 final, Liverpool FC has a special relationship with its fans. Its anthem, 'You'll Never Walk Alone' encapsulates Will's story, and exhorts one and all to never give up, to never quit on your friends and family, to always strive to be your best. That's not a bad outlook.

"Of course there are many other big clubs in Europe and around the world. But Liverpool made the most sense. The Istanbul final made even greater sense.

"And having King Kenny Dalglish appear both as a distant memory and also in the flesh was like a gift from the heavens."

Gerrard and Carragher recorded their scenes in a one-day shoot in Liverpool, while Dalglish journeyed out to Istanbul to film his role.

"The players and Kenny were sensational. As they are used to playing to packed stadiums, their coolness showed," added Ellen.

"Kenny Dalglish came to Istanbul for his scenes. He was also a model of decorum, and delightful to work with.

"I remember one of our crew members saying, "I found myself looking at King Kenny's legs, and thinking, Wow, the King's legs." The crew member had grown up a huge Liverpool fan, and Kenny was his idol.

"We had some idea of the stardom of Kenny (as well as Steven and Jamie), but witnessing it firsthand was something else. They are as big as rock stars, but also exceptional human beings.

"As we had a lot of boys on the set both as actors and extras, it was especially gratifying to see how patient and kind the players and Kenny were with the youngsters." 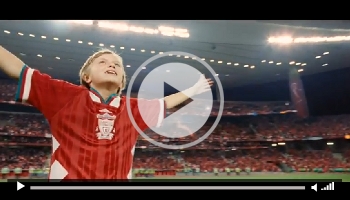 Dalglish, Gerrard and Carragher got involved in the project after the filmmakers contacted Liverpool's Managing Director Ian Ayre via Paul McGrattan, a close friend of the Reds trio who also has a part in the movie.

"The film was first mentioned to me through the football club and we got excited when we heard about the script and went from there really," said Gerrard.

"It (acting) was difficult for me because I'm out of my comfort zone. It's not natural to me but the more I do I gain a bit more confidence. Directors help too with tips and encouragement.

"We are just so proud of that night in Istanbul. It gives a great message out to kids to never give up even if you're being beaten by a load of goals or anything that life throws at you, you can turn it round if you keep trying."

Carragher added: "The game was a very special game and I'm sure in years to come there'll be things popping up about that match. It is a small bit of the film but I still feel it will do well.

"A lot of football films are hard to re-create when you watch them on film and I think it's good that this film is about the journey and how they got there, we all know what happened in the game.

"I think everyone's seen it a million times so I think we all know now so it's good to have a little bit of it in the film."

Dalglish admits to being somewhat taken aback by the workload involved, but the King is delighted with the end product.

He doesn't, however, anticipate a career in Hollywood once his footballing days are over.

Dalglish joked: "It's my first and last film, might as well get them both in at one time!

"The cast and crew have been patient with me because it's not something I feel too confident with, having to learn lines and speak lines but the good thing is they allow you to have a bit of licence yourself and use words I am more accustomed to using than what is in the script but that mean the same thing."

So how did the King of the Kop end up adorning the big screen?

He explained: "I got a phone call from Paul McGrattan who said that Steven and Jamie were doing a bit and did I want to come in it?

"He explained a little bit about it and said obviously it's coming back to Istanbul for a young lad who couldn't get a ticket and could I help out so I said it's not a problem I'll have a go.

"Actually I don't think I did my homework, I didn't anticipate what I was letting myself in for, I got sent a script and I never read it and then I got sent an e-mail and I never read it so it was my fault really! I didn't know there were so many words to come out of my mouth for the movie. But, as I say it's really interesting to see how a movie is made.

"It's about a little boy who hasn't had the best life and he comes out to see a little bit of excitement from football. It's not really about football, it's about life and I'm sure a lot of people can relate to the story themselves."

Will hits cinemas later this summer - stay logged on to Liverpoolfc.tv for details.