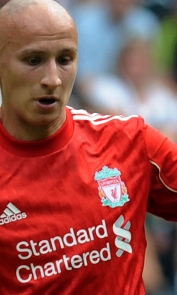 'We all want the same thing'

Jonjo Shelvey has revealed how much he has enjoyed his first season as a Liverpool player and vowed to repay Kenny Dalglish's faith in him during the coming years.

After making 19 appearances so far, the 19-year-old has had a promising debut season and he is clearly a player rated highly by the manager.

He told LFC Weekly: "I think it's gone quite well. I think I've had some ups and downs but overall I'm pleased with it.

"I thought I'd find it a lot more nerve-wracking then I have but everyone around the city and around the club has been very welcoming and they have made me feel at home. It's a family club and a great club to play for.

"When I was at Charlton I suppose I was fearless but this is stepping up a couple of levels."

Shelvey is first and foremost an out and out midfielder but he has shown his versatility by coming off the bench to play at left-back during the victories over Birmingham City and Newcastle United, which prompted Kenny Dalglish to jokingly compare him to Roberto Carlos.

The teenager insists that he is humbled to receive as much game time as possible, no matter what position he is asked to fulfil.

He added: "I think it's come about because I have energy to run up and down and am quite strong and versatile so I'm happy to fit in wherever.

"When you play, you play don't you? It's all game time which you want and which you need.

"The manager just said to me: 'Have you ever played left-back?' I said: 'No, but I will.' I suppose that shows good enthusiasm but I'll play wherever."

Liverpool take on Tottenham Hotspur on Sunday in the final Anfield game of 2010-11 knowing that a victory will guarantee European football is back in L4 next season.

"Myself and the other younger boys all want to get into Europe because it's more game time for us," he added.

"I can understand the argument that only having the league to focus on might help the team to concentrate solely on getting into the top four next season and play in the Champions League again.

"But as a footballer you want to play as many games as possible, travel abroad and play in big games and we have experienced that this season.

"Liverpool Football Club has always been associated with Europe so it would be nice to continue that."