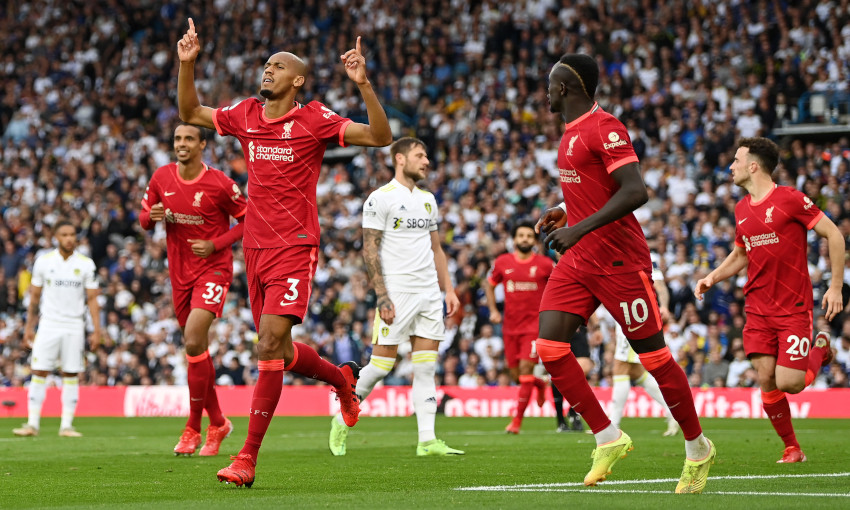 Fabinho's goal in Sunday's victory at Leeds United provided a poignant moment for the Liverpool midfielder to honour his late father.

Pouncing on Virgil van Dijk’s knockdown from a corner, Fabinho prodded home the Reds’ second strike of an eventual 3-0 win at Elland Road five minutes after the interval.

The No.3 immediately pointed to the sky as he embarked on a celebration that held significant meaning following the passing of his father last month.

“It was a special moment for me,” Fabinho told Liverpoolfc.com post-match. “Of course, I was thinking about my dad and my mum as well because she is in Brazil now.

“I just wanted to score for my mother and for my father as well. After I scored I wanted to look up and dedicate this goal to the sky to God. I want to thank God because when Alisson scored [last season] he said it was a gift from God and I believe the same as well.

“It was a special moment for me.”

Fabinho had initially been set to sit out the Premier League contest in Yorkshire, until the Brazilian Football Confederation withdrew a complaint to FIFA after he, Alisson Becker and Roberto Firmino did not participate in their country’s most recent fixtures due to COVID-19 quarantine restrictions.

And he was delighted to be able to contribute to a result that increased Liverpool’s points total to 10 from a possible 12 so far in 2021-22.

“We prepared for the game and we were ready to play,” he explained. “Some moments I was in the starting team and some moments we had to change because we didn’t know if I was able to play.

“I was happy I could play for the team because I scored our second goal and I’m happy with the team performance and with my personal performance as well.”

Fabinho’s effort early in the second half was sandwiched by goals from Mohamed Salah and Sadio Mane as the Reds produced a confident showing at a difficult opposition ground.

The victory was overshadowed by a serious ankle injury to Harvey Elliott that saw the 18-year-old stretchered off and taken to hospital, with surgery now required.

Jürgen Klopp’s side will still carry the positives from the display into their forthcoming hectic fixture list, which includes a Champions League tie against AC Milan at Anfield next up, said Fabinho.

“It’s a really good start [to the season] and it was important to keep the clean sheet here again,” he added.

“We played against a really good, offensive team, so it was important the way we controlled almost all the game. So for the team and for our confidence, it was a really good win.”