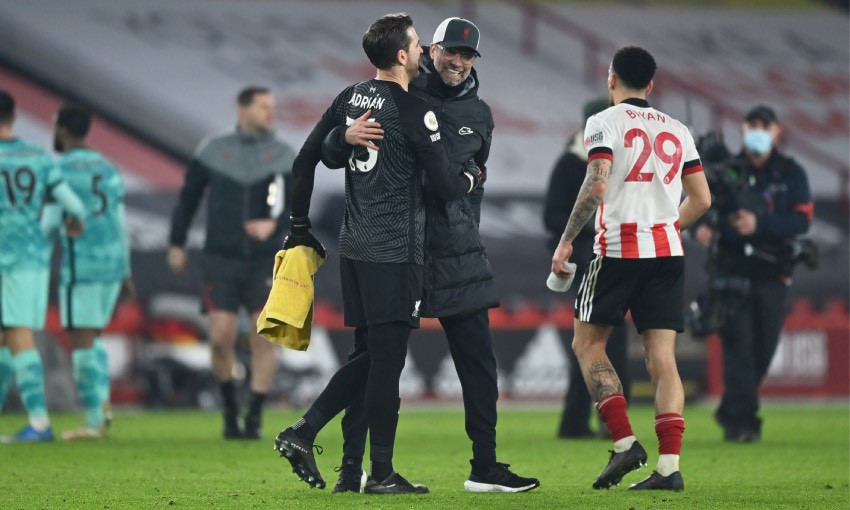 Adrian feels Liverpool displayed their true heart and character by securing a 2-0 victory away at Sheffield United on Sunday.

The Reds returned to winning ways in the Premier League after a testing run, earning a deserved set of three points at Bramall Lane with two second-half goals.

It was a result preceded by continued hard work behind the scenes as Jürgen Klopp's squad sought to put things right domestically.

"We have been working so hard," Adrian told Liverpoolfc.com. "The last few weeks we have had some bad results but the team were together.

"We were working even harder than before and we showed today how resilient this squad is – getting back from a bad situation. This was a massive three points and back to a clean sheet again.

"That is the mentality that we have to show – everyone, not just experienced players. Obviously we can show the younger ones as well.

"This season was never easy from the beginning but we come back, we are here again, we have got a great three points. Let's enjoy it and let's recover for the next one."

Adrian stepped into the starting line-up for the first time since October for the encounter in Sheffield, with Alisson Becker absent on compassionate grounds.

The Spaniard continued: "To be fair, my mentality and character always was the same the moment when I signed for Liverpool. You need to be ready for anything and try to help the team as much as I can.

"The manager gave me the opportunity and this time it was the situation with Ali and his dad passing away. So obviously we have to be ready as always and everyone pushes each other. That was my opportunity tonight.

"I'm really happy, not just for the clean sheet and the three points, but for the work from all the lads."

Well earned 3️⃣ points tonight... happy to be back between the sticks again getting a lovely clean sheet, this one… https://t.co/z9WFGIosMJ

Adrian and Liverpool's 18th central-defensive partnership of the season recorded a well-earned clean sheet against Chris Wilder's side.

The goalkeeper felt constant communication with centre-backs Nathaniel Phillips and Ozan Kabak was crucial in keeping the Blades out.

He said: "That is critical because the communication with the defenders and goalkeeper is made by playing game after game, always together.

"As you know, we have many injuries in the defensive line. They did a great job as it's not easy to fight those strikers jumping at you for the ball and fighting for every one.

"They did a great job, and Nat and Ozan can be proud."